What’s a Parent to Do?

In just a few short weeks, 9th grade students will be arriving at Irvine’s new, $300 million, Portola High School. This high-tech school located on the former El Toro Marine Corps airbase has been built on a 40-acre site now known to be contaminated with neurotoxicants and carcinogenic petrochemicals such as toluene, benzene and other volatile organic compounds (VOCs) that are especially damaging to the health of young people and pregnant women.

Although deemed by Irvine Unified School District’s (IUSD’s) environmental consultant and officials at the California Department of Toxic Substances Control (DTSC) to be at “low” concentrations — and thus “not hazardous” to the health of the school’s occupants — testing has been performed in only a relatively few locations, with no testing at all under the school buildings. DTSC officials have acknowledged that, over time, concentrations of VOCs underneath buildings can be expected to penetrate through cracks, fissures and utility connections in the school foundation, with vapors intruding into buildings occupied by teachers, staff and students.

Even though large quantities of contaminated soil — over 100 truckloads — were accidentally discovered and removed during several trenching operations, areas on the school site with possibly higher concentrations of toxic contamination have not been identified. Instead, the DTSC went along with the School District’s ludicrous explanation that the contamination was caused by Irvine Ranch Water District (IRWD) recycled water used during agricultural operations. That claim was refuted within 24 hours by IRWD’s Water Quality Manager.

Photographic and testimonial evidence indicates that the most likely sources of the site-wide toxic contamination at Portola High School are the operation and maintenance of military aircraft from 1943 well into the 1960s — and the direct dumping of fuels and solvents onto the ground.

How did we get to this dangerous and risky point? In 2011, the School District foolishly signed a conditional school-site purchase agreement without undertaking adequate testing for toxics. Remarkably, the purchase agreement included a hold-harmless clause fully protecting the developer who sold them the property from any claims resulting from soil contamination problems. In 2014, the DTSC approved an IUSD soil-testing program for the site, intended to detect contaminants only from agricultural operations, not the toxic petrochemicals used in military operations.

After false and misleading claims by both IUSD and DTSC that the Portola High School site had been thoroughly tested, I obtained and compiled lab reports for all soil testing performed on the site. These reports revealed that the 35-acre interior of the site had never been tested for toxic VOCs used in military operations!

It was a letter written by former Mayor and Councilmember Larry Agran to Governor Jerry Brown in August, 2015, that began a lengthy process ending with a remarkable March 2, 2016 letter from DTSC Director Barbara Lee on behalf of CalEPA Secretary Matthew Rodriquez to the IUSD. This letter actually overturned the previously DTSC-approved assessment of the site as having been used only for agricultural purposes. The letter and specific orders required preparation of a work plan — with public and stakeholder participation — for testing the interior of the school site.

IUSD consultants and DTSC subordinate officials ignored the orders and, without the required public participation, prepared a completely inadequate soil-testing work plan (just 10 test locations). The work plan was presented as a fait accompli by IUSD and DTSC officials at a March 22nd IUSD Board meeting. After a public uproar from angry residents, a week later a work plan was presented with 17 sampling locations for sub-surface soil-gas testing of the 40-acre site. Testing began almost immediately afterwards, again without public monitors or any public participants.

The results of the testing, which I obtained by means of a California Public Records Act request, showed that every one of the widely separated 17 soil-gas test wells contained measureable levels of various combinations of toxic VOCs. It’s important to note that on a clean school site, there would normally be no detectable VOCs in the soil.

Unfortunately, none of the 17 soil-gas test wells was located under a school building. And since IUSD and DTSC have decided not to conduct additional testing, the sources of the site-wide toxic contamination — including areas of higher concentrations of toxics on the school site — remain unknown.

In a further attempt to gain traction with the DTSC Director, Agran sent another letter on June 9th, this time to CalEPA Secretary Matthew Rodriquez, explaining that the orders sent to the IUSD by DTSC Director Lee on his behalf have not been fully implemented. Agran requested the State’s urgent intervention — with no response to date.

It is astonishing that the Irvine Unified School District, backed by the State, is taking this monumental health risk when it could have been so easily avoided by the timely and proper testing of the property years ago. It now remains up to the residents of Irvine, especially parents whose children are assigned to attend Portola High School, to decide whether they are willing to subject their children to this kind of risk. It also remains up to them to persuade the IUSD Board to do the right thing. IUSD should begin more extensive testing on the site, including under the buildings, and should also install continuous air-monitoring systems in the school buildings. 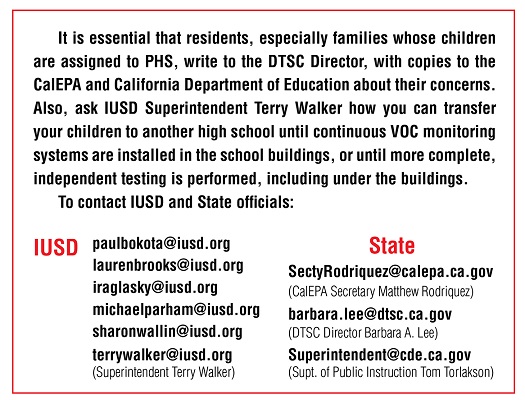 For latest updates, references and documentary materials: www.TestForToxics.org and subscribe!