Is the Long-Promised State Veterans Cemetery in Irvine Dead? ABSOLUTELY NOT!

NOTE: This article was submitted by Mr. Liss on behalf of the Build the Great Park Veterans Cemetery Citizens’ Committee. 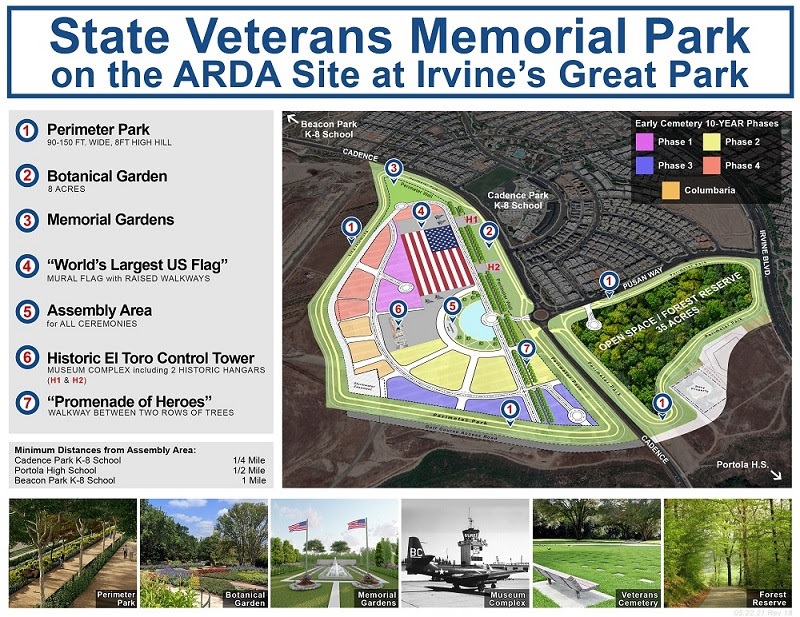 Despite continuing propaganda from developer FivePoint and their surrogates, Irvine residents have always supported the 125-acre ARDA site.

Back in 2017, our all-volunteer Build the Great Park Veterans Cemetery committee was founded in response to FivePoint’s first scheme to get their hands on the ARDA site for massive office, industrial, commercial, and apartment development. FivePoint hatched a deal with City leaders (led by then-Mayor Don Wagner) to give FivePoint the ARDA site in exchange for an inferior site alongside the noisy I-5/I-405 freeway interchange.

We gathered 19,140 signatures of Irvine residents — forcing the City to put their scheme with FivePoint on the ballot. During that campaign, FivePoint created a “veterans” PAC (VALOR) with an initial investment of $800,000 in an attempt to deceive voters into believing veterans didn’t support the ARDA site. But Irvine voters saw through the lies and defeated that horrible scheme (Measure B) overwhelmingly — with 63% of Irvine voters saying NO!

When City leaders refused to implement the will of the voters after the 2018 election, our committee got back to work and gathered 19,790 Irvine resident signatures — forcing the City Council, on May 12, 2020, to make the ARDA site the only legally available property in Irvine for a Veterans Memorial Park & Cemetery.

Now, FivePoint has hatched yet another scheme which involves moving the Veterans Cemetery out of Irvine altogether, banishing it to another inferior site. This time, FivePoint wants to put it alongside the noisy, polluted 91 freeway, a few miles from Riverside County in Gypsum Canyon. Orange County Supervisor Don Wagner — the former Irvine Mayor who started this whole mess on FivePoint’s behalf four years ago — is acting as head cheerleader for this latest scheme.

Based on our committee’s research, we have concluded that it is extremely unlikely that any cemetery can be built at Gypsum Canyon. According to studies from the Orange County Cemetery District (OCCD), the site is highly problematic because there are major geotechnical issues with the property. It is a landslide area and there is a lack of existing infrastructure. We have also discovered that the site is located in the middle of a high fire hazard zone. Moreover, the wording in the original gift deed from the land’s donor does not indicate that a cemetery is a permitted use.

Our committee represents tens of thousands of Irvine veterans, their families, and residents. Through the ballot box and the petition process, the people of Irvine have repeatedly made it clear that we support the ARDA site. All that stands in the way of finally beginning construction of the voter-approved Veterans Memorial Park & Cemetery on the ARDA site is a vote by three (3) members of the City Council to “Build it NOW!”