What is universal single-payer healthcare insurance?

A universal single-payer healthcare insurance program is a system where everyone receives their healthcare free of charge or at low cost.  It’s called “single-payer” because a single entity — usually a government — pays all the medical bills from dedicated tax revenues.

In the U.S. we have some examples of single-payer systems, but only for certain limited groups of people.  For example, Medicare is a federal government-run system that provides healthcare insurance for people over the age of 65 and for those with disabilities.

Medicaid is a similar program that provides healthcare insurance for middle-class and lower-income Americans of all ages.  However, Medicaid provides much lower rates of reimbursement to medical providers, often resulting in difficulties in obtaining medical services.  The government does not directly provide any medical services under Medicare or Medicaid; those services are provided by private practitioners, and by for-profit and non-profit hospitals that are then reimbursed by the government.  On the other hand, the U.S. Veterans Administration (VA) is an example of a single-payer system that provides the actual medical services — not just medical insurance — to qualified veterans, without charge. 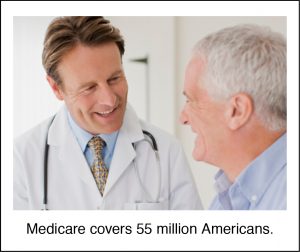 Medicare, acting as a giant insurer, pays for physicians, hospitalizations, and prescription drugs by reimbursing the medical service providers.  Or, alternatively, Medicare pays an approved health insurance company a fixed amount per person that, in turn, pays the medical bills.  The former arrangement is called “original Medicare,” while the latter is called an “Advantage Plan,” and is provided by a Health Maintenance Organization.  Advantage Plans vary in the services they provide with low-cost or no-cost patient co-pays, but tend to restrict access to high-cost treatments.  Advantage Plans also require a “gatekeeper” — a primary care physician who must first approve specialist services before they can be provided.

The theory of the Advantage Plan’s indirect method for the government to pay for healthcare services is that it reduces wasteful spending, because healthcare is managed by an organization rather than by the individual patient.

I’ve been enrolled in Medicare since 2006.  I enjoy the ability to select my physicians and specialists and have never been thwarted by Medicare in my selection of services.  I also notice, when I receive medical bills from Medicare (for informational purposes only) that the amount billed to Medicare by the medical services provider is sometimes four to ten times the amount approved by Medicare.  Also, questionable services are sometimes added to the bill.  For example, one bill I examined listed removal of a Q-tip cotton ball from the ear canal, that took 20 seconds, as “surgery” — for a charge (to Medicare) of $300!

In any case, health insurance of any kind is an absolute necessity to be able to reasonably pay for virtually any medical care in the U.S.  A patient has almost no negotiating power.  After all, how does a patient negotiate pricing while lying on a gurney in the emergency room of a hospital?  And, there are no price lists in doctors’ offices or hospitals.  We’ve all read true stories about uninsured people who received enormous medical bills in the tens of thousands of dollars for short hospital stays.  Those result from patients getting “list price” bills, with charges that could be many times what an insurance company would pay.

Attaining a single-payer system for all

Since Medicare seems to work so well for the population it serves, it would seem that the easiest-to-implement system for expanded healthcare coverage would be to reduce the age at which Medicare kicks in, say, from 65 to 55.  In fact, it has been suggested that if the age at which Medicare becomes effective is reduced incrementally a year at a time, the disruption to the health insurance industry, and the rate of increased costs to the government could be controlled.  Simultaneously, Medicare health insurance coverage could begin for newborns, and increase year by year until it meets the gradually-reducing age of eligibility at the high end.  When everyone is covered, it would become a Medicare for All program.

In the U.S., state and federal governments typically claim they don’t have the funds to cover everyone in a Medicare for All system.  This objection could be addressed by changing government spending priorities and increasing taxes to pay for the huge health insurance premiums that employers and employees are now paying privately.  Savings are also realized by the more efficient administration under a single-payer system.  All of these single-payer systems, Medicare, Medicaid and the VA have problems that must be corrected; but, on balance, single-payer health insurance systems are very popular.

Like it or not, our country will continue to have an ongoing conversation about single-payer health insurance for years.  We can all take part in that conversation.  In fact, Irvine Community News and Views has commissioned its own polling organization, the Irvine Community Poll, to survey our readers on important questions.  We want to know what YOU think.  (See red box, below.)

Next month’s article will discuss The Healthy California Act (SB 562), a proposed statewide version of single-payer healthcare insurance, including major changes in the  structure, cost and funding of healthcare.