Each time I investigate another of Irvine’s senior services, I am more astonished, amazed and astounded.  But by now, I’m not surprised.  In addition to the other services I’ve written about, the Lakeview Senior Center (LSC) houses the non-profit, Irvine Adult Day Health Services, Inc. (IADHS).  Their website – irvineadhs.org – describes their services as: “structured adult day programs in a safe and encouraging environment for seniors and disabled adults, while they continue to live in the comfort of their own home.  In addition, we also offer counseling services and support groups for family caregivers.”

The Person Who Knows Best

To find out the quality of a service, it’s always best to talk to the people who experience it — the participants.  So, I talked to John Inmon, 85, who recently enrolled in IADHS.  When I talked to John, he had already participated in many different activities.  John happens to be the fellow who had a street in Irvine named after him – John Inmon Way. This was in honor of his many years of service to the IUSD as beloved Principal of several Irvine schools. 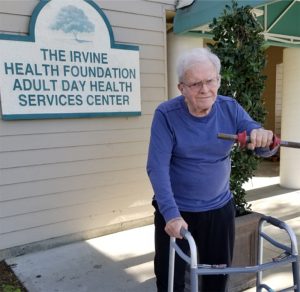 John described one physical therapy session involving about 20 seniors, divided into one group that was performing various exercises with a physical therapist, tailored to each individual, while another group was working on the various machines — stationary bicycles, stair steppers, treadmills.  Then, they switched activities.  John described a later session in which he said he was playing “games.” But that is better described on irvineadhs.org, and confirmed by John, as activities that “present ‘fun’ social and therapeutic activities that challenge a participant in a variety of ways to promote socialization, cognitive stimulation, independence, and encourage new friendships.”

Prior to enrolling in the IADHS, John participated in a Medi-gap insurance-funded, private facility.  He described the differences as dramatic.  At the private facility he said that he was left alone most of the time.  John stated, “The staff showed no interest in me, just ignored me, and was very lackadaisical.”

In contrast, he said, at the IADHS facility, the staff treated him as an “honored guest,” constantly attentive to ensure that everyone’s needs were met while keeping everyone involved.  John described the entire staff as “extremely accommodative.  Everyone is encouraged, but no one is forced to do anything.  And no one is just left alone to sit.  It’s a great atmosphere.”  John went further in describing the staff as “incredibly well qualified, always positive and very knowledgeable.”

Before enrolling in the IADHS program, participants must undergo an in-depth assessment that John said was “to ensure the staff really gets to know the person.”  The program is offered Monday through Friday; however, no one is required to attend all five days, although some do.  The staff recommends attending a minimum of two days per week (Tues & Thurs) or three days per week (Mon, Wed, Fri).

The Center provides breakfast, lunch and a snack.  The facility opens at 8am, while the programs begin at 9am, continuing until 3pm; but, every day is different.

According to the website, “The Center charges a daily fee for service for both the social day program and the health care program.  Prices vary according to each program.  The social day program fee structure includes private pay and long-term care insurance, as available.”  For further information, call Jill Upton at 949-262-1123×662, or reach her at jupton@irvineadhs.org. 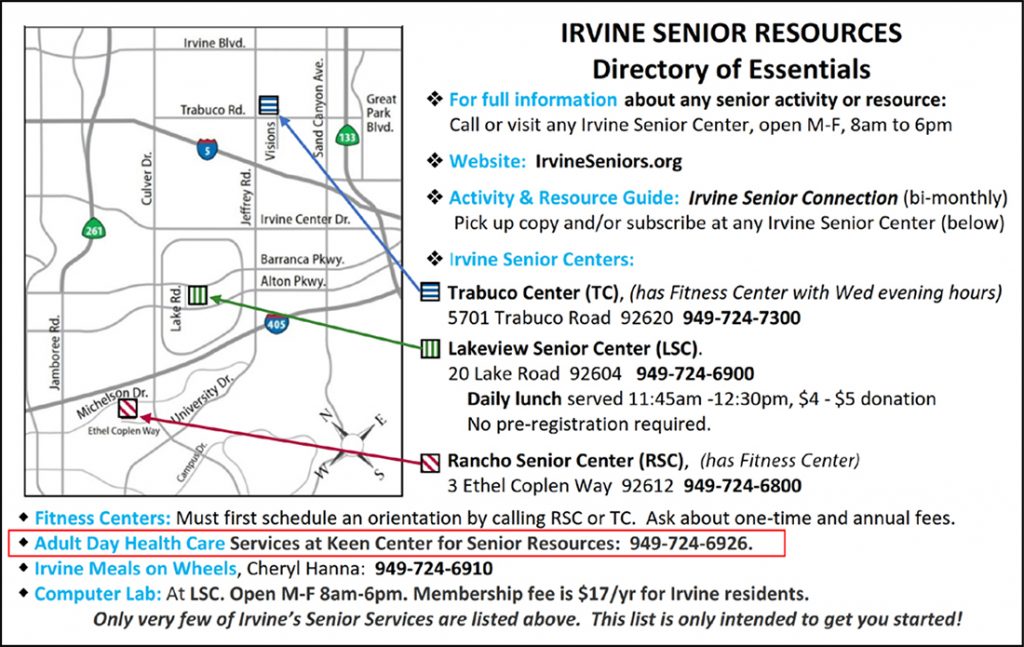