A year ago, when a former senior Orange County school facilities official was asked his opinion about Site A — the designated location for Irvine’s next high school — he looked at the map and said, “The Irvine School District has chosen the very worst place in Orange County to build a school.”  According to this long-time official, locating Irvine’s next high school at the former El Toro Marine Corps Air Station — just 750 feet from an old military toxic waste dump (IRP Site 3) and near the end of runways that were used for half a century — “would be a terrible mistake.”Capture IUSD

Why?  “Because,” he said, “It’s well known that the military dumped everything at the end of the runways — it was a dangerous place for kids when the Airbase was operational.”  And it’s a dangerous place to locate a school today.  He wondered aloud “why anyone in their right mind” would put a school there, “when it’s virtually guaranteed that there will be problems sometime in the future.”

The future is now.  Irvine Unified School District’s (IUSD) Portola High School is in the preliminary stages of construction at Site A, along Irvine Boulevard just outside the northeastern edge of the Great Park.  Now, new discoveries of toxic contamination raise many questions about the earlier IUSD and State certification of Site A as absolutely safe for a $300 million high school.
A Toxics Email Trail

On Nov. 13, 2014, when construction workers were excavating soil to install a massive concrete storm drain, they encountered toxic contamination, later described as “stained soil,” and stopped work.  An email later revealed that the contaminated soil stretched 29 feet onto the Portola High School site; and the contamination permeated the soil between a depth of 15 and 28 feet.  By the time the toxic discovery was removed for testing and disposal, a total of 78 truckloads of contaminated soil had been hauled away. 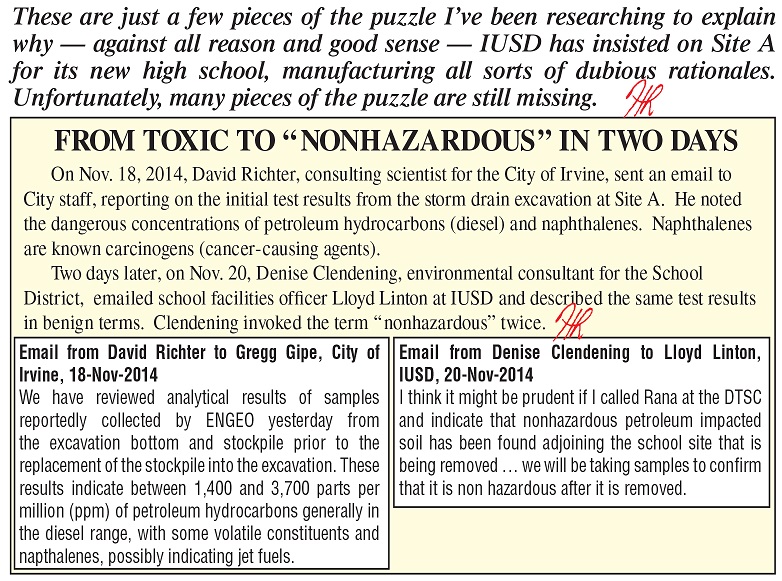 On Nov. 20, Denise Clendening, the environmental consultant to IUSD, described the contaminated soil as “non-hazardous.” Two days earlier, David Richter, Principal Environmental Scientist at  Ninyo & Moore,  the City’s own geotechnical and environmental consultant,   wrote:  “We have reviewed analytical results…These results indicate between 1,400 and 3,700 parts per million (ppm) of petroleum hydrocarbons generally in the diesel range, with some volatile constituents and naphthalenes possibly indicating jet fuels.”  [Under California’s Proposition 65, naphthalene is listed as “known to the State to cause cancer.”

So alarming was this discovery that in his Nov. 18 email Richter provided a strong directive to City staff:  “Based on the discovery of site soil contamination that was not anticipated by the DTSC [State Department of Toxic Substances Control] school site review and approval process, we recommend that the City assure that both the DTSC and the Irvine Unified School District are informed of this changed condition.”

Worried about the “changed condition,” he added these critical words: “Based on our experience, it is our expectation that the DTSC will reconsider its prior approval of the PEA [Preliminary Environmental Assessment] and will…only re-certify the site for school construction after it is satisfied that there is no significant risk to students or school workers.” [Emphasis added.]

This call for decertification and more thorough testing of Site A and the State’s reconsideration of its prior approval of Site A went unheeded by the City, by the School District, and by the DTSC.  For nearly four months — from November 2014 through February 2015 — the seriousness of the toxic contamination remained secret, until a Public Records Act request filed by this reporter brought the Richter memo out from the shadows.

A Pattern of Secrecy

When former Councilmember Larry Agran, a long-time outspoken opponent of Site A, was told of the Richter memo, he questioned why this was not immediately put in front of the City Council and School Board in public meetings this past November. “If it had been publicly disclosed last November, perhaps the headlong rush to build the new high school would have been halted so more comprehensive testing for toxic contamination could begin.  Obviously, the previous testing program was inadequate.”

The Portola High School toxics controversy reflects what Agran calls “a pattern of secrecy that risks the health and safety of future teachers, staff and students.”  He makes a “smoking gun” comparison of two Environmental Impact Reports (EIRs) that describe entirely differently the same toxic waste dump that is just 750 feet northwest of Site A, where Portola High is being built.

The 2003 EIR for the Great Park, prepared by the City, described IRP Site 3 as including, “municipal solid waste, scrap metal, incinerator ash, construction debris, paint residues, unspecified oily wastes, industrial solvents, hydraulic fluid, and engine coolants.”  Yet, the 2012 EIR prepared for Heritage Fields/FivePoint Communites to support its residential entitlement proposal for an additional 4,600 houses, deleted all reference to the contents of the landfill. It described IRP Site 3 as simply “the original former MCAS El Toro landfill, which was operated as a cut-and-fill disposal facility.”

When Agran and others tried to raise questions at City Council meetings, at School Board meetings, and in communication with IUSD officials, they were either ignored or scolded by Superintendent Terry Walker for getting in the way of building and opening Portola High School by September of 2016.

Agran says, “The low-point for me as a City Councilmember was November 26, 2013, when the City Council abandoned all pretense of good land-use planning.  On a 3-to-2 vote — I was joined only by Councilmember Beth Krom in voting “No” — Mayor Steven Choi and Councilmembers Christina Shea and Jeff Lalloway rammed-through approval of the questionable EIR and a massive amendment of the City’s General Plan that allowed FivePoint Communities to build 10,000 homes — many thousands beyond what was originally planned — at the Great Park.  Worse still, it also put the new high school at Site A.”

“Moreover,” said Agran, “I later learned there had been a major toxic contamination discovery in the Agua Chinon Wash adjacent to Site A just a month before our November 26, 2013 City Council meeting.  Agran concluded, “The nature and magnitude of that discovery — it included 1,2,4-Trimethylbenzene, a carcinogen, at nearly five times the unsafe level — was never brought to the Council’s attention.”

Agran added, “Approving that sanitized, falsified EIR may be catastrophic.  It risks the health and welfare of tens of thousands of future students, faculty and staff at Portola High — and nearby homeowners, too — by risking exposure to toxic waste contaminants from IRP Site 3 or other nearby sources, either off or on Site A.”
Legal Liability

The “exposure” to toxic contamination isn’t only a physical matter.  The City, as well as IUSD and others, risk tremendous legal liability for widespread disease, disability and deaths caused among faculty, staff and students from exposure to toxins emanating from City property.

Agran, a public interest and environmental lawyer, commented, “If, for example, a ‘cancer cluster’ or other disease clusters begin to emerge at Portola High School — just like they have at Beverly Hills High School and Malibu High School — the City of Irvine could be looking at open-ended liability possibly reaching into the billions of dollars, certainly enough to bankrupt our entire City.”

Agran asked the City Manager and the City’s special legal counsel for environmental affairs to confirm this understanding of the law.  When the City’s special counsel Robert Thornton did so, Agran asked that the Thornton memo be released to the public.  The Mayor and City Council — again on a 3-to-2 vote — refused to do so.  The special counsel’s memo and analysis — setting forth the laws and theories under which the City of Irvine could be held liable for any harm caused by toxic exposure — remains locked up at City Hall, unavailable to the taxpayers who paid for it.

Perhaps jarred by the discovery of toxic contamination at the storm drain construction site and at the Portola High School site, or because of pressure from others, the Department of the Navy (DON) had commenced preparations for testing of a portion of IRP Site 3 — known as Area C1 — that extends completely under Irvine Blvd. onto property owned by FivePoint Communities, where many hundreds of houses are now slated to be built.

At its Feb. 25, 2015 meeting, a report of this work was presented to the Restoration Advisory Board (RAB) — a local technical committee organized by the DON (with participation of the federal EPA, the State of California, and local citizens) to oversee the cleanup of the El Toro Airbase, a designated federal Superfund clean-up site since 1990.

Waste disposal Area C1, within IRP Site 3, was never excavated and consolidated onto the main (now capped) landfill. This is apparently because it lies under Irvine Blvd. and was inaccessible.

A preliminary work plan was presented to the RAB.  The work plan involves subsurface probes to determine the nature and extent of the waste.  After scheduled field testing in April and May, a report on findings and recommendations for proceeding is expected in June. 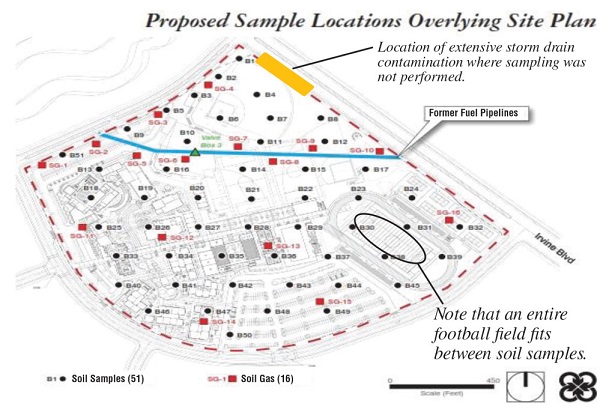 When asked about this latest development, former City Councilmember Larry Agran said, “It’s good that the Department of the Navy is going to do some additional testing.  But let’s face it, with each new discovery we’re learning that the toxic contamination and risks to future teachers, staff and students are even greater than we thought earlier.”  “Meanwhile,” he lamented, “IUSD and the School Board are pushing ahead — spending nearly $2 million per week building a school on a risky, contaminated site.”

When asked what’s next, Agran said, “I don’t know.  Of course, I think construction should be halted right now — just as the City’s geotechnical and environmental consultant, David Richter, recommended.  At this point, I think there should be a thorough investigation of this entire matter — by truly independent sources.”

Agran pulled out his notebook and pointed to a quote from the Safe School Siting Toolkit, published by the national Center for Health, Environment and Justice.  He then read aloud its categorical admonition that citizens and governing bodies “should exclude from consideration sites which are on top of or within 1,000 feet of a state or federal Superfund or Brownfield site, or a site where hazardous or garbage waste was land filled.”  Agran added, “It couldn’t be more plain, could it?”

When asked whether it’s just too late to change course, or even to stop construction and start doing more testing, Agran said, “It’s late all right, but it’s never too late to do the right thing.”