Irvine – From Master-Planning to Profit-Planning

Irvine – From Master-Planning to Profit-Planning

An ICNV Series On Climate Change

Irvine began its life as an exemplary, Master-planned community, following that strategy for many years.  We, in California, also learned over the years that good planning included being good environmental stewards.  This became obvious when we experienced ozone-induced eye irritation and other problems from our smoggy California skies.

In the late 1980s, Irvine led the way by being the first City to ban CFCs (chloro-fluorocarbons formerly used in aerosol sprays, solvents, refrigerants and packing materials) that were destroying the stratospheric ozone layer.  This was an effect discovered by UCI scientists, and ultimately led to a universal ban on these chemicals.  Now, where are we?

A Tale of Two Lawsuits 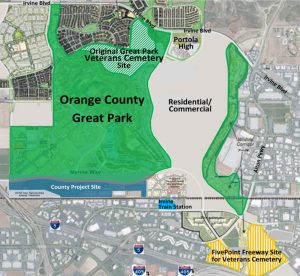 The City’s October 10th zone-change and “land-swap” ordinance is being challenged by Referendum and by a major lawsuit. The ordinance, if allowed to go into effect, would give FivePoint Communities ownership and entitlement to build 812,000 square feet of office and commercial space on the Original Great Park Veterans Cemetery Site (top, along Irvine Blvd.). The Veterans Cemetery would be moved to the FivePoint Freeway Site alongside the I-5/I-405 freeway intersection.

On October 10th, our City Council, on a 3-2 vote (the two dissenting votes were Councilmembers Jeff Lalloway and Lynn Schott) supported transfer of 125 acres of the Great Park (the Original Great Park Veterans Cemetery Site) at its north end to developer FivePoint Communities.  [See map, below.] That transfer of ownership — Councilmember Lynn Schott called it a “giveaway of our great Park” — also included re-zoning the property to enable FivePoint to build 812,000 square feet of office and commercial development, generating nearly 10,000 daily auto and truck trips.  The motivation and purpose for this radical land-use change is clear — a huge windfall profit for developer FivePoint.

However, a major environmental lawsuit has been filed against the City of Irvine, the Irvine City Council and FivePoint to halt the transfer of ownership and FivePoint’s massive office and commercial development at the Great Park in north Irvine, before it gets started.  Mayor Wagner and Councilmembers Shea and Fox are determined to fight the lawsuit.

Yet, ironically, Wagner, Shea and Fox vehemently oppose a similar commercial development on a County-owned 108-acre parcel of land adjacent to the south end of the Great Park.  [See map.]  In fact, they are leading the charge in filing a lawsuit to stop the County, claiming its commercial development plans will produce traffic and air pollution devastating to Irvine’s quality of life.

So, why do Wagner, Shea and Fox turn a blind eye to similar devastation that the FivePoint development at the north end of the Great Park will produce?  The City makes the absurd claim that the massive FivePoint commercial development on the Original Veterans Cemetery Site in the Great Park would have NO impact on traffic and air pollution in the adjacent residential neighborhoods!

A front-page article in the LA Times, Thursday, November 16th, reports the unexpected rise in ozone levels in the past two years after a number of years of decline.  This year, we have had 145 days of bad ozone levels so far, up from a low of 113 days in 2013.  The cause – as one might expect – was a combination of factors, including rising temperatures, increased traffic and pollution-trapping thermal inversions.  This coincides with a noted rise in smog-induced respiratory diseases such as asthma.

One thing is sure:  In Irvine, heat-trapping carbon dioxide, greenhouse gas emissions and other pollutants resulting from overdevelopment and added traffic,
continue unabated.

The City’s October 10th zone-change and “land-swap” ordinance is being challenged by Referendum and by a major lawsuit.  The ordinance, if allowed to go into effect, would give FivePoint Communities ownership and entitlement to build 812,000 square feet of office and commercial space on the Original Great Park Veterans Cemetery Site (top, along Irvine Blvd.).  The Veterans Cemetery would be moved to the FivePoint Freeway Site alongside the I-5/I-405 freeway intersection.