Last year, I reported that Volunteering = Better Health…at any age.

A volunteer I highlighted, Ed McNew, is now 88 years old.  He was, by far, the top signature gatherer for the Veterans Memorial Park & Cemetery Initiative Petition.  He said, at the time, “It gives me purpose, and it’s something I look forward to every day.”  How is Ed doing with the petition campaign over?   Well, Ed is now on the Build the Great Park Veterans Cemetery steering committee that meets via Zoom weekly, and that keeps him occupied. 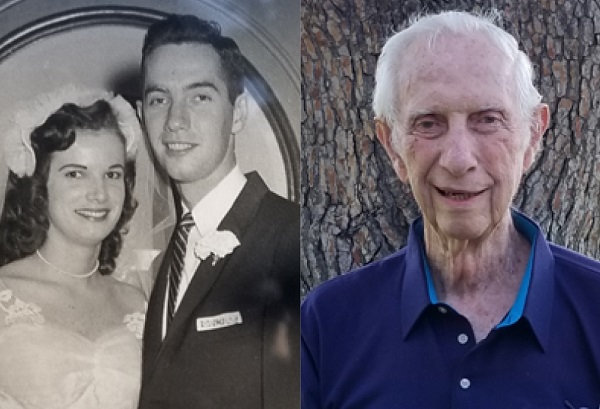 Ed’s Earlier Days
In 1954, Ed graduated with a BA in Economics from Denison University in Granville, Ohio.  As a result, he lost his student deferment from military service.  To avoid the inevitable call from his draft board, he enlisted in the U.S. Army.  After basic training at Fort Knox, Kentucky, he was transferred to a base in Tokyo in January 1955.  Upon arrival, he was assigned a bedding area and had to pick a bunk bed.  That was easy since he saw only one vacant bed — an upper bunk.  The lower bunk was occupied by Alex Toth, who, while becoming one of Ed’s best friends, also became a well-known cartoonist.  (Alex died in 2006.)

Ed was honorably discharged from the Army in 1956.  About a year later, while living in Portsmouth, Ohio and selling steel for metal products, he took a two-week vacation to visit Alex, in California.  After his arrival, Alex’s wife said that she had invited her best friend over.  Soon after, in walks Louise, “the most beautiful girl in the world,” according to Ed.  Yes, it was “love at first sight” for both.  They dated 14 days; romance developed fast; 30 days later Ed and Louise visited Ed’s parents in Detroit; he proposed; she accepted; boom — married.  They were together 60 years!

Ed was so successful with a new sales territory in the South that he was transferred to Memphis.  One humid summer day, Ed walked outside, his sunglasses fogged up, and he blurted out to Louise, “That’s it, we’re going to California!”

Based in Southern California, Ed continued his career in the steel business.  Meanwhile, he stayed in touch with his nine other Delta Upsilon fraternity brothers from the Class of 1954, ad Denison. To memorialize a fraternity brother who died in 2001, a year later, Ed coordinated the establishment of an endowment to award annual scholarships to worthy Denison seniors.  The generosity of the brothers, and Denison’s financial management of their gifts, enabled the fund to grow to about $300,000.  Two members of the Denison Endowment Department with whom Ed maintained a long-term relationship were particularly helpful.  The fund generates $15,000 yearly for student awards.  Only two of those ten founding fraternity brothers are still alive — Ed, and Jim Carpenter, who lives near Denison. 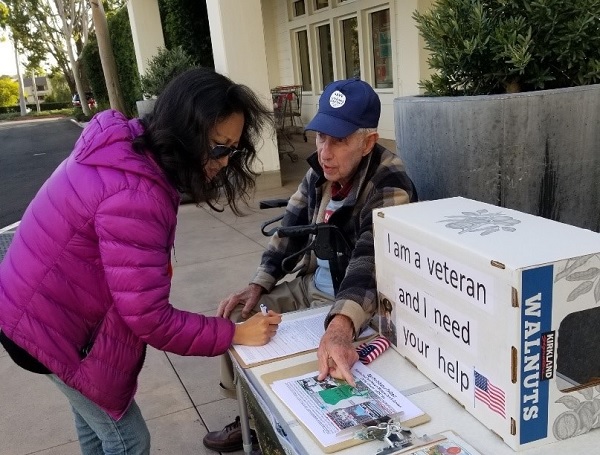 How Ed Got Involved
I asked Ed how he first got involved in the Irvine campaign to build the Veterans Memorial Park & Cemetery.  He said it began with Measure B, in 2018, when he donated and put up some signs.  Soon after, he got an invitation to come to an event at a pizza restaurant to thank the volunteers and donors.  Ed’s daughter, Linda Linden, who lives nearby, drove him there to enjoy great pizza.  Ed Pope, Chair of the Build the Great Park Veterans Cemetery committee chatted, then introduced Ed (McNew) to Larry Agran.  The two immediately hit it off and have been working together ever since.

Last year, Ed received an email asking if he would be willing to test his skills at getting people to sign an Initiative Petition.  The Initiative would rezone the ARDA site at the Great Park exclusively for a State Veterans Memorial Park & Cemetery.  Ed agreed, and began collecting signatures on November 1, 2019.  He amazed himself as well as everyone else when he got 30 signatures in 2 hours.  He used his walker as a chair, sitting outside a grocery store or bank (before COVID-19) and greatly enjoyed interacting with everyone who came by to see what this octogenarian with a pro-veterans cap was doing.  Ed was hooked and said he could do that every day.

Initially assigned to a location every other day for two hours (the volunteer scheduler thought an octogenarian could not do more), Ed soon insisted that he have longer assignments, and every day.  Pretty soon, he was out there 7 days a week, 6 to 7 hours every day, from November 1st to early March, and collected nearly 4,000 signatures out of the total of 19,790 gathered!  Amazingly, other than the holidays, he only took one day off.  Ed reflected, “I still can’t believe I did that.”

What makes it all the more remarkable is that Ed did all this with injured vertebrae from a fall he took two years ago that made it hard for him to move around.  But that did not slow down his signature gathering.  Relying on his daughter and others, he was able to get to his assigned location, get set up, collect signatures, and then get a ride back home, each and every day.

What did Ed do before he got involved in the campaign to build the Veterans Cemetery?  He quickly answered that, saying, “Before, I was reading books, taking walks, watching TV.  I didn’t belong to anything.  I was a member of nothing.  I stayed home and worked on my genealogy.”  Ed’s wife, Louise, died in 2017 and his multi-handicapped son died in an accident in 2018.

Ed’s Advice
I asked Ed how many close friends he has left?  He replied that in addition to Jim, he remains in phone contact with the wife of another fraternity brother, and with Stan Rutledge, an old work friend from Vancouver, Canada.  That’s it.  However, his volunteerism has brought him lots of new friends!

Exercise
Ed told me he is doing more exercise now — including pushups — after encouragement from this writer.  He began with his knees on the floor, and can now move them further back, straightening his legs a bit more.  He said, “It’s working.  I’m getting stronger and I won’t be satisfied with where I am.  I’ll want to do more.”