The approved PHS site is located off the end of a pair of runways, a notorious location for the dumping of all sorts of toxic fluids by military personnel during the war years of the 1940s and 1950s. After huge quantities of soil contaminated with volatile organic compounds (VOCs) were discovered and removed in 2013 and 2014, no one even considered the possibility that the entire site might have been contaminated by the military.

In 2015, a letter to Governor Brown included a petition with 1,400 signatures that ICNV had collected up to that time asking for “independent, comprehensive testing for toxic contamination [to] be conducted.”  After months of back-and-forth communication, the California Department of Toxic Substances Control (DTSC) Director issued a set of orders to IUSD in March, 2016,  overturning the prior approval by the DTSC. Ultimately, bending to the demands of Irvine residents, DTSC officials were compelled to order the sinking of 17 soil-gas test wells, 16 of which turned up a wide range of “low” levels of toxic and carcinogenic (cancer-causing) VOCs! However, rather than provoking further testing to find higher concentrations on the site, they ended the testing  with the unfounded theory that the contamination was caused by recycled irrigation water.

This process is disturbingly similar to the Flint, MI, disaster, where the public agencies continued to deny there was a problem, even after finding what they deemed to be “low” levels of lead in the water of the selected homes they tested. Rather than test further, they stopped. Only when the public stepped in was the catastrophic problem finally recognized for what it was.

It is now up to the residents of Irvine, once again, to come to the rescue. Mindful of the success of our previous Safe-Schools Petition, Irvine Community News & Views is launching a new petition. Please sign it and enlist your Irvine friends and neighbors to sign as well.

We, the undersigned, call upon the Irvine School Board and the Irvine City Council to conduct comprehensive, independent and conscientious testing of the Portola High School site — both site-wide soil-gas testing and continuous air monitoring inside the buildings — for toxic Volatile Organic Compounds (VOCs, such as benzene, benzene derivatives, and toluene) that have already been found in previous, limited tests on the 40-acre site.

This renewed and expanded testing, along with aggressive remediation efforts, can help ensure that the Portola High School site is — and always will be — a safe site for teachers, staff, students, and the entire Irvine community. 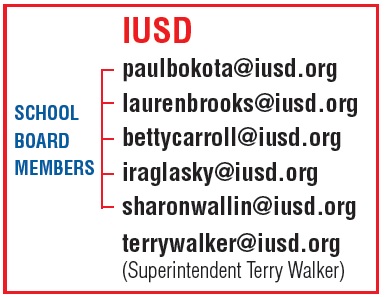