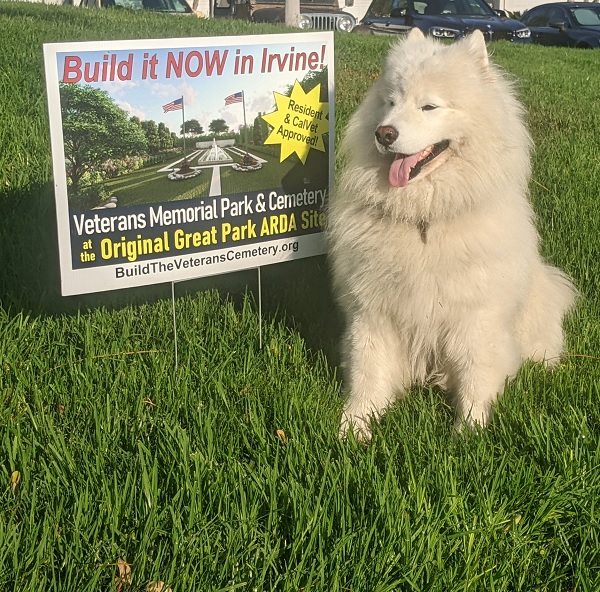 Over the past few years, there has been a concerted effort by giant land developers and their political allies on the Irvine City Council to spread the lie that Irvine residents have no interest in a Veterans Memorial Park & Cemetery on the former El Toro Marine Corps Air Station (“ARDA” site) at the Great Park.

Here’s the truth. Irvine residents have repeatedly supported the project. In fact, there have been two citizen-led ballot measures regarding the ARDA site. In both cases, nearly 20,000 Irvine resident signatures were gathered to successfully qualify the measures for the ballot. And, Irvine voters overwhelmingly defeated the previous Council’s scheme to move the long-promised Veterans Memorial Park & Cemetery away from the ARDA site — 63% of Irvine voters said NO!

If Mayor Khan and Vice Mayor Kuo (who both joined the Council in 2018) would have simply implemented the will of the voters after the 2018 election, the first phase of the project would have already been completed.

Instead, here we are four long years later with Mayor Khan and Vice Mayor Kuo —  now running together for re-election — doing everything in their power to disrespect Irvine veterans (and Irvine voters) by erasing all vestiges of our City’s rich military history.

Roughly 100 acres of the voter-approved Veterans Memorial Park & Cemetery on the 125-acre ARDA site would include a vast forest of trees, trails, and memorial gardens for our local community to enjoy.

I just don’t understand why Mayor Khan and Vice Mayor Kuo have no interest in preserving a very small portion of the former military base in the Great Park (less than 10% of the park) with a lasting memorial that honors the service and sacrifice of the brave men and women who have served our great nation.

Hundreds of my fellow Irvine residents have joined me in planting a Build It NOW! sign in our front yards to remind our neighbors to only vote for those candidates who truly support veterans and our families.