Veterans Corner: An Update on the State Veterans Cemetery 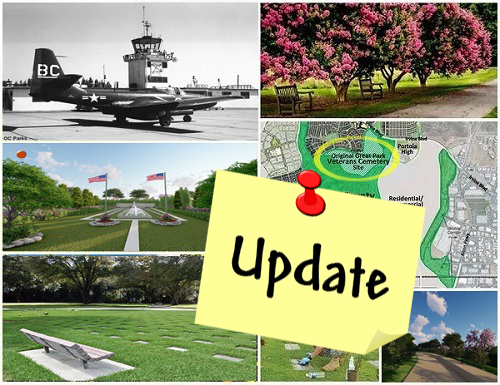 Since launching this column in February, I’ve received numerous inquiries regarding the status of the State Veterans Cemetery at the “ARDA” site on the former El Toro Marine Corps Air Station in the Great Park. This article will update readers on the latest out of Sacramento … and here in Irvine.

The Latest from Sacramento
On December 7, 2020, State Senator Tom Umberg and Assemblymember Tom Daly, both veterans, introduced SB 43, which is legislation to build and maintain a State Veterans Cemetery on the ARDA site. Last year, the bill received unanimous support from the Senate Military and Veterans Affairs Committee and the entire State Senate itself.

After the Irvine City Council voted (4 to 1, Councilman Larry Agran voting NO) to kick the long-promised Veterans Cemetery out of Irvine, the bill was amended to include a study of the latest alternative site — the “Gypsum Canyon” site — which is 26 miles from the ARDA site (by freeway), near the Riverside County border, alongside the congested and noisy 91 freeway. Click here to watch my video from the Gypsum Canyon site.

I support the new study because I believe it will prove, once and for all, that the Gypsum Canyon site is not suitable for a State Veterans Cemetery. We can then have the State move forward at the ARDA site. (The amended bill is now on its way to the Assembly Military and Veterans Affairs Committee where it awaits a scheduled hearing and vote.)

In the meantime, proponents of the fatally-flawed Gypsum Canyon site have introduced a competing bill, AB 1595, that allows endless studies of any suggested sites in Orange County. If AB 1595 passes, once the State determines that the Gypsum Canyon site is unworkable, opponents of the ARDA site will be able to just keep coming up with alternative sites to study — as they have done three previous times.

To make matters worse, AB 1595 directs payment for every site study to be paid for by Cal Vet’s Cemetery Fund, which slowly eats away all the money that’s been allocated for construction of the Veterans Cemetery. My fear is that this “Endless Study Bill” will divert construction funding to a point that there won’t be enough money left in the fund to actually build a State Veterans Cemetery on the ARDA site … or anywhere in Orange County.

Let me tell you why I know the Gypsum Canyon site will never be allowed to become a Veterans Cemetery. I worked as a land planner for the County of Orange for 30 years. After reviewing the site, I am sure that the land-use, geotechnical and seismic issues that exist on the Gypsum Canyon site can never be resolved. The other reason is that Gypsum Canyon is only 2 miles from the Riverside County border. Riverside County is home to one of the nation’s largest veterans cemeteries at 1,250 acres.

Both State and Federal officials would be very concerned if two veterans cemeteries were in such close proximity to one another. In contrast, Irvine’s ARDA site and the Riverside National Cemetery are 58 miles apart (by freeway), which is far enough to avoid any issues. Why any Orange County veteran would support the Gypsum Canyon site is beyond me.

The only viable site remaining in Orange County is the ARDA site. It has already been studied and conceptually designed by CalVet, it’s zoned EXCLUSIVELY as a Veterans Memorial Park & Cemetery, and it has overwhelming support of the residents of Irvine and the thousands of veterans across Orange County who have reached out to me.

The Latest from the City of Irvine
All of this back-and-forth with the State Legislature would not be happening if Mayor Farrah Khan and Councilmembers Anthony Kuo, Tammy Kim, and Mike Carroll would simply implement the will of the people and begin the process of negotiating with the State for transfer of the ARDA site for the State Veterans Memorial Park & Cemetery.

Councilman Larry Agran is the only member of the Irvine City Council who has consistently fought for us.

Over the past few years, tens of thousands of Irvine residents have signed two petitions and gone to the polls to support the ARDA site. (91% of the voting precincts in Irvine supported the ARDA site.)  Four members of the Irvine City Council are ignoring our voices and our votes. That’s just not right … and it’s undemocratic!

The City Council has directed staff to provide cost estimates and feasibility studies for site-clearing and demolition of the ARDA site. That’s good news, but instead of honoring our veterans, they want to install a huge “botanical garden.” They seem to be forgetting that City Ordinance No. 20-05 — the law that was established when the City Council adopted our citizens’ initiative on May 12, 2020 — dictates that the only thing that can be built on the ARDA site is a Veterans Memorial Park & Cemetery. This Council majority is clearly not listening to the residents who voted and signed petitions to make this happen.

Our citizens’ initiative is the law of the City of Irvine, and our committee, as well as the Build the Veterans Memorial Park and Cemetery committee, intend to defend it and enforce it, if necessary.

I’d like to close by sharing just a few of the thousands of comments I have received from our fellow veterans and family members regarding the ARDA site. If you have a comment you would like to share, please email me at frank@veteransfortheardasitecemetery.org.

As a Marine who was stationed at MCAS El Toro, I believe it is fitting that Orange County has a Veterans Cemetery at this site.
– Gerald Carter (USMC 1979-1985)

My father was honorably laid to rest at Miramar … He was 100% in favor of the Irvine Veterans Cemetery location … I would like to go on record, on his behalf, for his support of this location.
– Victoria Paoletti-Tejeda (daughter of John Paoletti, USAF 1943-1967)

I was stationed at El Toro MCAS and want to be buried there when the time comes.
– Jerry Couchman (USMC 1964-1970)