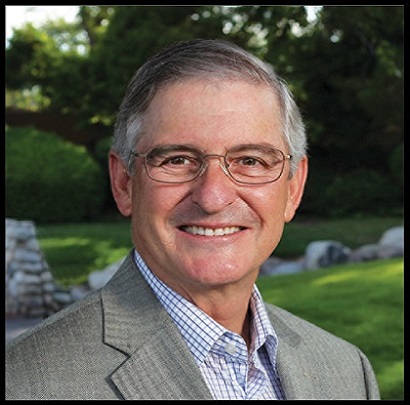 Last time, I used this space — this CityWatch page — to lay out the priority issues that bear “watching” in 2017.  I listed my No. 1 priority as keeping an eye on Growth, Development, and Traffic.  Sure enough, just days after my article first appeared, the Irvine Planning Commission was giving rubber-stamp approval to developers to build hundreds of new houses and condominiums — actually, about 1,100 units were approved in February for Irvine’s northern-most villages of Orchard Hills and Portola Springs.

That means a lot more houses and condominiums, with especially serious traffic consequences in the northern parts of Irvine, where overdevelopment is already eroding the quality of life for many residents.  Sadly, the Planning Commissioners (and the City Council) seem so intent on giving the developers everything they want, that they don’t even suggest stronger mitigation measures, such as imposing a slower rate of growth with phased implementation, and the initiation of citywide transit requirements.

Take a look at the GrowthWatch and TrafficWatch feature on this page.  It’s as easy as 1-2-3-4 to understand what is happening to us in terms of growth, development, traffic and our quality of life.  Now the question is this:  Are Irvine residents prepared to actually DO something about it — like demand more accountability from the Planning Commission, Mayor and City Council?

Another priority for CityWatch 2017 is what I call TrumpWatch.  And, sure enough, President Trump’s first weeks in office produced a whirlwind of activity, including a number of immigration and deportation orders, most notably a Muslim travel ban.  These orders have created tremendous fear and disruption for many hundreds of Irvine businesses and families.  So far, the Mayor and City Council have remained silent.

Actually, I agree with the 2-to-1 majority of Irvine residents who took the February Irvine Community Poll and said “YES,” Irvine’s local elected officials should say something and do something when federal policies — in this case, Presidential executive orders — violate the rights of Irvine residents or workers, or otherwise harm our community.  (Click here to read about the community’s reaction.)

The truth is, individual citizens and local elected officials can make a difference. In the 1980s, when I was Mayor, federal immigration enforcement officers began chasing after Irvine farmworkers, determined to round-up, arrest and deport as many as possible, even though most of the workers were U.S. citizens or documented, legal residents.  As Mayor, I wrote a very public letter to William French Smith, then the Attorney General for President Reagan, objecting to the “field sweeps” and the unconstitutional, warrantless search and seizure of Irvine farmworkers.  Soon after, the practice stopped.  I like to think my letter helped.

In another instance, I was Mayor when the 9/11 terrorist attacks took place.  Not long after, immigration officials began rounding-up and detaining many hundreds of immigrants in Southern California, dozens of them in Irvine.  Almost all of these people were from Iran, Iraq, or other Mideast countries.  And, of course, most or all of them had done nothing wrong.  While I wrote letters to then-Attorney General John Ashcroft, I got no response.  But I think my letters, and some phone calls, may have helped get a number of lawful immigrants released sooner rather than later, so they could return to their families. 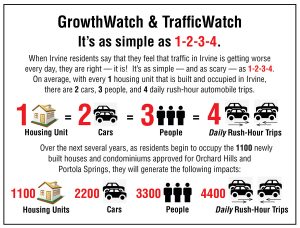 Uncontrolled growth and development is making Irvine’s traffic emergency worse each and every day.  And things will be getting a lot worse because of what the Irvine Planning Commission did in February.  Planning Commissioners gave rubber-stamp approval to 1100 new houses and condominiums that will soon be built in the City’s northern and eastern villages, Orchard Hills and Portola Springs.  Sadly, the Planning Commission failed to require or even recommend new growth-control measures to slow the developments and reduce their traffic-inducing impacts.

Just look at our GrowthWatch and TrafficWatch chart, which monitors the surge in traffic congestion, according to a 1-2-3-4 formula.

This 1-2-3-4 formula means that as they are built and occupied over the next few years, the 1100 single-family and condominium units approved for Orchard Hills and Portola Springs will bring 2200 additional cars, 3300 additional people, and 4400 additional daily rush-hour automobile trips in Irvine.