On March 17th, volunteers officially transmitted — to the Irvine City Clerk, and then to the Orange County Registrar of Voters — 12 boxes of initiative petitions bearing a record-breaking 19,790 Irvine resident signatures.

But, why is a ballot initiative even necessary?

During the November and December holiday season (when they thought that nobody was paying attention) the Irvine City Council’s two unelected members — Mayor Christina Shea and Councilman Michael Carroll — pushed ahead with yet one more corrupt land-use scheme.  The two set out to derail and defeat the long-planned Veterans Memorial Park & Cemetery at the Great Park “ARDA” site, and hand control of the valuable City-owned property to a billion-dollar commercial developer.

At the November 26, 2019 City Council meeting, two days before Thanksgiving, Shea and Carroll put forward their scheme to rezone the City-owned, 125-acre ARDA site at the Great Park.  Their zoning ordinance replaced the long-planned, pastoral Veterans Memorial Park & Cemetery with zoning for massive office, commercial and industrial development intended to net hundreds of millions of dollars for their favorite developer, FivePoint.

Armed with the power of initiative, Irvine citizens refused to accept this kind of local greed and corruption.  That’s why we drew up our own zoning ordinance and have gathered enough initiative petition signatures to qualify our own plan for Irvine voters to approve in November.

I am the author and official proponent of the “Build the Great Park Veterans Cemetery” initiative — the people’s zoning ordinance to once-and-for-all require that the 125-acre ARDA site be used solely and exclusively for a State-built and State-operated Veterans Memorial Park & Cemetery.  If passed by Irvine voters later this year, our initiative would override the Shea-Carroll-FivePoint zoning and any other schemes intended to defeat the Veterans Cemetery project.

So, let’s continue to work together on this important goal.  Let’s urge every Irvine voter to support the initiative.  A YES vote will not only override the Shea-Carroll-FivePoint rezoning scheme; it means that we can begin demolition and site cleanup this year — as the first step in a 30-month construction schedule for the beautiful State-built and State-operated Veterans Memorial Park & Cemetery. YES, let’s do it! 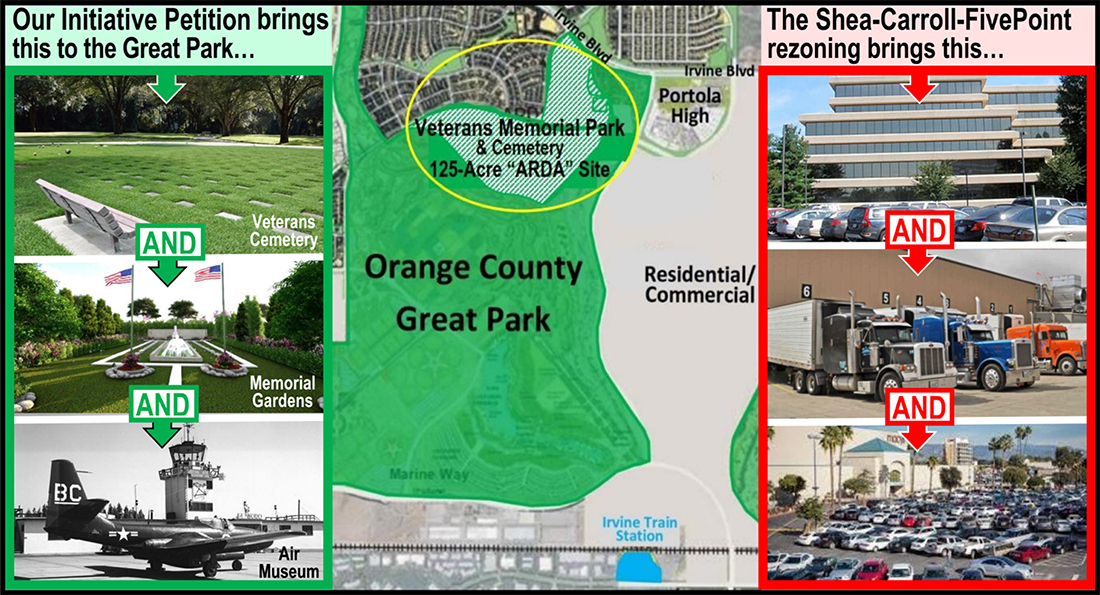