Last month’s front-page story — “Trump Agenda Threatens to Hurt Thousands In Irvine” — focused on the specific effects that President Trump’s proposed federal policies would have on Irvine residents.  The article itself and the accompanying Irvine Community Poll elicited a strong response among our readers.

Here (below) is the Irvine Community Poll question we posed; the results of the poll; and a representative sampling of the letters and comments we’ve received.

You can still take our Poll at: IrvineCommunityNews.org/Take-Our-Poll 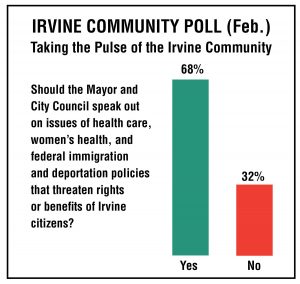 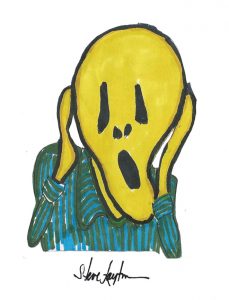 I’ve had 37 safe years in this wonderful country.  America hated South Africa when my family came here.  Initially visitors, we later converted to  Green Card status and finally we became American citizens. We have contributed intellectually, socially, and perhaps in this dark time, morally to American society.

I was so shaken by President Trump’s immigration order, that my husband and I went with flowers to the local Mosque on Saturday night to voice our solidarity and outrage at what is happening.  We attended a synagogue meeting about the hatred that is flooding social media, aimed at the Muslim and Jewish communities.

President Trump has given permission for the “dark side” of America to speak out. Anyone who is “different” can be cast in the role of “enemy.” That “playbook” is historically familiar and horrifying.

This amazing country is a Democracy. This IS the wonder of America — we can speak out against hate crimes, laws we disagree with, and discrimination.  We have Freedom of Speech. We must exercise that freedom.  As my Representative in Congress, I expect you to be my voice for a humane and just America.

Letters to the editor are welcome.  Please include your name and ZIP code.  Letters for publication must be addressed to Editor, 4199 Campus Drive, Suite 550, Irvine, CA 92612 or email Editor@IrvineCommunityNews.org.

Letters may be edited for publication.  Unpublished letters will not be acknowledged or returned.