No, it’s not your imagination.  Traffic in Irvine is, in fact, getting worse by the day — and, of course, it’s worse still with each month that passes.   You can see it.  You can feel it. Because it’s real.

The cause is obvious: Irvine is experiencing a rate of residential development that is wildly out of control, and the City continues to be governed by a Mayor and City Councilmembers who refuse to exercise any control at all in matters of growth and development.  With the City  Council’s  approval,  each  month  about 300 to 400 new houses and apartment units are being built and occupied.  So, with every month that passes, that amounts to 300 additional housing units, 600 additional cars, 900  additional  people,  and  at  least  1,200 additional daily rush-hour trips.

Our infrastructure — our roads and traffic control   systems   —   are   simply   breaking down.  What’s happening is exactly what City Environmental Impact Reports described 5 years ago:  Dozens of Irvine’s roads and intersections were going to become increasingly dysfunctional and, in time, gridlocked. And, yet, from 2012 to 2016, the Mayor and City Council kept saying YES to all the big developers, most notably FivePoint Communities, whenever they asked for more entitlement for yet thousands more housing units.

Then, sure enough, led by Irvine mega- developer FivePoint Communities, an astounding $1.5 million was raised and spent to elect Don Wagner as Mayor and re-elect and re-elect Christina Shea to City Council in the recent 2016 election. Wagner and Shea now will almost certainly be enthusiastic cheerleaders for FivePoint and other big developers.

The shame of it all is that 2016 mayoral candidate Mary Ann Gaido, a former two-term Irvine City Councilmember and longtime Planning Commissioner, had it right all along. Her mantra, dating back years, was this: Traffic Control Begins with Growth Control.

Gaido called for a “time-out” from overdevelopment — a moratorium. Unless approved by the voters, she was opposed to any more General Plan Amendments authorizing thousands of houses and apartments at a time. She also wanted to put the brakes on the issuance of residential building permits.

The voters wanted these things, too — that is, until they fell victim to hundreds of thousands of dollars in TV and direct-mail attack ads against Gaido. The developer-funded campaign of lies, smears, and character assassination worked. Gaido lost by a few percentage points.

Lost, too, was the chance to cap Irvine’s population below 300,000 people. As Gaido pointed out in the campaign, for decades the Irvine General Plan called for a maximum City population of about 250,000. As we began to approach the cap five or six years ago, Gaido sounded the alarm. But the Mayor and City Council just kept going, granting more and more residential entitlement. Today, Irvine’s population stands at nearly 275,000. And, with the pro-developer “come-and-get-it” policies promoted by Wagner and Shea, Irvine’s population is likely to zoom to 300,000 by 2020, and reach 330,000 just a few years after that. That’s overdevelopment, pure and simple.

In an attempt to pacify voters regarding Irvine’s worsening traffic nightmare, Wagner and Shea say they want to re-create the City Transportation Commission and appoint some kind of “Traffic Czar” to figure things out. No one with an ounce of sense believes these tepid measures will do much of anything to improve the situation.

What’s needed, instead, is a restored commitment to good planning. And that requires a Mayor and City Councilmembers with the wisdom and courage to say NO to developers and YES to the kinds of strong growth-control policies that served our City so well for 40 years, only to be ignored for the last 5 years. 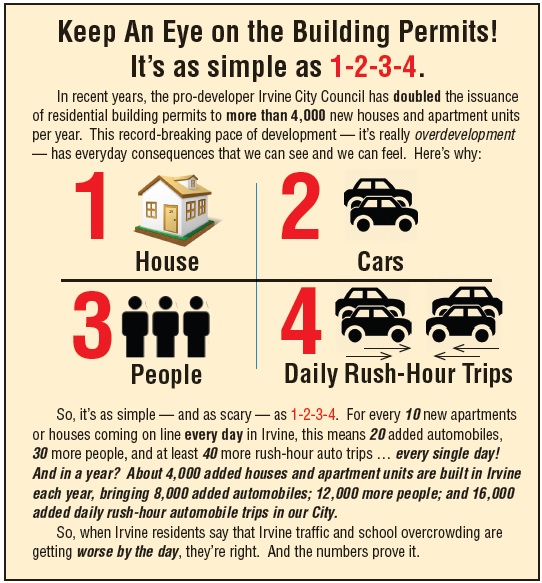