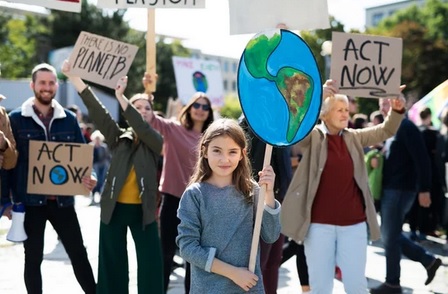 Humans have demonstrated seemingly unlimited capacity for innovation. We’ve mastered flight, mapped our own genome and invented the telescope and internet. So why are we so inept at tackling the climate crisis, the greatest existential threat we’ve ever faced?

It’s not because we’ve lost the knack for innovation, nor is it because we don’t know what needs to be done: Stop dumping carbon dioxide and other heat-trapping greenhouse gases into the atmosphere.

So, what’s at the root of humanity’s incompetence when it comes to the climate crisis?

The “slow boil” hypothesis — that climate change is such a slowly evolving threat that humans behave like the frog thrown into a pot of water heated up so gradually the frog doesn’t notice it’s being cooked alive — is no longer credible. Essentially every region of the world is experiencing increasingly frequent, record-shattering climate extremes like wildfires, droughts, tornadoes, floods, melting glaciers and sea level rise. Orange County is no exception.

In July 2020, Balboa Islanders had to contend with parking lots, streets and homes flooded with up to three feet of ocean water when a high tide combined with big surf.

Such threats to seaside homes and businesses will multiply as the encroaching ocean is literally narrowing California beaches.

As is true of every coastal community, the threat to commercial and recreational fishing in Orange County will increase as more and more atmospheric carbon dioxide dissolves in the ocean, making the water more acidic and lowering its calcium content. Corals, clams, snails and other invertebrates require calcium to build their hard shells and skeletons and to survive. This has ripple effects all the way up the ocean’s food chain.

Though Orange County’s drought rating is currently “moderate,” the drought status in most regions of California remains severe. Seventeen of the 20 worst wildfires in the state’s history happened since 2000, three in 2021. The Canyon Fire 2, Blue Ridge, Silverado and Bond fires are recent painful reminders of Orange County’s particular vulnerability which is expected to worsen as climate change makes water less available.

The fundamental reasons for our collective failure to tackle the climate crisis are two-fold: unbridled corporate capitalism and the failure of governments to act in the public’s interest.

Corporate profiteering established economies here and abroad based on the wanton burning of fossil fuels, and it continues to steer the world to ignore the climate crisis in favor of short-term corporate profits. When coupled with a corrupt political system where politicians are beholden to the corporate donors who get them elected, the welfare of the public is relegated to a back seat.

The Netflix bombshell Don’t Look Up captures this formula for inaction on the climate through the satirical allegory of a planet-killing comet headed straight for earth. Despite abundant scientific evidence that the only way humanity will survive is to blow up the comet, our government caves to the whim of a profiteering corporate CEO with a cockamamie scheme to mine the comet for rare-earth elements. If you haven’t seen the movie, I won’t spoil the ending for you.

David Sirota is an American journalist and screenwriter who contributed to Don’t Look Up. In a January 7th interview, he clarified what the movie is fundamentally about, “how elites and institutions do not operate in the public’s interest.” Politicians and the media characteristically fail to address how a bill will affect the livable ecosystem on which human life depends, opining instead on how the economy could be affected.

This thinking puts humans and our planet’s life support systems in service of the economy. Instead, the economy should be conceived as a tool for ensuring a livable planet.

We are witnessing this same reversal of priorities in Congress’s deadlock in passing President Biden’s Build Back Better agenda which claims to offer a roadmap for reaching net-zero carbon emissions by mid-century. The arguments against are about the cost in dollars, ignoring the cost in human suffering and the devastation to the planet of the federal government failing to act.

That in December Congress passed a $768 billion defense bill despite the end of the war in Afghanistan should upend any suggestion that the bucks aren’t there to protect the public from the very real threats of global warming. Meanwhile, the fossil fuel industry continues to be subsidized by our tax dollars as carbon dioxide spews into the atmosphere with no accountability for the environmental carnage being done.

Orange County experienced its own rude reminder last October of the damage fossil fuels can wreak on the environment. A ruptured undersea pipeline fouled the water and shoreline at Huntington Beach with roughly 25,000 gallons of crude. Beach access was shut off for a week, and a 20 mile stretch of coastline was closed to commercial and recreational fishing for over two months. The December indictment of three oil companies for failing to intervene in response to repeated leak alarms raises hope for some degree accountability.

There is also reason to hope that accountability is on the minds of increasingly more members of Congress. Bipartisan legislation directed at producers or importers of fossil fuels, which imposes a fee on the carbon content of the fuels, was reintroduced in the House last April with 93 cosponsors, including three from Orange County: Katie Porter (45th District), Lou Correa (46th District), Mike Levin (49th District).

The fee would start at $15 per ton of carbon dioxide emissions and rise yearly to maintain pressure on the energy sector to transition to non-polluting energy sources. Collected fees would be returned to the public in the form of dividends.

It also stirs some hope that more climate-conscious pockets of the nation will forge ahead on strategies to slow global warming. On Jan. 1, California became the first state to mandate separation of food waste from general household trash to reduce methane gas emissions by landfills.

In the spirit of the environmental maxim “think globally but act locally,” I’m excited to receive my new green food/yard waste bin and do my small part. Unfortunately, this maxim rings hollow juxtaposed to the magnitude of climate actions needed to preserve a livable world for future generations.