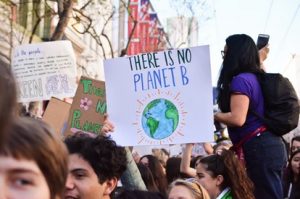 The next U.S. presidential election is being transformed because children everywhere, watching in disbelief as grownups fail to address the climate crisis, are launching their own climate movements.

In contrast to the 2016 election – where exactly zero questions about global warming were posed during the general election debates – the lineup of presidential candidates is already being pressured to do something about the climate threat, and it’s our kids who are doing the pressuring.

The Sunrise Movement is a student-led political organization which sprang up prior to the mid-term elections to advocate for transitioning to renewable energy.  Half of the 20 candidates Sunrise supported for refusing to accept fossil fuel money won election.

Another student-led movement was ignited last August when Greta Thunberg, a Swedish teenager, walked out of school on a Friday to stand outside the Swedish parliament building in protest of her government’s inaction on climate change. Her personal activism has sparked a world-wide protest known as Fridays for Future (FFF) where students in over 2,200 cities across 128 countries join Greta in staging walkouts every Friday with the same message: The threat to their future posed by climate change is exponentially more important than whatever they’re missing in class.

FFF strikers are asking questions like “Why study for a future, which may not be there?”

Greta is a climate hero to the younger generation, and many in the older generations are listening too.  She’s recently given a TED talk, addressed, the recent United Nations climate talks in Poland, and delivered a speech to the World Economic Forum where her six-minute statement to the grownups in power went viral.  Listen to this teenager’s voice:  “The main solution is so simple even a small child can understand it.  We have to stop the emissions of greenhouse gases….I don’t want you to be hopeful, I want you to panic….I want you to act as if the house is on fire, because it is.”

FFF mobilized a worldwide Strike For Climate on Friday, March 15 in which hundreds of thousands of young people in nearly 2,000 cities in over 100 nations participated.  Youths gathered at several locations here in San Diego, Orange and Los Angeles Counties.

In a poignant letter addressed to global leaders, FFF activists stated their commitment to continue striking until those in power take responsibility for fixing the climate crisis.

On the day before the March 15 strike, Greta was nominated for the Nobel Peace Prize for her climate activism. Her determination is inspiring other children to express their outrage in creative ways. For example, nine-year-old Zayne Cowie wrote a children’s book for grownups titled “Goodbye Earth” in which he chastises adults for dumping on younger generations a crisis they did nothing to create.

Climatepedia is still another student organization created by UCLA students. This non-profit organization is run by students and alumni from universities across the country.  Those students, though coming from diverse backgrounds, believe that climate change is one of the most important issues of our generation.  Their mission statement is: “To elevate voices on the risks and solutions of Earth’s changing climate.”

Gianna Lum, the UCI chapter’s Operations Director, is heading to Columbia University, in New York City, for her master’s degree.  There, she will grow Climatepedia’s online climate education program and launch the Columbia chapter.  The UCI chapter’s founder is Kimberly Duong, a current Ph.D. candidate in civil engineering.

What grownups should do

Whether we grownups will move beyond the shame we should feel for making such a mess of things to take on the task at hand remains to be seen. A good start entails acknowledging that the party is over when it comes to the wanton burning of fossil fuels.  It’s akin to the sober day after a frat-house party where there’s no getting around cleaning up the beer bottles, puke and crushed Cheetos if you want a decent place to live.

The enthusiasm for the Green New Deal among more progressive members of Congress, including several new young firebrands like Alexandria Ocasio-Cortez (D-NY), offers hope that those in power might find the will to act before it’s too late.

Two recently introduced House bills also take direct aim at the climate. The Energy Innovation and Carbon Dividend Act (H.R.763) drives down greenhouse gas emissions by putting a rising price on carbon emissions.  The Climate Solutions Act requires all electricity in the nation to come from renewable sources by 2035.

Despite these hopeful signs, the intransigence in Congress still looms large.  To overcome it will require non-stop pressure from people of all ages.

We adults who’ve awakened to the climate crisis should feel humble before the youth activists who really have become the grownups in the room when it comes to taking responsible action.  I’m reminded of the Biblical passage…“out of the mouth of babes.”