In June and November, residents within the 45th Congressional District will be deciding whether to entrust Mimi Walters with a third term in the House of Representatives.

Walters is facing a tough reelection battle, so in a race where every vote counts, it’s important that voters take a serious look at her performance record before casting their ballots.

Because the projected impacts of unchecked global warming are so dire, climate change has become the foremost environmental challenge facing humanity.

Worsening storms, droughts and wildfires, catastrophic sea level rise, mass species extinction, disrupted food supplies and political and social unrest result from our failure to rapidly transition from a fossil fuel economy to one based on renewable energy sources.

The Yale Program on Climate Change Communication tracks public opinion on climate change by Congressional District. It turns out that the residents of California’s 45th CD, which includes all of Irvine, hold opinions on climate change that are in step with the nation as a whole: 71 percent in the 45th CD believe climate change is happening; 74 percent want carbon dioxide regulated as a pollutant; and 72 percent believe future generations will be harmed.

How do these views compare with Rep. Mimi Walters’s voting record? In 2015, Walters voted in favor of repealing the rule establishing limits on carbon dioxide emissions from power plants, as set by the federal Clean Power Plan. Her out-of-step opinion of the Plan is still posted on her website: “Forcing a shift away from traditional energy resources would ultimately stifle the economy for years to come and harm consumers’ pocketbooks.”

Walters also co-sponsored the Stopping EPA Overreach Act of 2017, signed by President Trump; it declares that current law does not authorize or require the regulation of global warming. The highly respected League of Conservation Voters, produces a yearly “scorecard” for every member of Congress based on their voting record on important environmental legislation. Mimi Walters’s lifetime score is an abysmal four percent.

For 2017, she scored just three percent, reflecting a single vote favoring environmental protection out of 35 House bills addressing environmental issues. Separate from her deplorable voting record, Walters did one good deed; she recently joined 34 other House Republicans (and 35 Democrats) in the bipartisan Climate Solutions Caucus, which explores policy solutions to climate change. 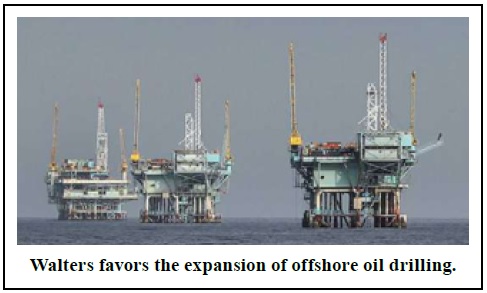 A perusal of her website is anything but encouraging. None of the subheadings in the Priorities tab address global warming or even environmental protection. Inputting “climate change,” “global warming” or “renewable energy” into the search function yields exactly zero hits. Rather, under the subheading Creating Energy Independence, the stress is on expanding exploration of energy sources (presumably fossil fuels) through reduced government regulations.

What is particularly alarming to coastal California residents, is that Walters signed a letter last August to Interior Secretary Ryan Zinke in support of reopening drilling off our shores.

It’s also disappointing that Walters has come out squarely opposed to a 25 cent proposed hike in the federal gasoline tax. Even President Donald Trump has openly endorsed a gas tax hike. The gas tax is the primary source of revenue for the federal Highway Trust Fund, which pays for needed improvements to the country’s highway infrastructure and mass transit. These improvements would significantly reduce fuel consumption and traffic congestion. The federal gas tax has not been raised since 1993, despite inflation, leaving the Fund teetering on insolvency. Yet, Walters recently spent tens of thousands of taxpayer dollars to mail out shiny fliers imploring constituents to return postcards stating their opposition to any gas tax increase.

As responsible citizens, we must hold Rep. Mimi Walters accountable for her position on climate change. If Walters is not supporting aggressive steps to transition away from fossil fuels, she is either unaware of the views of the overwhelming majority of her constituents, or she simply doesn’t care. Either way, her record is unacceptable.