Sometimes, when people get so fed up with elected officials who are obviously serving the interests of big developers, the voters finally rise up and take action.  That’s what the history-making Veterans Cemetery Referendum Petition is all about.

Yes, of course, the Referendum campaign is about Saving the Veterans Cemetery in the Great Park.  But, it’s also about creating the opportunity for Irvine voters to say NO to developer FivePoint Communities and three City Councilmembers — Mayor Don Wagner, and Councilmembers Christina Shea and Melissa Fox.  It’s plain for all to see that Wagner, Shea and Fox are more interested in serving FivePoint, their political benefactor, than in serving the Irvine community.

Well, the voters are just sick of it.  So, congratulations to Ed Pope and his Save the Veterans Cemetery committee for gathering a record-breaking 19,125 signatures . . . and in just 28 days!  As owner and publisher of ICNV, I’m proud that our paper participated in the Referendum effort.  The way I look at it, a real community newspaper should stand up for the community, especially when the Mayor and City Council are failing to do so.

We will continue to report on the progress of the Referendum, beginning with our new feature on this page, FAQs (Frequently Asked Questions) about the Referendum.

On a very disturbing note, “blockers” showed up on the Irvine scene — led by Councilmember Melissa Fox.  They were intent on disrupting and interfering with the Referendum Petition process.  (See Angelo Vassos’s article on Page 11.)

Let’s all take a take a moment to read Irvine’s Freedom of Speech Ordinance:  “No person shall interfere with the exercise of free speech rights by persons within areas open to the general public in shopping centers . . . ” and,  “free speech rights shall include the right to solicit and collect signatures on petitions.”

What could be more clear?  It’s about time City officials start enforcing Irvine’s Freedom of Speech law, even if it means issuing a citation to Councilmember Melissa Fox.

For more information go to: www.SaveTheVeteransCemetery.org

Q:  What did the Referendum Petition do?

Q:  What happens next, since it appears that the required 12,000 signatures of registered Irvine voters have been gathered?

A:  The Irvine City Clerk confirmed on Monday, November 13th, that 19,125 signatures were correctly submitted for further validation.  That same day, the Petitions were delivered to the County Registrar of Voters, who has 30 days to check the signatures against the voter rolls, deleting invalid ones.  If the Registrar of Voters certifies that the number of registered Irvine voter signatures on the Petition exceeds the required 12,000, then, the next step is up to the Irvine City Council, which will have three options:  The Council can: 1)  rescind the rezoning ordinance it had adopted, thereby keeping the Veterans Cemetery in the Great Park at its original site; or 2)  put the rezoning ordinance on the ballot at the next regular City election, in November, 2018; or, 3) call a special City election that could be in April, or could coincide with the State primary election in June, 2018.

A:  Vote NO!  This will be your opportunity to say NO to the City Council ordinance that rezoned the original Great Park Veterans Cemetery property to allow FivePoint to build 812,000 square feet of office and commercial development.

A:  No, the opposite is true!  FivePoint’s I-5/I-405 freeway location is not better.  Look at the map.  The freeway site is two miles outside the Great Park, at the El Toro “Y.”  It is a site that suffers from noise, air pollution and undetermined extent of toxic contamination.  Veterans have called the site unsuitable, undignified, and even disrespectful.

It’s not faster.  The State’s CalVet officials say their evaluation of the FivePoint freeway site cannot be completed before June 2018.  It then takes another four months for the pre-application process to the federal government.  It’s unlikely that any work could begin at the freeway location until October, 2018, at the earliest.  Meanwhile, the Great Park Veterans Cemetery site was ready for construction back in June 2017.  It’s still ready! 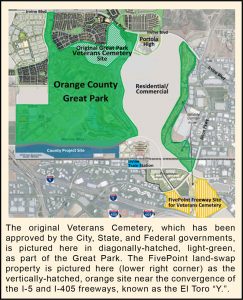 It’s not cheaper.  There have been no estimates of costs for the FivePoint freeway site since that site has never been evaluated for a cemetery.  Despite previous promises of $10 million and more, FivePoint is now providing no funding towards building the Veterans Cemetery.

Meanwhile there has been a detailed cost estimate of $78 million for the cleanup of the land and construction of the Veterans Cemetery in the Great Park.  More than half of these funds would come from the State and Federal government.  Any City funds would come from the State’s $292 million Great Park redevelopment settlement fund.  The Veterans Cemetery will be operated and maintained in perpetuity by the State and Federal governments.  There will be no cost, whatsoever, to the City.

Q:  Do you have documentation supporting your arguments?

Q:  I’ve been hearing claims that the freeway site for the Veterans Cemetery is also in the Great Park.  Is that true?

Q:  I received a flyer in the mail that shows the Great Park Veterans Cemetery site as blighted land filled with debris, while the FivePoint “strawberry fields” site is pictured with rows of strawberries.  Would the actual Veterans Cemetery look like those photos?

A:  No!  This is an absurd comparison.  In either location, the Veterans Cemetery would look like an elegant and fitting Veterans Memorial and Cemetery without any debris, blight . . . or strawberries.  Both sites would have to be completely cleared and cleaned up before any Cemetery construction is begun.

Q:  I received a flyer in the mail that mentions several times that keeping the Veterans Cemetery at the original Great Park site “will bring traffic to Irvine neighborhoods.”  Can this be true?

A: This an absurd and misleading claim.  Think about it!  It is true, of course, that a Veterans Cemetery brings more traffic than vacant land (perhaps 300 cars per day for memorial services and visitations).   Compare this with the traffic generated by FivePoint’s 812,000 square feet of office and commercial development — about 10,000 daily auto and truck trips.  If you live along Irvine Boulevard or Sand Canyon, or anywhere in north Irvine, ask yourself this:  Isn’t a Veterans Cemetery and Memorial Park a better neighbor than FivePoint’s massive office park and commercial development?