Reflections of a Photo-Journalist

On Thursday afternoon, Nov. 9th, two dozen volunteers showed up in the City Hall Plaza with boxes of signed Veterans Cemetery Referendum Petitions to turn-in to the Irvine City Clerk.  I was there as a photo-journalist and also to take part in the brief celebration that marked the end of a truly historic 28-day effort, involving more than 100 Irvine volunteers, to gather what turned out to be a record-breaking 19,125 Irvine resident signatures — apparently far more than required — to give Irvine voters a choice.

The choice for the voters?  Whether (or not) to vote NO on developer FivePoint’s plan to replace the promised, planned and previously-approved Veterans Cemetery in the Great Park with a huge FivePoint office and commercial development.

I was fortunate to photograph many aspects of the Referendum Petition campaign, beginning with hundreds of one-on-one dialogues between volunteer signature gatherers and Irvine residents who eagerly signed the Petition.  I witnessed Irvine’s local democracy at its best.

Sad to report, I also witnessed an ugly counter-campaign — a campaign of so-called “blockers” — that was apparently backed by FivePoint.  The blockers, led by City Councilmember Melissa Fox and Mission Viejo veteran Bill Cook, attempted to disrupt the signature-gathering process by shouting insults, harassing, stalking and otherwise interfering with signature gatherers and voters interested in signing the Referendum Petition.  On a number of occasions, Irvine police officers had to be called to protect the rights of petitioners.

At the City Hall turn-in of the Referendum Petitions, Bill Cook appeared once again, this time to repeatedly “flip-off” folks.  So, tell me, Bill, was your flip-off directed at me, a Korean War veteran and 52-year Irvine resident?  Was it directed at the other veterans on our Save the Veterans Cemetery committee?  Was it directed at the committee chair, Ed Pope, a veteran of the Cold War who served in Berlin and went on to become an award-winning teacher who has resided in Irvine for 45 years?  Or, were you flipping off Sam Castelo, a 90 year-old U.S. Navy veteran, a Filipino-American who served in World War II, Korea and Vietnam, and raised five children here in Irvine? 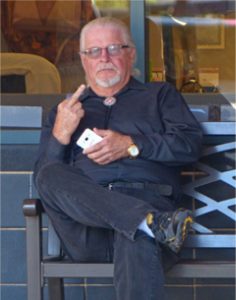 Or maybe you were flipping-off the entire Referendum Petition process — the scores of volunteers who gathered signatures and the thousands of Irvine residents who signed the Referendum Petition in the well-founded belief that the Veterans Cemetery belongs in the Great Park, as promised.  Maybe you were flipping-off these Irvine voters, who believe as I do that they should have the chance to say NO to the FivePoint scheme to take 125 acres of the City’s Great Park property to build huge, unwanted office and commercial projects, generating hundreds of millions in profits for FivePoint but nothing except god-awful traffic for the rest of us.