As ICNV has previously reported, 19,164 Irvine residents signed a Referendum Petition putting an Irvine Measure on the ballot, on Primary Election Day, June 5th, against developer FivePoint’s massive development in the Great Park.  The Ballot Measure will be Ordinance No. 17-08 that the City Council passed on October 10th to rezone, for 812,000 square feet of commercial and industrial development, the 125-acre Great Park site — a site with VA approval for a CalVet-designed Veterans Cemetery, which was slated to receive $10 million of federal funds, and $30 million of State construction funds.

Below is the Argument AGAINST the Measure, and the REBUTTAL to the Argument that was submitted to the City Clerk by the supporters of the FivePoint “land-swap” scheme. (The Measure, not yet assigned a letter, is referred to, below, as Measure X.)

For the first time in decades, on June 5th Irvine voters will decide on the future growth and development of our City.

REBUTTAL to Argument in FAVOR of Adoption of Ordinance No. 17-08

Following Measure X’s defeat on June 5th, Councilmembers Jeff Lalloway and Lynn Schott will re-introduce their resolution to immediately commence construction of the Veterans Cemetery in the Great Park.  The plain truth is that the CalVet-designed and VA-approved Great Park Veterans Cemetery would be under construction today, with $30 million of State funding, if three Councilmembers — Wagner, Shea, and Fox — hadn’t sabotaged the project by adopting Ordinance 17-08.

Ordinance 17-08 is a zone-change giveaway that enables developer FivePoint to build massive office and industrial projects on the 125-acre Veterans Cemetery site in our Great Park, reaping enormous profits.

No wonder FivePoint has spent millions enlisting their favorite politicians, insiders, and political organizations to support their scheme.  They bully, and wangle support by spreading money and fake news.

For example, FivePoint’s political operatives claim a Veterans Cemetery in the Great Park would have graves amid dilapidated buildings and trash, while graves at FivePoint’s preferred site (at the I-5/I-405 interchange) will be in “strawberry fields.”  Nonsense!  The truth is that the Cemetery, at either site, will be built to the highest standards — and maintained forever by the State at absolutely no cost to the City.

Claims that putting the Veterans Cemetery at FivePoint’s freeway interchange site would save taxpayers money are baseless.  So is FivePoint’s phony talk about putting $10 million into the project. This is all part of FivePoint’s strategy to bluff and bully their way into our Great Park, and push our veterans out.

We can’t let them do it.  Vote NO on Measure X! 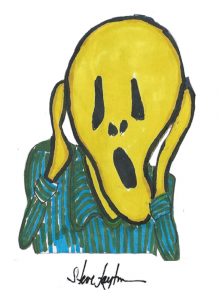 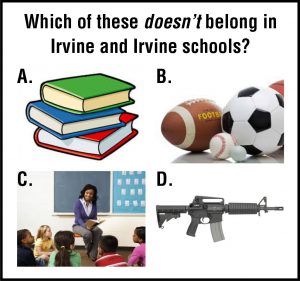 In a recent press release, IUSD Superintendent Terry Walker reported that the School District had received a letter from Malibu attorney Kevin Shenkman, alleging that IUSD’s “at-large” system for electing School Board members was racially discriminatory, and violated the California Voting Rights Act.

In his letter, Shenkman wrote that if, by March 25th, IUSD didn’t agree to “discuss a voluntary change” — moving from at-large elections of Board members to a system of geographically smaller, “single-member districts” —a lawsuit would likely be filed.

Schenkman cited ICNV’s columnist, Carolyn Inmon, who wrote an article in her January SchoolWatch column entitled “Time  for a Change.”  In her article, Inmon pointed out that the current system was, in fact, concentrating Board representation in the northern part of Irvine, while the older areas and older schools elsewhere in the City — were seriously underrepresented on the IUSD Board.