SchoolWatch: Time for a Change

Here’s an idea: What if the Irvine Unified School District — beginning with its five–member School Board — actually took the lead in 2018 and put the issue of IUSD election reform on its agenda?

It’s time. One after another, school districts (and cities too) in Orange County are moving from “at-large” elections to elections by smaller, geographic areas.  The nearby Tustin Unified School District (which includes part of Irvine) and the City of Lake Forest are the two latest examples of local governments adopting this long-overdue reform. 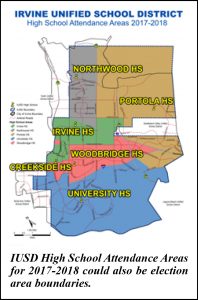 Why is it time for IUSD to make this change?  IUSD is a geographically sprawling district, with nearly 200,000 people and 100,000 voters.  Yet, three of its five Board members live close to one another in the northern-most part of the City.  This leaves most of the residents of Irvine — those below the I-5 who generally live in older neighborhoods with older schools — seriously under-represented on the IUSD Board.

This isn’t a partisan or ideological issue.  It’s a “good government” local democracy issue.  Generally speaking, our local governments — whether city councils or school boards — function better when our elected officials are geographically diverse, and therefor closer to the people they represent.

IUSD should consider undertaking this election reform right away.  It should be relatively simple to actually implement the “election by area” reform.  IUSD is already divided into five high school attendance areas.  If these attendance areas became the new election areas, each of Irvine’s high schools (and their “feeder” elementary and middle schools) would have its own Board member.