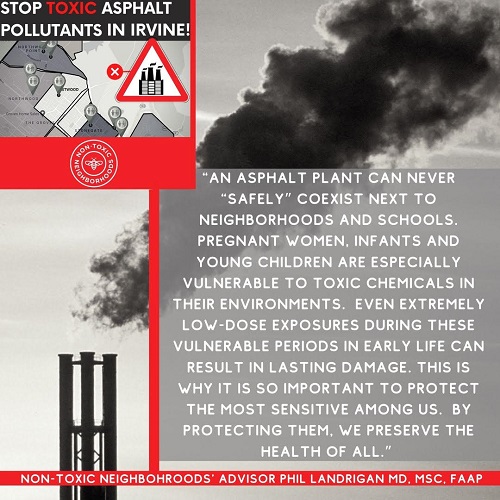 My name is Kevin Lien. I am an Irvine native and a retired physician.

In 2018, my wife and I bought what we believed to be our dream home in north Irvine. We were excited to be establishing roots in such a beautiful community — filled with great schools, wonderful neighbors, and plenty of outdoor space for our whole family to enjoy.

However, we soon realized that our “dream home” had been built less than 1.5 miles away from an undisclosed asphalt plant. Our home — and our neighbors’ homes — were frequently inundated with acrid asphalt odors.

I also discovered that All American Asphalt is the biggest polluter in Irvine. The plant emits 221 pounds of benzene and nearly 1,800 pounds of formaldehyde every year. Both chemicals are known human carcinogens.

As a medical doctor, I understand the health risks associated with inhaling those cancer-causing chemicals every day, especially for children. Imagine how parents in my neighborhood feel when our kids come home with nose bleeds, headaches, and respiratory problems after riding their bikes down the street.

When I first became aware of the problem, I contacted the City of Irvine for help. After a year of innumerable complaints and no relief, I joined my neighbors in reaching out directly to the Irvine City Council for assistance. Instead of supporting her constituents, Mayor Farrah Khan told us there was nothing she could do to help and referred us to the State’s regulatory agency, the South Coast Air Quality Management District. This is the same State agency that has received more than 1,200 complaints from my neighbors but has done nothing to limit production at the asphalt plant.

The only member of the City Council who has shown a genuine interest in helping is Larry Agran, who is a public interest attorney. Larry has repeatedly tried to get the City to take legal action to shut down the asphalt plant and relocate it out of Irvine, in a remote area far away from homes and neighborhoods. But the other four members of the Council — Mayor Khan and Councilmembers Anthony Kuo, Tammy Kim, and Mike Carroll — have refused to act. Despite being cognizant of potential health hazards and of the ongoing public outcry, they approved the continued development of communities to within approximately a half mile of the asphalt plant.

It is clear to me that Mayor Khan and Councilmembers Kuo, Kim and Carroll are perfectly happy to just let this public nuisance and potential health crisis drag on for years and years, no matter how many Irvine residents are adversely impacted.

During a recent City Council meeting, Mayor Khan had the nerve to say that she had done more for the environment in the past two years than what prior City Councils accomplished in the last 50 years. I can’t imagine that any of my north Irvine neighbors would agree with that statement.

I’m tired of Mayor Khan’s nonsense: It’s all talk and no action. The Mayor shouldn’t be bragging about her environmental leadership while refusing to help protect thousands of Irvine residents who are inhaling dangerous toxic emissions every day. 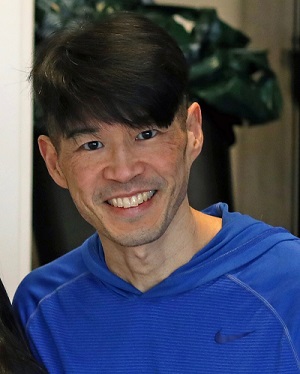 Kevin Lien
A native of Irvine, Kevin returned home with his wife in 2000. A retired physician and father of two, he enjoys spending time with family and friends and is an avid gym rat, an insatiable foodie, and a daydream believer with a penchant for photography.