CityWatch (April): No on B!

Well, here we are: The very unpopular Zone Change Ordinance No. 17-08 — adopted by the City Council on a 3-to-2 vote (Mayor Wagner and Councilmembers Fox and Shea voting Yes), at the behest of developer FivePoint — is now on the June 5th ballot, officially designated as “Measure B.” 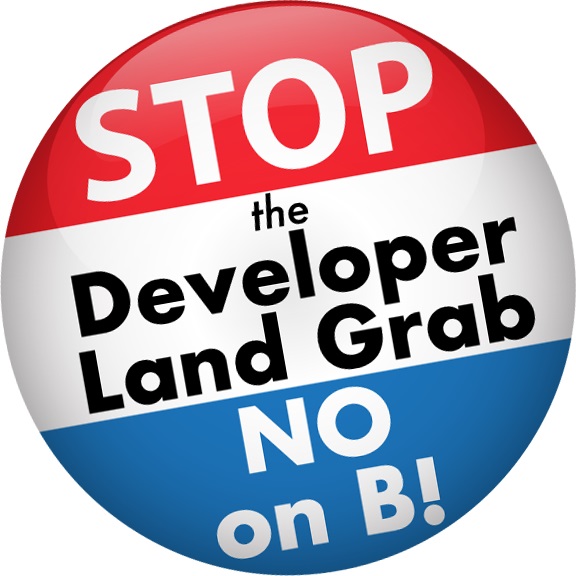 Developer FivePoint is urging a “Yes on B” vote, claiming Measure B is ONLY about building the long-promised State Veterans Cemetery in Irvine.  THIS IS FALSE!

THE TRUTH IS: FivePoint ballot Measure B (Zone Change Ordinance No. 17-08) is really about getting Irvine voter approval for their complicated land-swap and development scheme which would:

1) replace the planned (since 2014) and CalVet approved (since 2016) Veterans Cemetery in the Great Park;

2) rezone the 125-acre Veterans Cemetery site in the Great Park for massive FivePoint development along Irvine Boulevard; and,

3) relocate the Veterans Cemetery to an undesirable site 3 miles away, at the busy, noisy I-5/I-405 freeway interchange, known as the El Toro “Y”.

Since hundreds of millions of dollars in quick profits for developer FivePoint are at stake, you can imagine the misinformation and outright lies that FivePoint and their political consultants are willing to tell to get voter approval of Measure B.

Let’s look at a couple of whoppers you need to watch out for:

FivePoint Lie # 1: A “yes” vote on Measure B is the only way to get the Veterans Cemetery built.

This is absolutely false! Here is the heartbreaking truth. The Veterans Cemetery in the Great Park would be under construction right now, except for the fact that FivePoint got three pro-developer members of the City Council (Wagner, Shea and Fox) to kill the project, even though it had received all necessary approvals from the City, State (CalVet) and U.S. Department of Veterans Affairs. In fact, when Mayor Don Wagner and Councilmembers Christina Shea and Melissa Fox embraced the FivePoint land-swap in June, 2017, they rejected a $30 million State budget grant to begin construction of the Veterans Cemetery at the Great Park site — starting with demolition, site clean-up and site preparation — in accordance with the CalVet approved 333-page Concept Plan and Design.

The truth is that even though nearly a year has been lost because of FivePoint and three City Councilmembers, if voters say “NO on B” on June 5th, construction of the “shovel-ready” Veterans Cemetery in the Great Park, as originally promised, planned and approved, can begin almost immediately.

FivePoint Lie # 2: FivePoint’s Measure B involves a “simple swap of land,” with no adverse environmental effects for current Irvine residents.

Wrong! This is a big, fat lie that should be of concern to every Irvine resident! Under developer FivePoint’s “simple swap,” the planned Veterans Cemetery in the Great Park would be relocated to a 125-acre site next to the I-5/I-405 freeway interchange, where it would presumably be built later. But developer FivePoint would take ownership of the 125-acre Great Park Veterans Cemetery site (next to Irvine Blvd.), along with zoning entitlement to build 812,000 square feet of office and industrial development. This massive development, in turn, would bring with it 10,000 additional cars and trucks every day, making the terrible traffic on Irvine Boulevard, Sand Canyon, Jeffrey and Culver even worse, and causing a spike in localized air pollution.

For years now, Irvine residents have been increasingly angry about City Council land-use decisions that are good for developer FivePoint’s bottom line, but are producing out-of-control traffic and a deteriorating quality of life for the rest of us. Finally, for the first time in 25 years, Irvine residents have the chance to say NO by voting NO! NO on B!