More Nuclear is No Solution to Climate Crisis

It doesn’t take a lot of imagination to picture what one precision-guided rocket could do to this field of canisters which sits in the wide open at SONGS.

If you live in Orange or San Diego County, hopefully you’re aware that San Onofre Nuclear Generating Station (SONGS) has been turned into a nuclear waste dump for the foreseeable future. Regardless of where you live, you’re wise to be tracking domestic and foreign moves to increase reliance on nuclear energy.

The United States ushered in the atomic age in 1945 by dropping a uranium bomb on Hiroshima and a plutonium bomb on Nagasaki. We now have 3.6 million pounds of these and other lethal radioactive elements sitting on the beach at SONGS in temporary canisters, scheduled to remain there indefinitely.

No one has figured out how to safely dispose of deadly nuclear waste. Yet, to combat the climate crisis, the United States and the world propose to create more of it by extending the life of existing nuclear power plants and building new ones. Has the world learned nothing from the catastrophes of Three Mile Island, Chernobyl, and Fukushima?

SONGS is Now a Nuclear Waste Dump
Since SONGS closed down in 2013, controversy has swirled around the dry waste storage systems selected by the plant’s operator, Southern California Edison (SCE).

As is true of all U.S.’s nuclear plants, SONGS wasn’t designed for nuclear waste storage after decommissioning. The Nuclear Waste Act of 1982 mandated construction of a deep geological repository to store the nation’s spent fuel for the hundreds of thousands of years it remains deadly. However, as hopes for a repository at Nevada’s Yucca Mountain collapsed out of concern about groundwater contamination, talk turned to creating “interim” storage sites in Texas and New Mexico, though those states are balking at the prospect too. 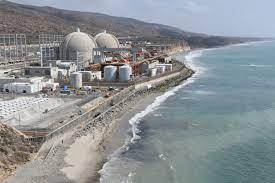 The current reality, as stated by the Nuclear Regulatory Commission (NRC), is that a repository might never materialize, saddling nuclear plants with storing spent fuel onsite indefinitely.

As of last August, all of SONGS’s spent fuel was transferred into 123 dry storage canisters, each with the potential to release as much highly radioactive Cesium-137 as was released during the 1986 Chernobyl disaster.

The potential consequences of cracks are far worse than small radiation releases into the atmosphere: Canisters are filled with helium expressly to limit corrosion and prevent explosions triggered by air or water getting inside.

Contrast this with thick-walled (10-19 inches) casks used in most countries which aren’t susceptible to stress corrosion cracking and are designed for maintenance, inspection, storage and transport. 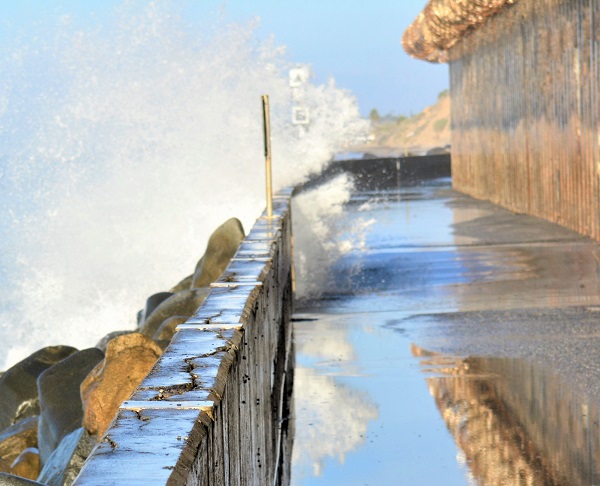 Waves reaching the top of the seawall at SONGS (Photo credit Gary Headrick).

As a waste storage location, SONGS is highly risky. Situated along the shoreline and in an earthquake zone, it’s vulnerable to destructive seismic land shifts and tsunamis. Photographs show waves already splashing near the top of its seawall at high tides.

If the cooling air vents which surround the canisters become blocked by sand, water, salt or other debris, clearing the vents quickly might be impossible. Air cooling could cease, and even Holtec admits that within a few days the temperatures could exceed 1000°F, near the maximum temperature the canisters can withstand.

Also disturbing is the canisters’ vulnerability to terrorist attack, as they’re stored in the wide open and easy targets.

Pleas from nuclear safety advocates to transfer the radioactive waste into safer thick casks have been rebuffed by both SCE and the NRC.

Nuclear Extensions and Expansions
The U.S.’s nuclear reactors were originally licensed for 25 to 40 years of operation. The NRC has granted operating extensions up to 60 years to several dozen reactors, raising concerns about worn-out components and outdated operating systems.

Kalene Walker is a concerned Orange County resident who researches the nuclear waste storage problem. In response to her inquiry asking if there are critical parts of reactors that can’t ever be inspected, Dr. Allen Hiser (NRC’s Senior Technical Advisor for License Renewal Aging Management) admitted that some components can’t be inspected because of inaccessibility or high radiation hazard.

Nuclear energy is neither renewable nor sustainable, and it costs more now than solar or wind energy.

With the nuclear waste problem completely unsolved, it’s appalling that 50 new nuclear reactors are under construction globally. In the U.S., 24 applications to build new reactors have been submitted since 2007.

Creating more U.S. nuclear plants and deadly waste is insane when we can’t guarantee the safety of either existing aging plants or the 80,000+ metric tons of spent fuel already generated. The argument that nuclear is needed to address global warming reflects the same foolhardy mindset — ignoring adverse long-term impacts for short-term gains — that created the climate crisis in the first place.

We mustn’t kick the radioactive nuclear waste can down the road any longer. It’s time to tackle the problem head-on.