Meet the “NO on B” Team for Irvine Mayor & Council 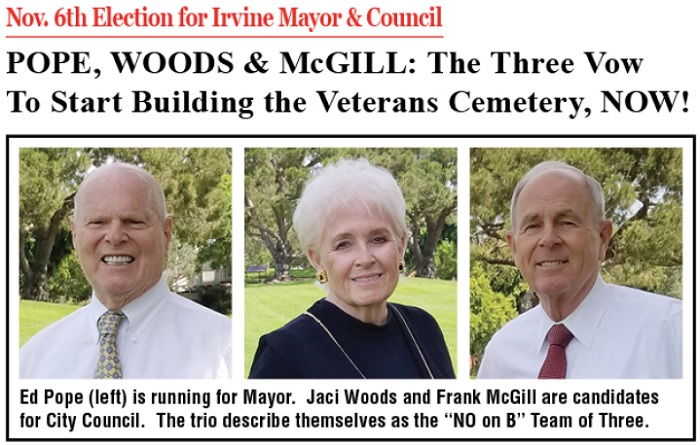 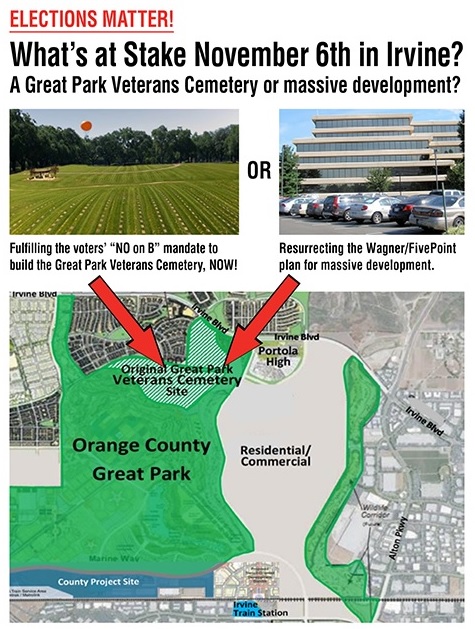 Ed Pope, founding chair of the citizens’ committee to Build the Great Park Veterans Cemetery — and a recently announced candidate for Mayor of Irvine — is challenging Donald Wagner, who is seeking re-election Nov. 6th to a second two-year term as Mayor.

In an exclusive interview with Irvine Community News & Views, Pope, himself a U.S. Army veteran, and an Irvine resident since 1972, declared: “The plain truth is that our long-planned and State-approved Veterans Cemetery in the Great Park would be under construction right now — in fact, it would be half finished — if Mayor Wagner, joined by Councilmembers Melissa Fox and Christina Shea, hadn’t purposely derailed the project.”

Pope, a retired high school teacher, continued: “In what can only be described as a corrupt bargain, Wagner, Shea and Fox voted last year to give away 125 acres of our Great Park property to developer FivePoint, along with permission for FivePoint to actually replace the planned Great Park Veterans Cemetery with massive office, industrial, and apartment development.”

Pope added: “For more than a year now, Wagner has been working at the behest of developer FivePoint to promote FivePoint’s unpopular landswap-and-development scheme that was known as Measure B on the June 5th ballot.” 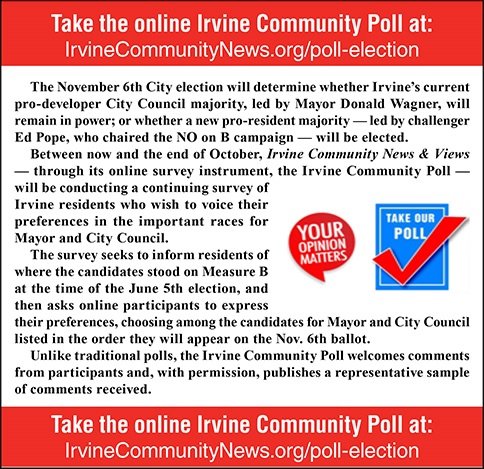 Voter Revolt!
Pope explained that even after a voter revolt and a June 5th Irvine referendum — when by a 63% to 37% margin 28,638 Irvine voters said “NO on B!” — Wagner, Shea and Fox persisted on behalf of multi-billion-dollar developer FivePoint.

At a tumultuous July 10th City Council meeting, Wagner, Shea and Fox voted down a two-part motion put forward by Councilmembers Jeff Lalloway and Lynn Schott to: 1) honor the voters’ mandate against the FivePoint development scheme; and, 2) immediately begin construction of the Veterans Cemetery at the original Great Park location.

For weeks, Wagner, Shea and Fox asserted that the voters’ NO on B decision was a vote against any Veterans Cemetery in Irvine.  “Of course, this was untrue,” said Pope.  “The NO on B vote was a resounding mandate to build the Veterans Cemetery at its original location in the Great Park…and to start building it now!”

According to a highly placed source at City Hall, “Wagner, Shea and Fox are desperate.  They rely on FivePoint for their campaign funding.  And they know that even after their Measure B giveaway scheme was repudiated by the voters, FivePoint still wants to get control and ownership of the original 125-acre Great Park Veterans Cemetery site designated by the City and State in 2014 as the specific location for the Cemetery.” 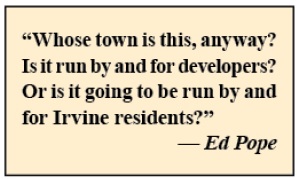 This same City Hall source added, “FivePoint wants to develop the hell out of the original Veterans Cemetery site.  They want to monetize it for hundreds of millions of dollars in profits.  And let’s face it: Right now FivePoint completely controls three votes on the City Council — the Mayor and Shea and Fox.”

“NO on B” Team of Three
Describing what’s at stake in this election, Pope said, “We have to ask ourselves: Whose town is this, anyway?  Is it run by and for developers?  Or is it going to be run by and for Irvine residents?  Someone had to challenge Wagner, who is apparently more interested in serving his political patron, FivePoint, than the people of Irvine.”

Also on the ballot are two NO on B teammates of Pope — Jaci Woods and Frank McGill — longtime Irvine residents and advocates for controlling growth and development.  They are running to fill the two Council seats that are open because Councilmembers Lalloway and Schott decided to not seek re-election.

Woods, a businesswoman and real estate broker, and McGill, a retired urban planner, joined with Pope to lead the NO on B campaign to victory last June.   All three were prominent in online video clips seen by tens of thousands in Irvine.

Now describing themselves as the NO on B Team of Three, the trio — Pope, Woods and McGill — have signed a public pledge:  They promise that, if elected, their first order of business will be to vote on a Council resolution and directive to immediately begin construction of the Veterans Cemetery at its original site in the Great Park. 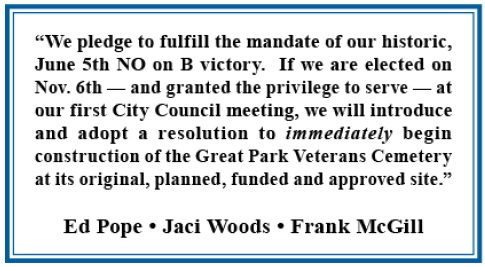 According to Ed Pope, their next order of business will be to restore the City’s planning processes to their award-winning ways before developers took control of the City Council in 2012.