CityWatch (May): Irvine Voters Invoke Power to Say “NO!”

Last October and November, during an amazing 28-day period, more than 19,000 Irvine residents signed a special petition circulated by hundreds of volunteers.  The petition campaign, launched by the citizens’ committee to Save the Veterans Cemetery in the Great Park, invoked the rarely used power of referendum enshrined in our local democracy.  At the referendum launch, committee chair Ed Pope, himself a U.S. Army veteran and 46-year Irvine resident, declared:  “The power of referendum is the power of Irvine citizens to say NO — even
Hell, NO! — to their elected leaders.”

The local referendum petition that 19,164 Irvine residents signed last fall included a 150-word statement, right at the top, that described exactly what the referendum was intended to do.  It called upon the Irvine City Council to “reconsider and repeal” the obnoxious Zone Change Ordinance (No. 17-08), that three members of the City Council (Mayor Donald Wagner and Councilmembers Christina Shea and Melissa Fox) adopted on October 10, 2017, at the urging of multi-billion-dollar land developer FivePoint.

Throughout 2017, Wagner, Shea and Fox were big cheerleaders for FivePoint’s unpopular, three-part land-grab and development scheme to: 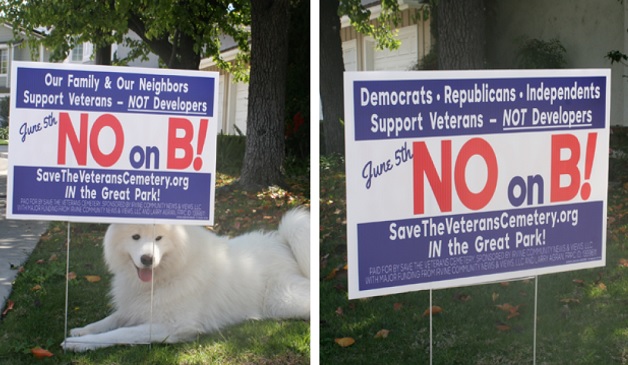 This land-grab and development scheme was calculated to enrich FivePoint with quick real estate profits estimated at $500 million or more.  Meanwhile, FivePoint’s ownership and intense development of what is now our Great Park property would bring an added 10,000 cars and trucks every day to Irvine Boulevard, Sand Canyon, Jeffrey, Bryan, and other streets and neighborhoods throughout north Irvine.  Obviously, this would devastate both new and older north Irvine neighborhoods — and central Irvine, too — with waves of rush-hour traffic and gridlocked intersections.

And the fate of the long-promised Veterans Cemetery?  The planned, beautiful, State-approved Veterans Cemetery in the Great Park would be relocated — I would say, relegated — to an unattractive site, 3 miles away, alongside the interchange of the I-5 and I-405 freeways, commonly known as the El Toro “Y”.  (Trying to put lipstick on a pig, FivePoint and the Wagner-Shea-Fox trio on the City Council have cynically dubbed this location “the strawberry fields” instead of what it really is…a busy, noisy, pollution-afflicted freeway site.)

It’s no wonder that Irvine citizens rose up and revolted against the Council action with a referendum petition, calling upon the Council to repeal Zone Change Ordinance 17-08 and Save the Veterans Cemetery in the Great Park.

At its meeting of January 9, 2018, after the Registrar of Voters officially certified the signatures on the referendum petition, the Council had a last chance to listen to Irvine voters and “reconsider and repeal” its prior action.  Instead, on a 3-to-2 vote (with Councilmembers Jeff Lalloway and Lynn Schott dissenting), Wagner, Shea and Fox arrogantly disregarded the historic referendum petition and the 19,164 Irvine residents who signed it; instead, they insulted Irvine voters, echoing previous slanders that the voters were ignorant and didn’t know what they were signing.

But, fortunately, the referendum power reserved to the voters cannot be thwarted by an arrogant City Council that disrespects and refuses to listen to the people.  By law, when the City Council refused to repeal Zone Change Ordinance 17-08, they were required to put the issue on the ballot so Irvine voters would have the chance to say “NO” and override the City Council.  That’s what the June 5th election and the “NO on B” campaign is all about.  It’s about the power of the people to have the last word.  And, in this case, the last word should be “NO” — NO on Measure B!

Three Milestones to Opening the Veterans Cemetery in the Great Park

MILESTONE NO. 1.  On June 5th, a majority of Irvine voters must cast “NO on B” ballots, thereby rejecting Zone Change Ordinance No. 17-08 — the land-swap scheme that would permit developer FivePoint to replace the planned Veterans Cemetery in the Great Park with massive office and industrial projects.

MILESTONE NO. 2.  On June 12th, City staff is directed to immediately commence construction of the previously approved Veterans Cemetery in the Great Park — beginning with demolition, cleanup, and site preparation — in accordance with the approved 333-page CalVet design and Concept Plan.

MILESTONE NO. 3.  Opening Ceremony!  The Veterans Cemetery in the Great Park becomes operational by Veterans Day, November 11, 2020.  The Cemetery, by law, will be operated and maintained in perpetuity by the State (CalVet) and the U.S. Department of Veterans Affairs at no cost to the City.