Does Rep. Mimi Walters Represent Irvine and You on Climate Change?

Contrary to the declarations and actions of President Trump, Americans everywhere want their government to tackle climate change.  The Yale Project on Climate Change Communication, a remarkable national survey spanning 8 years and covering over 18,000 adults, found that in all 50 states a solid majority of the public believes global warming is happening (60 percent to 78 percent), and favors regulating CO2 as a pollutant (66 percent to 81 percent). 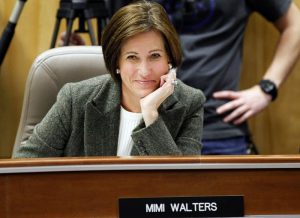 Here in California, 75 percent of us believe global warming is happening, and 77 percent want the government to regulate CO2 as a pollutant.

In a representative democracy we should expect Rep. Walters to assume a stance on climate change that generally reflects the opinions of the majority of her constituents.  The plain fact is that in word and deed she has failed to represent the people of the 45th CD. 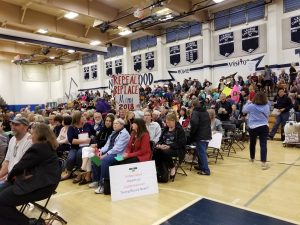 Thousands have been protesting Rep. Mimi Walters’ record on climate change, including here at this Irvine Town Hall meeting, where Walters was a no-show.

Worse still, Walters is currently co-sponsoring the Stopping EPA Overreach Act of 2017 (House Resolutions 637) which is blatantly designed to block any national action on climate change.  It amends the Clean Air Act to exclude CO2 from regulation, and specifically nullifies any existing laws aimed at addressing global warming.  Walters also co-sponsored an identical bill in the last Congress.

What Walters should do

Instead of actively thwarting the will of her constituents, Rep. Mimi Walters should be seizing new opportunities in the House that signal a long-overdue shift in the Republican Party — away from an intransigent stance against addressing climate change, and toward policies that acknowledge the magnitude of the problem and the need for bipartisan solutions.

Next, Walters should also step up and co-sponsor a first-ever all-Republican House Resolution introduced on March 15th calling for action on climate change.

With the 2018 mid-term election looming, Walters seems to be scrambling to at least appear to be responsive to the massive public protests of her deplorable record on climate change.  On July 13th, she voted with 45 other Republicans and every House Democrat to successfully block an extremist Republican amendment to an appropriations bill that would have stripped funding for the Defense Department to prepare for the impending damage to military bases as a result of climate change.

Previously in April, Walters posted a picture on her Facebook page of herself posing with representatives from the local chapter of the Citizens’ Climate Lobby (CCL), thanking them for the information they provided about climate change solutions.  CCL lobbies House members nationwide to enact a national tax on carbon with the collections returned to every American household.

Climate change is the most serious environmental problem humankind has ever faced.  It’s deeply troubling that some of our representatives can be so out-of-step with their constituents on climate change.  Are they genuinely clueless about what their constituents think, or do they just not care?  Either is unacceptable.