CityWatch: The Choice between a Veterans Cemetery or Massive Development

Even as Assembly Bill 368 — to again designate and fund construction of a Veterans Cemetery at the original 125-acre “ARDA” site in the Great Park — is moving through the State Legislature, Irvine Councilmember Christina Shea (now Mayor) is trying to steer the Council toward yet another unplanned, unstudied, and unapproved “alternative” site for a Veterans Cemetery.

Really? Yet another site? Why? What is going on here? The truth of the matter is that this isn’t really about finding a “better” location for the long-promised Veterans Cemetery. There isn’t a better site! This is really about a land-use choice between putting a beautiful Veterans Memorial Park and Cemetery on the ARDA site at the Great Park, or letting developers get their hands on that property to make some big money…fast.

It is well known that developer FivePoint Communities has long coveted the 125-acre, City-owned ARDA site — hoping to get hold of the parkland property for little or no money, and then rezone and sell it to other developers for as much as $3 million to $7 million per acre. What does FivePoint get out of it? A windfall profit of at least $500 million. What does the public get out of it? More unneeded and unwanted office, industrial and apartment development — along with the added 10,000 auto and truck trips every day that this kind of development brings.

That’s what FivePoint’s landswap-and-development scheme — Measure B on last June’s ballot — was all about. Thankfully, voters saw through it, rejecting the brazen land-grab, 63% to 37%. Irvine voters made it clear that they want the Veterans Memorial Park and Cemetery, and they want it built on the original ARDA site. They don’t want that “hallowed ground” to be turned into yet another developer scheme, championed by Councilmembers who, so far, are apparently more interested in pleasing developer FivePoint than in giving Irvine residents what they want…and what they were promised.

Click here to take our online poll…
and, if you wish, add your comments. 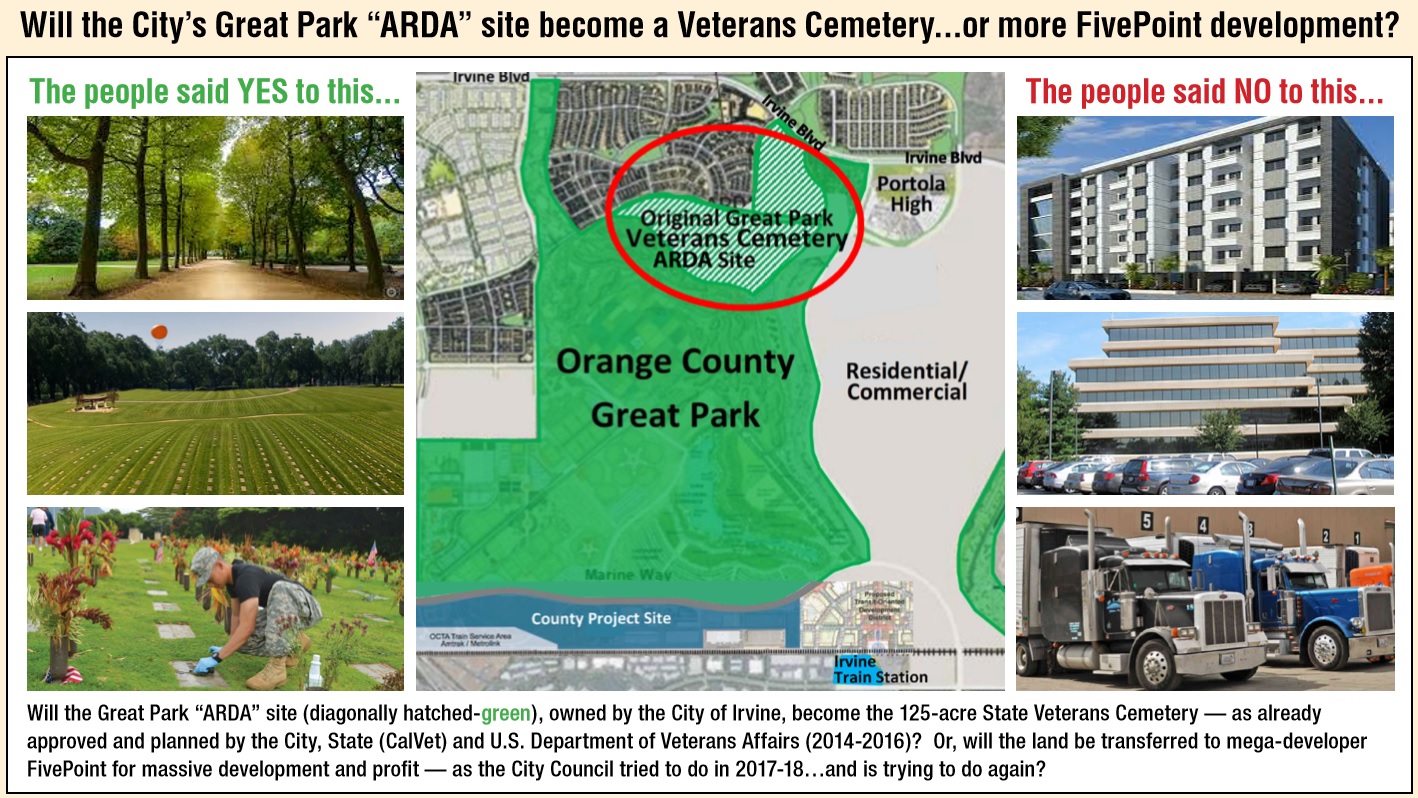