CityWatch (September): Be a Smart Voter…Again.

It was a case of “David” (Irvine voters) vs. “Goliath” (developer FivePoint).  And, like the Biblical parable, David WON!  Despite a million-dollar campaign of deliberate confusion, misrepresentation and outright lies, Irvine voters rejected the FivePoint landswap-and-development scheme and sent a powerful message back to the Mayor and City Council to immediately begin construction of the Veterans Cemetery in the Great Park — at its original site, as planned and approved dating back to 2014. 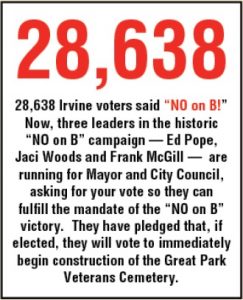 Council Ignores Voter Mandate
The “NO on B” mandate to “build the Great Park Veterans Cemetery” was ignored and dismissed on July 10th, when Mayor Donald Wagner and Councilmembers Melissa Fox and Christina Shea arrogantly refused to implement the will of the people.  They voted down a motion to begin construction of the planned and approved Great Park Veterans Cemetery immediately.  In effect, Wagner, Shea and Fox told Irvine’s 28,638 “NO on B” voters, “We don’t care what you think.  We’re doing what FivePoint wants us to do.”

Developer Desperation
Now, developer FivePoint is desperate to hold and reinforce its Council majority by getting the voters to re-elect Wagner and elect two pro-FivePoint Councilmembers to fill the seats that are open, now that Councilmembers Jeff Lalloway and Lynn Schott are not seeking re-election.

With all that at stake, get ready for another million-dollar — or even two million dollar — FivePoint-directed campaign blitz. FivePoint and their allied developers will soon start spending hundreds of thousands of dollars per week on TV ads, attack mail, and online postings — supporting their “Yes on B” surrogates (see list in right column) on the ballot and attacking the only three candidates on the November 6th ballot who were courageously leading the “NO on B” fight earlier this year.

So, when you see vicious attacks on the “NO on B” Team — Ed Pope for Mayor and Jaci Woods and Frank McGill for Council — just remember that the attack ads, attack mail and attempts at character assassination are originating with developer FivePoint and their political operatives.  Irvine voters weren’t fooled in the June election.  I’m betting they won’t be fooled this time, either.  In any event, every voter should be alert.

Full Disclosure and Endorsement
Meanwhile, full disclosure: I’m personally and enthusiastically supporting Ed Pope for Mayor, who chaired the remarkable “NO on B” referendum campaign, and Jaci Woods and Frank McGill for Council, who both appeared in popular videos and helped lead the way to victory. The three, of course, have pledged that if they are elected, their first order of business will be to vote to immediately commence construction of the Veterans Cemetery on its original 125-acre site in the Great Park…as promised and planned.

For more information about Ed, Jaci and Frank, you can visit their websites at: