CityWatch: Here they go again! The Latest Shea-Fox Scheme To Delay and Defeat the Veterans Cemetery

In June of 2017, three Irvine City Councilmembers — Mayor Donald Wagner and Councilmembers Christina Shea and Melissa Fox — banded together to actually reject $30 million in State funding and block construction of one of the most popular public projects in the City’s history:  the construction-ready State Veterans Cemetery at the Great Park that was planned, designed and approved (2014-2016) by the City, State (CalVet), and the U.S. Department of Veterans Affairs.

If Wagner, Shea and Fox hadn’t blocked initial construction at the last minute, the first phase of the beautiful, 125-acre Great Park Veterans Cemetery would now be nearing completion as planned, ready to be operational by the original target date: Veterans Day, November 11, 2019.

But, of course, the sad reality is that the timely construction of the Veterans Cemetery has not come to pass.  Instead, at the behest of mega-developer FivePoint Communities, the Wagner-Shea-Fox City Council trio adopted a “delay-and-defeat” strategy.  They continue to cynically promote one scheme after another in an apparent attempt to kill the originally approved Great Park Veterans Cemetery [see “C” on map] and eventually transfer the 125-acre site to FivePoint with entitlement for massive development. 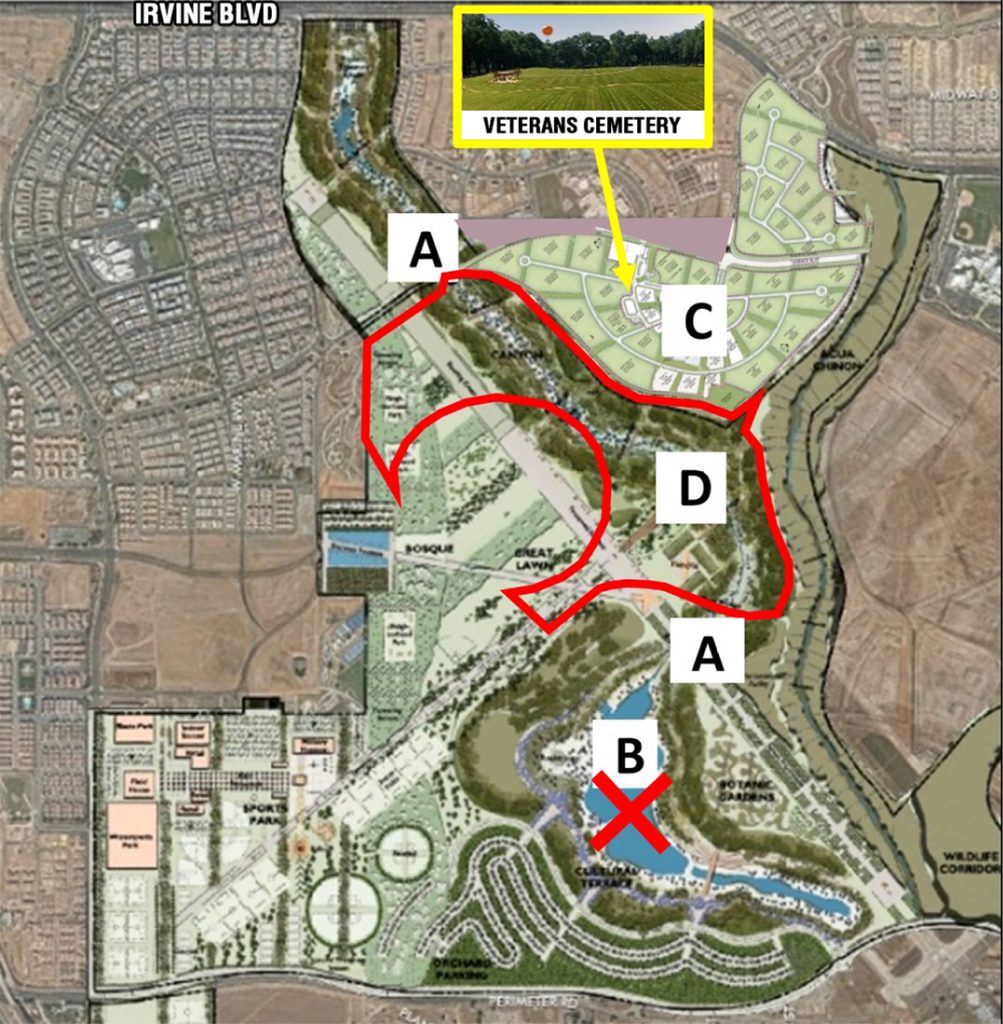 The 2010 award-winning Great Park Master Plan, pictured here, included a 200-acre Great Park Upper and Lower Canyon [A] and stream emptying into a Lake [B]. Also pictured here is the original 125-acre Great Park Veterans Cemetery site [C] that, from 2014-2016, was planned, designed and approved by the City, State (CalVet) and the U.S. Dept. of Veterans Affairs. The latest City Council “delay-and-defeat” scheme — put forward by Councilmembers Christina Shea and Melissa Fox — would relocate the Veterans Cemetery [D, bordered in red] to replace the planned Great Park Canyon and eliminate the Lake. The Shea-Fox scheme would take nearly seven years to win State and Federal approval, and then actually complete construction.

Last year, on June 5th, Irvine voters defeated Measure B.  This was the Wagner-Shea-Fox “landswap-and-development” scheme to replace the already-approved 125-acre Veterans Cemetery in the Great Park with 812,000 square feet of office, industrial and apartment development, while relocating the planned Veterans Cemetery miles away to a noisy, undesirable site alongside the I-5 and I-405 freeway interchange, known as the “El Toro Y”.  Despite a $1 million FivePoint campaign, an overwhelming majority of Irvine voters, 63% to 37%, rejected the scheme and told the City Council they wanted the Veterans Cemetery built at the original 125-acre Great Park site.  But the Wagner-Shea-Fox Council majority refused to listen.  Instead of starting construction of the Veterans Cemetery at the original location, they said they’d search for yet other locations.

So, now, Shea and Fox are pushing a cynical plan (they call it their “golf course” plan) to replace the Great Park Canyon and Lake that were, by far, the most popular features in the award-winning Great Park Master Plan adopted in 2010.  Under the Shea-Fox scheme, an unneeded and unwanted, down-sized “golf course” would be built on a remaining 63 acres.  At FivePoint’s urging, this temporary “golf course” would no doubt later be re-zoned for more massive, traffic-inducing development.

The Shea-Fox scheme is bad planning intended as a thinly-veiled giveaway to developer FivePoint.  Worse yet, according to City staff, it would take nearly seven years — until mid-2025! — to study, plan, obtain the necessary State and Federal approvals, and then actually build the Veterans Cemetery at the displaced Canyon-and-Lake site in the Great Park.

In promoting their latest scheme, Shea and Fox — who, together, have taken tens of thousands of dollars from FivePoint in campaign funds and political favors — apparently think Irvine voters can be ignored time and again.  The plain truth is that Irvine residents want the Veterans Cemetery at its originally approved Great Park location — and they want construction to begin NOW.  The 30-month construction project should have started nearly two years ago, beginning with demolition of old buildings and runways, the preservation of historic features such as the old air traffic control tower, and implementation of a perimeter system of trees and trails — all of this contemplated and set forth in the State’s remarkably detailed 333-page Concept Plan and design for the approved Veterans Cemetery at the original Great Park site.

In pursuing their delay-and-defeat strategy, including their latest scheme, Shea and Fox are testing voters’ patience yet again.  It will be interesting to see how many more Shea-Fox shenanigans Irvine voters will tolerate before insisting that, once and for all, the will of the people must not only be heard…but implemented.