2019.  This is the year when construction of Phase 1 of the planned-and-approved Veterans Cemetery in the Great Park was supposed to be completed and become operational by Veterans Day, November 11, 2019.   Construction of the 125-acre Veterans Cemetery — beginning with demolition of old buildings, site cleanup, and preliminary site preparation — was “good to go” in the spring of 2017.

A remarkably detailed 333-page Concept Plan and design plan had been prepared and approved by the State (CalVet) and the U.S. Department of Veterans Affairs, in 2016.  In May of 2017, the Governor and State legislators announced that a special $30 million appropriation was going to be included in the 2017-2018 State Budget so that construction of the Great Park Veterans Cemetery could begin right away. 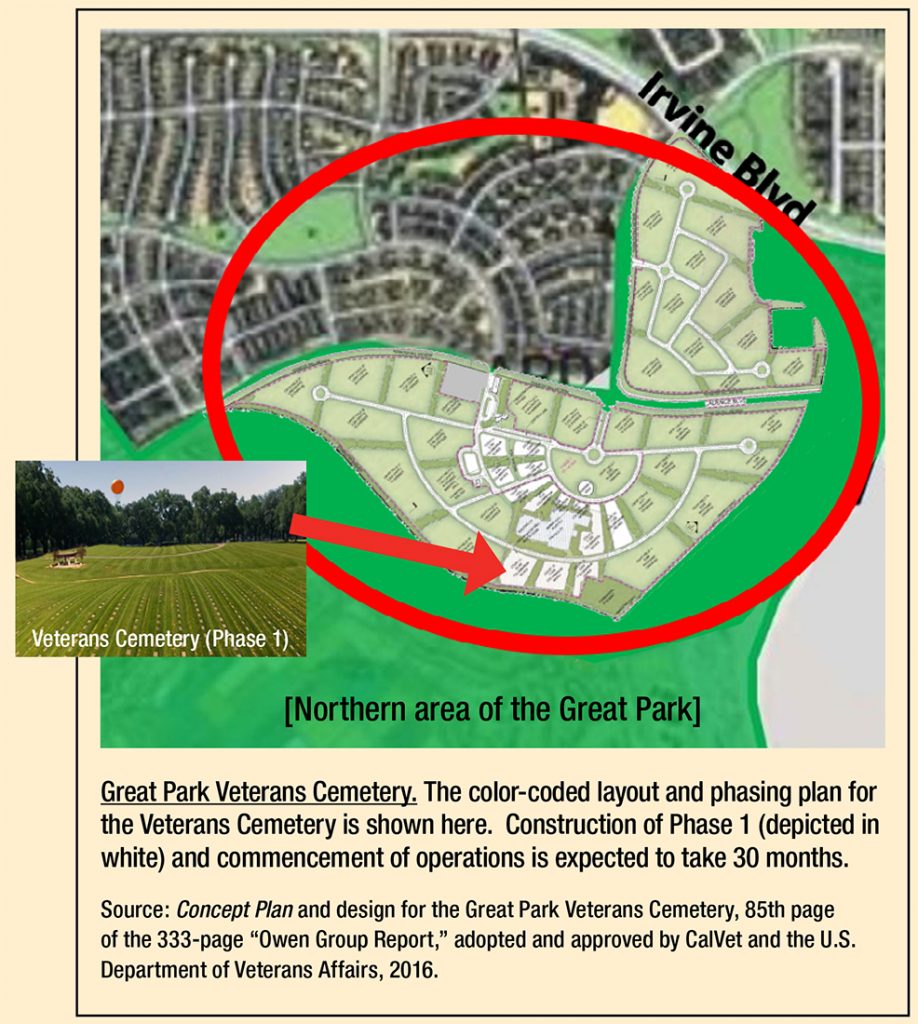 Their scheme was to kill the Veterans Cemetery at the 125-acre Great Park site and replace it with zoning for massive development, worth hundreds of millions of dollars to FivePoint.  Then, the Veterans Cemetery project would be entirely re-planned and relocated to a noisy, undesirable freeway site alongside the I-5/I-405 interchange at the El Toro “Y.”  Outraged Irvine voters forced this scheme onto the Irvine ballot, where — as the notorious Measure B — it was rejected in June 2018 by an overwhelming vote of 63% to 37%, despite the fact that FivePoint spent over $1 million to try to gain voter approval for their unpopular scheme.

Plainly, Irvine voters wanted no part of the FivePoint replace-and-develop scheme. They wanted then — and they want now — construction of the Veterans Cemetery at the original Great Park site.  And they want construction to begin immediately.

But, for the balance of 2018, Irvine residents watched in dismay as the City Council — led by the duo of Councilmembers Shea and Fox — pushed for what they called the golf course site for the Veterans Cemetery.  The so-called “golf course” site would be in the middle of the Great Park where, according to the original, award-winning Great Park Master Design, there is supposed to be a magnificent 200-acre canyon.  The so-called golf course site has never before been considered for a Veterans Cemetery.  There are no plans, no designs, no State approvals and, of course, no funding.  So, when could we expect to see the Veterans Cemetery at the “golf course” site built and operational under this latest Shea-Fox scheme?  According to City staff, sometime in mid-2025!  Nearly 7 years from now!

This is beyond crazy.  It’s cruel.  Think of the aging Orange County veterans — the thousands still with us from World War II, the Korean War, Vietnam War, and more recent wars — who will be buried at veterans cemeteries in Riverside or San Diego, instead of close to home and family, here in Orange County.

To further confuse the issue, in a year-end political maneuver engineered by Orange County Supervisor Todd Spitzer — now the new District Attorney — the Board of Supervisors adopted a resolution to put the Veterans Cemetery on County land in Anaheim Hills, alongside the 91 Freeway.

Why are all these alternatives to the original Great Park Veterans Cemetery site coming forward at this time?  Because developer FivePoint desperately covets the original, City-owned 125-acre Great Park site that will produce hundreds of millions of dollars in windfall profits for FivePoint investors — if only they can get hold of that land for their own development purposes.

It’s long past time for the Irvine City Council and politicians across Orange County to stop this nonsense and do the right thing:  Grow a backbone!  Stand up to developer FivePoint and start building the Veterans Cemetery where it belongs — at the original, planned-and-approved Great Park site.  Failing that, veterans, their families, and residents in Irvine and all across Orange County may again have no choice but to take things into their own hands, just as they did with last year’s referendum on Measure B.