The Great Park Veterans Cemetery — Serve the People, Not the Developers!

American Democracy is founded on the hope and belief that our elected officials will stay true to their promises to serve the people, and not powerful special interests.  President Abraham Lincoln’s words at Gettysburg ring truer today than ever:  Our government — at all levels — must be “of the people, by the people, for the people.”

Serving the People of Irvine

Here in Irvine, when we elect the Mayor and four Councilmembers, we expect our five-member City Council to serve the people of Irvine, not multi-billion-dollar developers.  And because Irvine’s Mayor and City Councilmembers constitute the five-member Board of Directors of the City-owned Great Park Corporation, they are also duty-bound to serve the people of Irvine in our shared mission to build and operate our 1,300-acre Great Park for the benefit of the people.

This includes maintaining fidelity to the Great Park Master Plan and the City’s promised dedication of a 125-acre site in the Great Park to begin construction of a State and Federally-approved Veterans Memorial Park and Cemetery.

But on June 6th, at a hastily called “special” meeting of the City Council, Mayor Donald Wagner and Councilmembers Christina Shea and Melissa Fox put the City and our Great Park on a radically different course.  They took the first step to actually give away the 125-acre Great Park Veterans Cemetery site to mega-developer FivePoint, so FivePoint can reap hundreds of millions of dollars in windfall profits by quickly developing office, commercial, and perhaps thousands of residential units on the site.

In return, FivePoint proposes to “swap” land to put a Veterans Cemetery alongside the freeways at the junction of the I-5 and I-405 — on land that is clearly less suitable and less valuable, far removed from the Great Park.  So, who is the big “winner” in this?  Appraisals of the two sites will tell the final story, but pretty clearly FivePoint will be “swapping” freeway-adjacent land worth maybe $2 million per acre for 125 acres in the Great Park worth as much as $6 million per acre.  By my calculation, the windfall profit to FivePoint pencils out to about $500 million — that’s $500,000,000!

Mayor Wagner admitted as much at the June 6th hearing when he said, “FivePoint is going to make some money off of this.  Yep.  Yep.”  Then, he added, “I wouldn’t expect them to be doing it otherwise.  So what!  Here in Irvine we actually encourage our businesses to make money.”

Look, Mr. Mayor:  I know you are proud to declare yourself a “pro-business” Republican.  But since when in Irvine do we rush to enormously enrich FivePoint and other developers by giving away our valuable public parkland and doing away with the Great Park’s most important and most inspiring major feature — the Veterans Memorial Park and Cemetery? 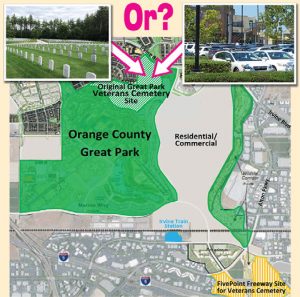 And Who Are the Losers?

If FivePoint is the big winner, who are the losers?  Clearly, if this deal is allowed to go through, the people of Irvine — especially the residents of north Irvine who live in Woodbury, Stonegate, Portola Springs, Beacon Park and Pavilion Park — will be the losers.  Instead of a beautiful and serene Veterans Memorial Park and Cemetery within the Great Park, they will be saddled with a massive, mixed-use development project, generating an estimated 10,000 to 20,000 daily auto trips that further clog the already traffic-choked Irvine Boulevard and other major arterials throughout north Irvine.

Also losing out, of course, will be the veterans and their families whose long-promised Veterans Cemetery in the Great Park will be shunted off to a less desirable freeway site.  Moreover, it will take years to gain all approvals necessary to even begin construction at the freeway site.

The shame of all this is that on June 6th  — when Wagner, Shea and Fox held their hurry-up “special” Council meeting to abruptly change course, the Great Park Veterans Cemetery project had already received all the required City, State and Federal approvals.  In fact, the City was just 9 days away from receiving a $30 million State Budget appropriation to immediately begin construction of the Great Park Veterans Memorial Park and Cemetery, expected to be operational in 2019.

If the City Council had simply stayed on course, bulldozers would be at the Great Park today, demolishing a number of old military buildings and preparing the site for first-phase construction of the Veterans Cemetery.  Instead, Wagner, Shea and Fox are expected to push ahead with the unpopular land-swap — directing City staff and the Planning Commission to “do the deal” with FivePoint and quickly come back to the City Council for final approval.

Over the years, I’ve learned that it’s important not to give up on a good idea.  And the Veterans Memorial Park and Cemetery in the Great Park is a very good idea.  Stay tuned.  Stay involved.