Will Irvine Voters “Just Say NO!” To More Development & Traffic?

Council Votes to Replace Veterans Cemetery in the Great Park, but…

Will Irvine Voters “Just Say NO!” To More Development & Traffic?

Irvine Blvd. now, without the additional FivePoint development approved by the City Council

Great Park Veterans Cemetery or office/commercial development, instead?  The City Council voted (3-to-2) last fall to replace the planned 125-acre Veterans Cemetery in the Great Park with developer FivePoint’s plan for 812,000 square feet of office and commercial development.  The unpopular Council decision — now challenged by a 2018 ballot referendum — would bring nearly 10,000 more auto and truck trips every day to neighborhoods along Irvine Blvd. (above), Sand Canyon, Jeffrey and throughout Irvine.

On October 13th, the day he launched  his Irvine citizens’ referendum to Save the Veterans Cemetery in the Great Park, longtime Irvine resident Ed Pope, a U.S. Army veteran and retired high-school teacher, said he was confident voters would sign the Petition to show their support for veterans and their families.  “Sure enough, they did,” he said.  “In fact, hundreds were signing the Petition every day in solidarity with veterans.” 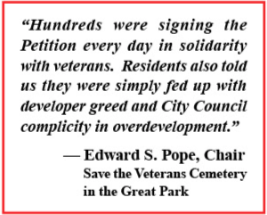 But Pope and his dozens of volunteers quickly learned that Irvine residents were signing the Referendum Petition for other reasons as well:  “Residents told us they were simply fed up with developer greed and City Council complicity in overdevelopment.”  According to Pope, “They were telling us that they were disgusted that three City Councilmembers — Mayor Donald Wagner and Councilmembers Christina Shea and Melissa Fox — were essentially giving away the Veterans Cemetery site in the Great Park to multi-billion-dollar developer FivePoint, along with zoning for office, retail, and commercial development that would generate hundreds of millions of dollars in quick profits for FivePoint, and nothing but traffic, traffic, and more traffic for the rest of us.”

Save the Veterans Cemetery in the Great Park

How much added traffic?  According to a former City of Irvine traffic expert, “125 acres of office and commercial development in the Great Park will generate about 10,000 average daily auto and truck trips — mostly along Irvine Boulevard, Sand Canyon, and Jeffrey.  The expert, now in the private sector, added:  “Compare that with the low-intensity, low-impact of a Veterans Memorial Park and Cemetery, which is mostly beautiful open space that attracts just a few hundred automobiles each day for memorial services and visitations — and rarely during rush hours.”

Pope noted that by the time the historic 28-day Referendum Petition drive ended on November 9th, a record-breaking 19,125 Irvine resident signatures had been gathered, apparently far more than the 12,000 verified Irvine registered voter signatures needed to qualify the Referendum for the 2018 ballot.

According to Pope, many thousands of signatures came from residents in north Irvine villages and neighborhoods along roads that are already traffic-clogged, like Irvine Boulevard, Sand Canyon, and Jeffrey.  “Residents from Portola Springs, Stonegate, Woodbury, Cypress Village, and Northwood were lining-up to sign-up.  They were joined by residents from FivePoint’s Great Park Neighborhoods — Beacon Park, Pavilion Park, and Parasol Park,” he said.  Then, Pope added, “These are folks, many from veterans’ families, who reported they were enthusiastic and eager to see the promised and planned Veterans Cemetery in the Great Park built as soon as possible.  Now, FivePoint wants to snatch it away from them, and replace it with huge development and a never-ending traffic nightmare. Irvine residents are angry at FivePoint, and perhaps even more angry at the City Council.”

Much of the Council-directed anger is focused on City Councilmember Melissa Fox, who was elected in November of 2016.  In her Council campaign, Fox had repeatedly pledged to be a worthy successor to retiring Councilmember Beth Krom, who had been a stalwart supporter of the Veterans Cemetery in the Great Park, along with remaining Councilmembers Lynn Schott and Jeff Lalloway.

Just a few months after being sworn in, Fox shocked her supporters when she “flipped” her vote, and sided with Mayor Donald Wagner and Councilmember Christina Shea.  The two have been reliable votes — some call them “bought-and-paid-for” cheerleaders — for developer FivePoint on all major issues, including the zone-change ordinance to replace the Veterans Cemetery in the Great Park with FivePoint office and commercial development.  Wagner and Shea were the beneficiaries of record-breaking campaign expenditures on their behalf in 2016 — reportedly, organized and spent in the amount of $1.5 million — by FivePoint political operatives.

Fox and other Councilmembers have yet another chance to weigh-in on the Veterans Cemetery issue.  Upon formal certification by the Orange County Registrar of Voters that the Referendum Petition has qualified for the ballot, the certification is forwarded to the City Clerk and City Council for consideration at the next regularly scheduled Council meeting —  January 9th.  There, the Council has three options:  First, the Council can reconsider and repeal its previous, unpopular action in support of the FivePoint zone-change and development scheme; or, second, the Council can honor the Referendum Petition and put its plan to replace and rezone the Veterans Cemetery in the Great Park on the City’s November 2018 election ballot, giving Irvine voters the opportunity to vote NO on the replace-and-rezone plan.  Or, third, the Council can call an earlier special election, perhaps in April or June, for the voters to decide — although this would entail City costs of up to $300,000, and would likely have only half the turnout of the regularly scheduled City election in November.

Says Pope, “A lot of people would be saved a lot of time, money and trouble if the Mayor and City Council just recognized how unpopular the FivePoint replace-and-rezone development scheme really is.  If Wagner, Shea and Fox recognized their mistake, they could simply join with Councilmembers Lalloway and Schott in a motion to repeal the replace-and-rezone plan.  Then, we could get on with the business of immediately building the Veterans Cemetery in the Great Park, as promised and planned.” 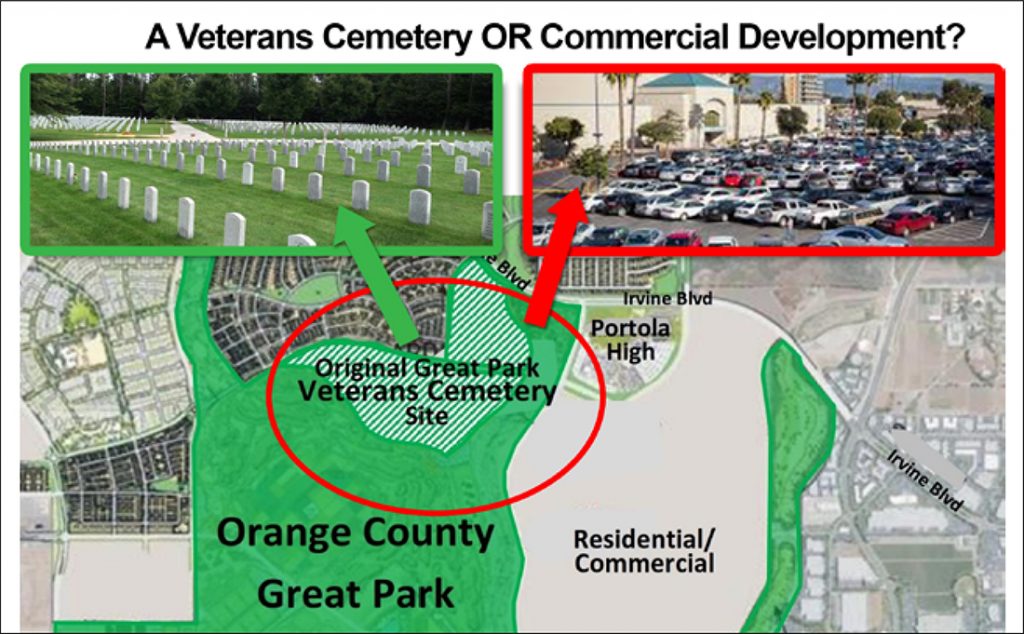 The original Veterans Cemetery site, which has been approved by the City, State, and Federal governments, is pictured here in diagonally-hatched, light-green, as part of the Great Park, adjacent to Irvine Boulevard.  The FivePoint plan, approved on a 3-to-2 City Council vote, is to replace the Veterans Cemetery with 812,000 square feet of office and commercial development, bringing 10,000 more cars and trucks to Irvine Blvd. and other streets every day.

For ICNV updates on the Referendum and other Irvine news …