Who is Paying for the Wagner, Kuo, O’Malley Campaigns? 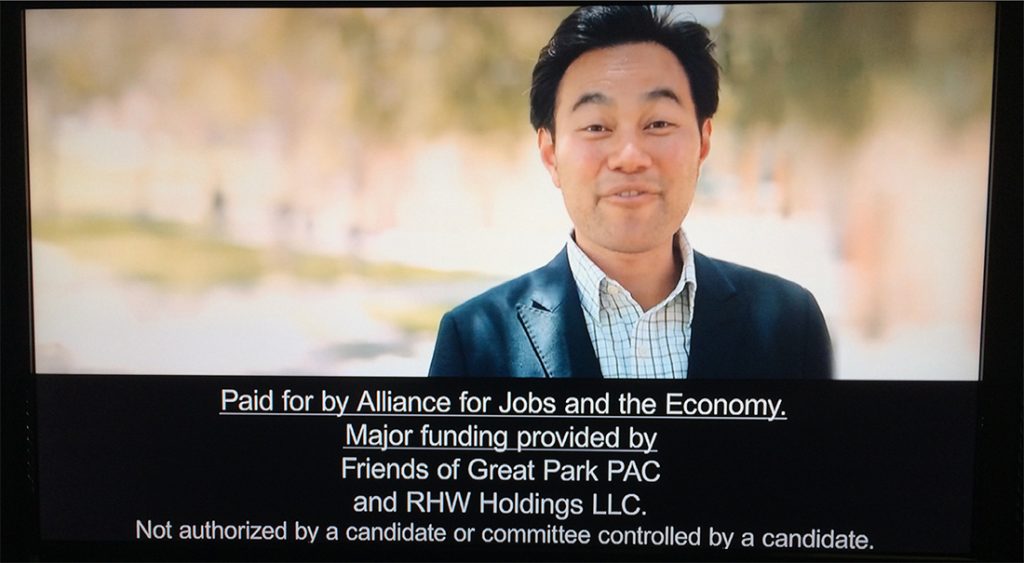 Screen shot of an expensive TV video ad for Anthony Kuo. Note that the ad is not paid for by Kuo or his campaign committee. Instead, this ad is paid for by a number of committees created as conduits for funding that originates with FivePoint and other developers.

This election cycle, a total of 16 candidates are seeking public office in the Nov. 6th City of Irvine election.  There are four candidates for Mayor and 12 candidates for two open City Council seats.

Most of the candidates running appear to be people of good character who are sincerely committed to public service. Judging by the way they are conducting and financing their campaigns, however, a few have made it clear that they are more interested in serving their own political interests by serving powerful special interests — especially the developers who are funding their campaigns.

Wagner, Kuo and O’Malley are now running as a team — and all three are getting huge help from developer FivePoint.  You’ve probably seen much of it in your mailbox and on TV — big, expensive, slick mailers and fancy TV ads costing more than $100,000 per week.

Instead of candidates paying for all this themselves — through their own campaign committees and donors — most of the slick mailers and TV ads are paid for by any number of out-of-town political action committees and so-called “independent expenditure committees” that are FivePoint’s favorite conduits for many hundreds of thousands of dollars.

In a sense, Wagner, Kuo and O’Malley have outsourced their entire campaigns to developer FivePoint.  And FivePoint, in turn, knows they can count on Wagner, Kuo and O’Malley to say “yes, yes, yes” to FivePoint — giving them whatever approvals they ask for.  That’s exactly what Anthony Kuo has been doing for years as a City Planning Commissioner.  And it’s what Carrie O’Malley has been doing as a City Transportation Commissioner as well.

Wagner, Kuo and O’Malley are now all three running campaign ads (paid for by big developers) saying they’ll “fix traffic” if they are elected.  What they are hoping Irvine voters forget is the fact that they’ve been in charge of planning and transportation decisions for years…and traffic in Irvine is worse than ever!

With this kind of institutional corruption, is there any doubt why overdevelopment and horrendous traffic have replaced good planning in Irvine?

What can you do about it?  Vote Nov. 6th.  And be sure to encourage your friends and neighbors to vote, too!