On Friday, February 24th, it happened again.  More than 200 people gathered outside the Irvine office of U.S. Congresswoman Mimi Walters. This was one of many gatherings that have been organized by residents of the 45th Congressional District, who are unhappy about the policy pronouncements of President Donald Trump.

At this workday gathering — just like in prior weeks — the Congresswoman’s office door was closed and locked. The constituents were now left to express their unhappiness with Walters, which they did by chanting “Where’s Mimi?” and “Do your job!”

Since the inauguration of President Trump, groups of varying sizes have visited Mimi Walters’ office, trying to speak with the Congresswoman.  When groups of two or three people, or even five or six have gone to her office, Walters’ staff greeted them and listened to their concerns, assuring them that their views would be conveyed to the Congresswoman. But as the groups started to get bigger — 10 to 20 people, then 40 or 50 — repeatedly asking to meet directly with Congresswoman Walters, her staff began locking their doors and simply refusing to meet with constituents at all. This, in turn, has led her constituents to leave improvised post-its and personal notes taped to the door of the Congresswoman’s office. 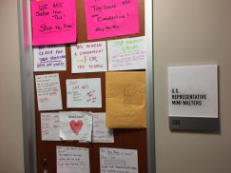 Here’s a lesson from Civics 101: Constituents should be able to meet with their elected Member of Congress to voice their views on important public issues. And we expect our elected representatives to listen to our concerns. They don’t have to agree with us, but they do have to listen. That’s how representative democracy is supposed to work.

According to a report in the Orange County Register, Congresswoman Walters’ staff complained that some of the visitors to the Congresswoman’s office have been “paid protesters.” This is nonsense.

I have personally spoken with dozens of “protesters” and confirmed, first-hand, that they are genuinely concerned constituents. They are voters in the 45th Congressional District, and they’re not paid at all. In fact, many take off from work, at considerable personal cost, to speak-up as citizens.

Gail Lewis, a 30-year resident of Irvine’s Turtle Rock neighborhood, attended the protest, unpaid of course, saying she was surprised at how many other Irvine residents were in attendance. “Sometimes I feel like I am the only one having these horrible thoughts about what is happening to the country that I know and love. But then,” said Lewis, “I attend a rally and realize I am not alone. It’s energizing to see that so many people are concerned.”

The scores of people who gather outside Walters’ office are united in their request that Congresswoman Mimi Walters participate in a public town hall meeting, a venue where there can be an honest back-and-forth conversation about the direction and future of the country. It doesn’t seem like much to ask for, does it?

As a citizen and a journalist, let me plainly state my own view, which echoes popular opinion in the 45th Congressional District: Congresswoman Walters, meet with your constituents! Hold a town hall meeting! Do your job!

The 45th Congressional District includes all of Irvine, Orange, Mission Viejo, Lake Forest, Laguna Hills, Rancho Santa Margarita, and parts of Tustin, Villa Park, and Anaheim Hills.  Congresswoman Mimi Walters was first elected to the U.S. Congress in 2014, re-elected in 2016, and is expected to run for re-election yet again in 2018.

(Video below of protesters outside Mimi Walters Office, click to view, 33 seconds in length)