SECTION 1. Section 1411 is added to the Military and Veterans Code:
The department [CalVet] shall work with local government entities in the County of Orange to develop the state-owned and state-operated Southern California Veterans Cemetery consistent with the enacted laws and ordinances of the City of Irvine.

The precise language of the bill is critical because last year (May 12, 2020), the Irvine City Council adopted the Build the Great Park Veterans Cemetery Initiative (signed by 19,790 Irvine residents) that made the ARDA site the only legally available property in the City of Irvine to build a Veterans Memorial Park & Cemetery.

Mayor Farrah Khan and Councilmembers Anthony Kuo and Mike Carroll all voted in favor of adopting the initiative as a City Ordinance. However, since their vote last year, these three Councilmembers have refused to move forward with the project.

This year, Khan, Kuo, and Carroll have publicly stated that they are in favor of the Council waiting for a $700,000 CalVet study to be completed (comparing the ARDA site to another piece of property in Irvine) before making a decision as to which site the City will transfer to the State — ignoring the fact that it was their vote last year that changed City law, making the ARDA site the only legally available location.

Frustrated by the Council’s inaction, Councilman Larry Agran has written a Resolution that, if passed, would instruct the City to begin work demolishing old buildings, cleaning up and clearing the entire ARDA site, preserving historic features, and building a perimeter park that includes trees, trails, and memorial gardens for residents to enjoy. 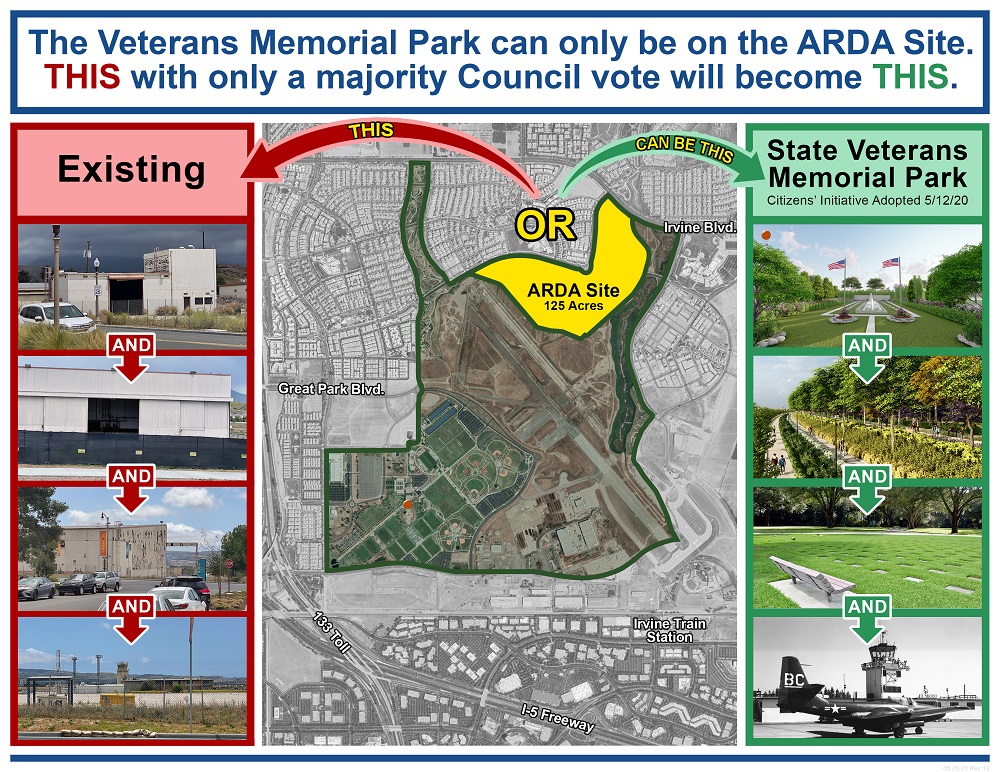 So far, no other Councilmember has agreed to even put Agran’s Resolution on the agenda for public discussion.

It seems that building a perimeter park on the ARDA site would be an easy and popular decision for the Council to make. Right now, the City-owned ARDA site is an eyesore (as shown in the photo above). The perimeter park, which could be built quickly, would provide Great Park residents with a beautiful, nearby amenity that would enhance their quality of life … and their property values.

The unanswered question is this: What is the City Council waiting for?