Here at Irvine Community News & Views, we take local elections very seriously!  As an experienced elections attorney, in the 1970s and 1980s, I was a member and Chairman of the Illinois State Board of Elections, charged with administering and enforcing campaign finance and election laws.  I understand the importance of an informed electorate, which is one of the reasons why I started this publication.  The mission of this paper is to both report the news in Irvine and to fearlessly take a stand regarding causes, candidates and elections important to the future of our City.

It’s election season right now in Irvine and all across America…and you know what that means: Your mailbox is likely to be full of political campaign mailers.  Some of the mailers will be positive, coming from legitimate campaign committees.  But more and more of the political mail you receive will be negative, so-called “hit pieces” that come from groups and committees you never heard of, targeting certain candidates with a calculated campaign of lies, smears, and character assassination.  Welcome to the world of “dark money” and vicious politics.

Below are some questions and answers to help you understand:

Question: How is it that certain Mayor and Irvine City Council candidates fund $300,000 or $400,000 campaigns promoting themselves and viciously attacking their opponents, when they have only managed to raise $25,000 or $35,000?

Answer: The answer is “dark money.”  Here’s how the deal works in Irvine: Developer-friendly candidates let it be known that they sure would appreciate some “outside help” for their campaigns to evade Irvine’s campaign contribution limits.  With a wink-and-a-nod, certain developers and their allies oblige by donating hundreds of thousands of dollars through layers and layers of political action committees that then spend the money promoting pro-developer candidates — and viciously attacking their opponents in the mail, on TV and online.

Question: Why is it called “dark money?”

Answer: It’s called “dark money” because it’s very difficult to trace where it’s coming from, especially in the middle of a campaign.  And it’s hidden behind nice-sounding committee names like Friends of the Great Park or California Homeowners Association or Orange County Freedom Fund.  But make no mistake about it, the dark money in Irvine originates mainly from big developers and big corporations that, of course, expect to be rewarded for their “help” when they put their multi-million-dollar projects in front of grateful Councilmembers who got elected because of the huge dark-money expenditures.

Here is an example of “dark money.”  Former Mayor and current Council candidate, Larry Agran is disliked by corporate land developers because he spent 20+ years standing up to them.  So, the Irvine Company donated $45,000 to the Build Jobs PAC, which in turn donated $30,000 to the California Taxpayer Protection Committee.  That money was spent in a hit piece against Agran that came out this past weekend, filled with outrageous lies and attempts at character assassination. 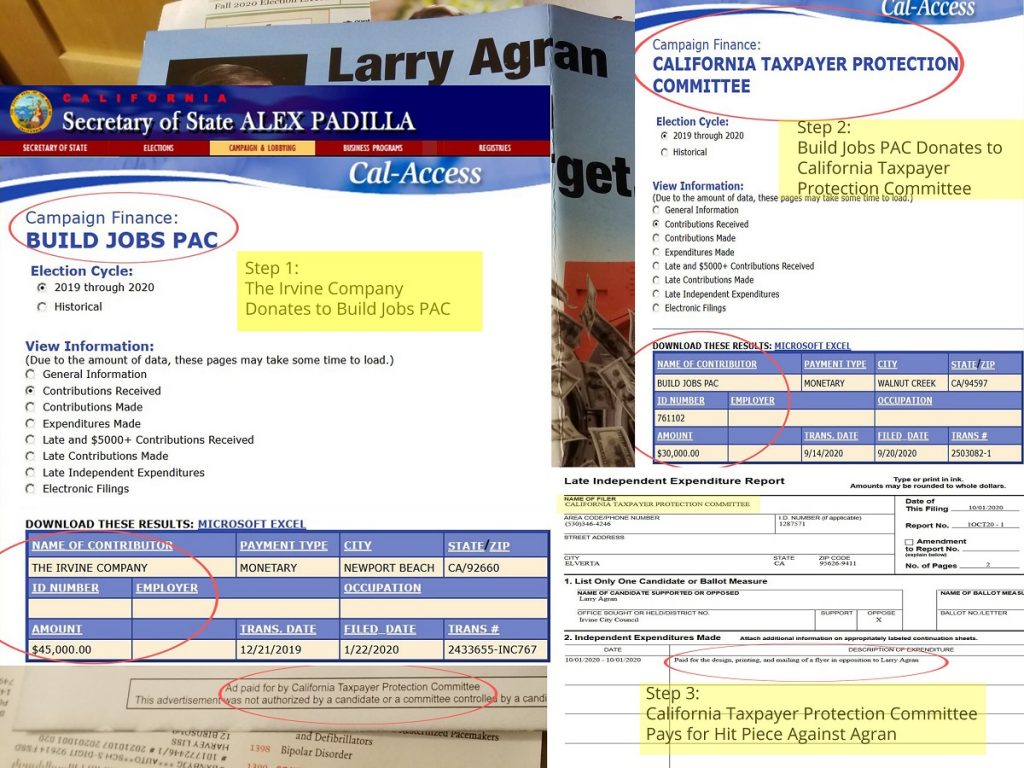 Another nice-sounding organization — Greater Irvine Education Guide — is also part of a “dark money” PAC to get pro-developer candidates elected.  In one filing alone, this PAC has taken more than $130,000 from the Building Industry Association of Southern California PAC, the National Association of Industrial & Office Properties PAC, and the California Taxpayer Coalition.  Those are all PACs that have been set up to help elect candidates who will rubber-stamp massive development projects.  And, just as you would imagine, the Greater Irvine Education Guide has already begun releasing hit pieces against Agran. 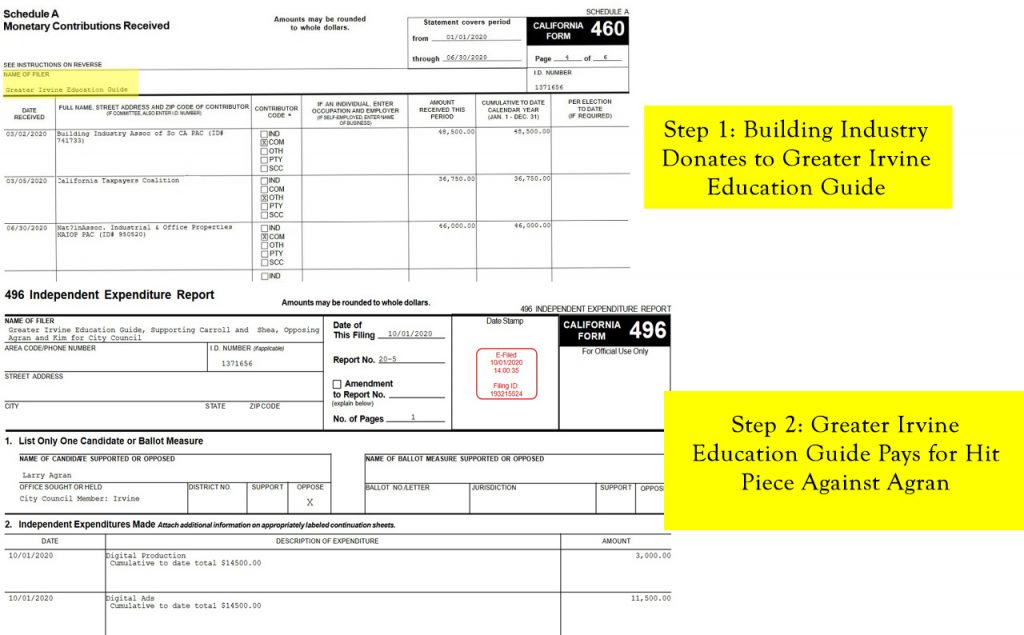 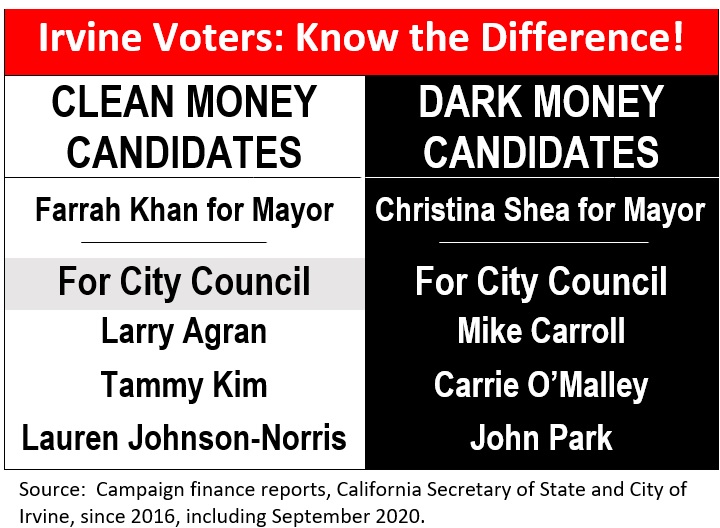