Veterans Corner: The Mayor & Council Should Respect the Will of the People!

As a retired social studies teacher, I understand the importance of history and the role it plays in determining our future. 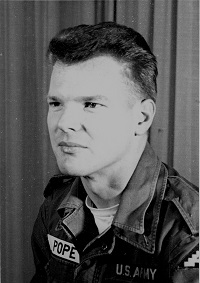 My name is Ed Pope. I am a U.S. Army veteran and a 50-year Irvine resident who has been working to preserve and honor our City’s history with the old El Toro Marine Corps Air Station — which is now the Great Park.

My involvement began in the late 1990s when I joined forces with then-Councilman and later Irvine Mayor Larry Agran, to help save the Marine base from being turned into a huge international airport, which would have been a disaster for Irvine residents. It took nearly a decade and four County-wide initiatives, voted on by the people, but in the end our community won that battle!

In 2014, I partnered with Larry Agran again to designate a 125-acre section of the 4,700-acre former base, for preservation and construction of a Veterans Memorial Park & Cemetery. The designed site — referred to as the “ARDA site” — is especially meaningful to veterans because it includes the runway, control tower and hangars that were constructed when the base first became operational in 1943 during World War II. 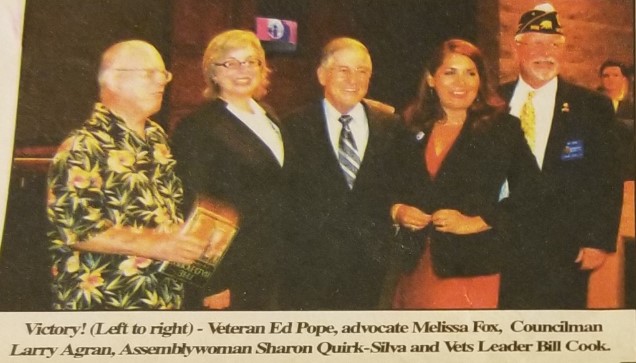 At the July 22, 2014 City Council meeting, Larry’s motion to transfer the ARDA site to the State for a State Veterans Memorial Park & Cemetery was passed unanimously. There was no controversy about that vote … only broad and enthusiastic support from the community.

Unfortunately, land developer FivePoint realized they could make a lot of money from the ARDA site, if only they could gain control of the property for their own huge profit. By 2017, the developer had created a scheme with three members of the Irvine City Council. The historic ARDA site would be plowed over for massive commercial development by FivePoint. And, the proposed Veterans Cemetery would be shoved alongside one of the noisiest and most congested freeway interchanges in California, the El Toro Y.

Once again, the community pulled together! I led the all-volunteer group that gathered 19,140 resident signatures to make sure that Irvine voters were able to weigh-in on FivePoint’s scheme. Despite FivePoint spending more than a million dollars, Irvine voters overwhelmingly said NO! (On June 5, 2018, FivePoint’s scheme was defeated 63% to 37%, with 91% of Irvine precincts voting NO!)

After the Council majority brazenly ignored the election results, our all-volunteer team secured another 19,790 signatures for a citizens’ initiative that zoned the ARDA site exclusively as a Veterans Memorial Park & Cemetery. The Council was forced to adopt our initiative on May 12, 2020, making it the law in Irvine.

Here we are two years later and Mayor Khan and Councilmembers Kuo, Kim and Carroll continue to ignore the will of the people … and the law.

Even worse, they now want the Veterans Cemetery built alongside the 91 freeway, which is another noisy, polluted, congested freeway — 20 miles away from Irvine! And, instead of supporting Councilman Agran’s plan to build a beautiful park to honor veterans and the history of the property, they want to completely erase the memory of the air station by turning the entire ARDA site into some kind of “botanical garden” that has nothing to do with veterans. (Their botanical garden will include a tiny 5-acre “memorial component.”) Not only is this latest move illegal because it goes against the provisions of the initiative that is now law, it’s a slap in the face to veterans and our families — and our history of service and sacrifice.

I served in Berlin during the most intense moments of the Cold War and saw firsthand what silencing the people in East Berlin looked like. I proudly served my country, knowing that I was doing my part to protect democracy in western Europe and here in the United States. I came to appreciate how important it is for the voices of the people to be heard … and heeded.

When I came home, I spent 35 years teaching my students that your vote is your voice in this country. And that, through the ballot, the will of the people always prevails. Except, it seems, here in Irvine.

Ed Pope
Ed Pope served in the US Army from 1961 to 1963. Ed was stationed in Germany during the height of the Berlin crisis, which led to the building of the Berlin Wall. Part of Ed’s military duties included teaching medical mobilization procedures to military personnel. His love of teaching continued after he left the service. Ed taught social studies for 35 years at Marina High School in Huntington Beach. He received the "Orange County Teacher of the Year" award in 1984. Ed lives with his wife, Toni, in the same Turtle Rock home he bought 50 years ago.