Fox switches sides to team-up with Wagner and Shea in taking last-minute action to halt funding and construction of the Veterans Cemetery, while approving a “giveaway” of the 125-acre Great Park site to FivePoint for massive commercial and residential development.

Since 2013, City leaders — both on the City Council and off — doggedly pursued the dream of creating a 125-acre state-funded and state-maintained Veterans Memorial Park and Cemetery in the Great Park.

Flash forward from 2013 to early June, 2017.  The City had secured all necessary State and Federal approvals for the Veterans Cemetery.  And the Legislature and Governor had just put a $30 million special funding appropriation in the pending 2017-2018 State Budget to begin immediate construction of the long-awaited Veterans Cemetery in the Great Park.

Under these circumstances, the two regularly scheduled June meetings of the Irvine City Council should have been joyous occasions, with items on the business agenda celebrating the City’s success in finally turning the dream into an on-the-ground reality — the Veterans Memorial Park and Cemetery in the Great Park that would now be built and operational within two years.

But, in a surprise move, Irvine Mayor Donald Wagner and Councilmember Melissa Fox sent a joint memo to the City Manager and City Council calling for an urgent “special meeting” of the Council for the sole purpose of telling the State that the City was abandoning the project to put the Veterans Cemetery in the Great Park.  Wagner and Fox, instead, urged adoption of an emergency resolution of intent — to reject the $30 million in State funding and pursue a complicated “land-swap” with developer FivePoint Communities to re-locate the Veterans Cemetery miles away from the Great Park, on FivePoint property alongside the freeway where the I-5 and I-405 converge at the El Toro “Y.”

With just 24-hours notice, the June 6th afternoon “special meeting” of the Irvine City Council nevertheless attracted a full house, with 100 – 150 Irvine residents on hand.  Most were there to protest the FivePoint land-swap.

Turtle Rock resident and business attorney, Rick Baran, warned that abandoning the Great Park Veterans Cemetery project in favor of the FivePoint freeway site would, realistically, “move the timeline for a working Cemetery backwards at least two to three years.”

Dr. Harvey Liss, a licensed civil engineer and 41-year Irvine resident, underscored the same point by noting that the Irvine City staff had reported that site cleanup and construction of the Veterans Cemetery in the Great Park could, with Council approval, “start immediately.” He said, “What can possibly be quicker than starting immediately?”

Speaking directly to Fox, who had previously championed and campaigned for the Veterans Cemetery in the Great Park, Dr. Liss added: “You’ve betrayed us. Thousands of voters…you’ve betrayed us.  How can you do that?”  Then, apparently referring to estimates that the “land-swap” favored by Wagner, Fox and Shea will net FivePoint an estimated $500 million in quick profits, he added, “FivePoint Communities represents profits and only profits.  They have no other interest.” 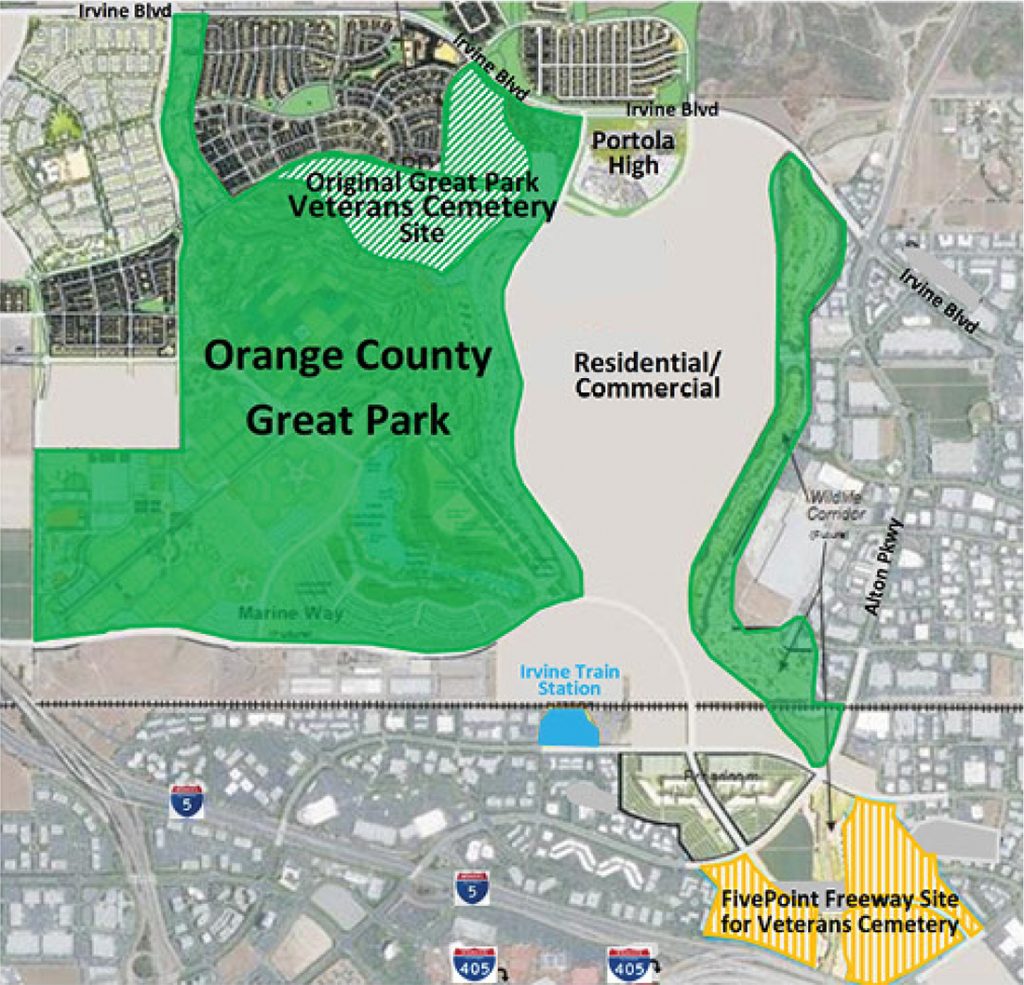 The original Veterans Cemetery, which has been approved by the City, State, and Federal governments, is pictured here in diagonally-hatched, light-green, as part of the Great Park.  The FivePoint land-swap property is pictured here (lower right corner) as the vertically-hatched, orange site near the convergence of the I-5 and I-405 freeways, known as the El Toro “Y.”

A number of speakers recalled that developer FivePoint had organized and spent an astounding $1.5 million to elect Wagner as Mayor and re-elect Christina Shea to the City Council in November, 2016.  Apparently directing her remarks to Melissa Fox, Irvine resident Jean Miller said a vote for the FivePoint land-swap “will designate Irvine as a company town … a betrayal that carries an unending shame.”

Mayor and Councilmembers Have the Last Word

Seeking to defend himself, as well as Fox, Shea and FivePoint, Mayor Wagner said, “FivePoint is going to make some money off of this. Yep.  Yep.  Probably.  I wouldn’t expect them to be doing it otherwise. So what!  Here in Irvine we actually encourage our businesses to make money.”

But, at whose expense?  In several rounds of Council comments, Councilmembers Jeff Lalloway and Lynn Schott spoke against the land-swap favored by Wagner, Fox, and Shea. Schott said, “We’re stewards of the land in the Great Park.”  Referring to the Veterans Cemetery in the Great Park as “hallowed ground” and “a wonderful centerpiece of our Great Park,” she added, “We’re seeing the giveaway of our Great Park.  I, for one, do not want to facilitate that.”

Councilmembers Jeff Lalloway and Lynn Schott opposed the FivePoint land-swap — warning it would delay the Veterans Cemetery indefinitely, and result in the permanent giveaway of 125 acres of the Great Park to FivePoint, bringing massive office, commercial, and residential development…and traffic congestion.

Councilmember Jeff Lalloway repeatedly decried the rush to embrace a land-swap — calling it “the biggest land transaction in City history” — with no appraisals, no environmental studies, and no staff analysis of the impacts that FivePoint commercial development of the 125-acre Great Park property would bring to north Irvine, including an estimated additional 10,000 cars per day on Irvine Boulevard, Sand Canyon, and Trabuco.

Four hours after the meeting began, it ended abruptly —with a 3-to-2 vote for the Wagner-Fox-Shea land-swap resolution.

Pushed by FivePoint and the Wagner-Fox-Shea majority, the City Manager and City Attorney followed up the June 6th meeting with a memo laying out a 90-day schedule for the City to surrender ownership of the 125-acre Great Park site to FivePoint, along with a grant of zoning for FivePoint to commence intensive office, commercial, and residential development on the property.

The fast-track land-swap — unprecedented for a project of this magnitude — doesn’t appear to allow time for “due diligence,” including careful analysis of independent property appraisals, environmental studies, testing for toxics, and public participation in the process.

According to one City Hall staffer close to the project, “At this point, City staff is basically working not for the public but for FivePoint, rushing through the biggest land giveaway in Irvine history.”  Another City Hall source, speaking on condition of anonymity, put it this way: “I hate to admit it, but from the Council on down, we’ve become lapdogs for FivePoint, not watchdogs for the public.”

While the land-swap is being rushed along, and may be approved by the Council as soon as September, according to Irvine planners, the path forward for the Veterans Cemetery at the FivePoint freeway site will be “slow-walked” — likely taking years for planning, design, environmental studies, and all the necessary approvals by City, State and Federal officials before construction can begin.