Congratulations to UCI on an Amazing Season! 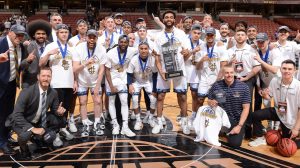 In the biggest upset of the NCAA “March Madness” Basketball Tournament thus far, the 13th-seed UCI Anteaters took down 4th-seed Kansas State in their thrilling first round game on Friday, March 22nd.  Too bad the magic couldn’t quite last for the whole weekend.

On Sunday (March 24th), the Anteaters played in round two, taking on the 12th-seed Oregon Ducks of the Pac 12 Conference.  After a lackluster first half, when the entire team struggled on both offense and defense, the Anteaters emerged from half-time, erasing a 12-point deficit in a matter of minutes to capture the lead.  Unfortunately, the Ducks caught fire, managing to recapture the lead, holding and extending it through the end of the game. The final score was 73-54.

Although they couldn’t quite pull off another upset, the Anteaters played their hearts out, showing flashes of the same grit and resilience that carried them to a regular season record of 30-5.

UCI and the entire Irvine community can be proud of the Anteaters’ thrilling season that extended right into March Madness.

Congratulations on a great season!

On March 17th, the UCI Anteaters won the Best West Conference Tournament, earning a spot in the NCAA March Madness Tournament for only the second time in school history.

The Anteaters previously qualified for the tournament in 2015, falling in their first round game to college basketball powerhouse Louisville.

UCI handily defeated Cal State Fullerton 92-64 in the Big West final, pushing their winning streak to an impressive 16 games in a row. It also gave the Anteaters their 30th win of the season, something only three other Division I schools have accomplished this season.

This year, UCI was given the 13th seed in the South region of the March Madness bracket.

“With a 15-1 regular season record and an impressive showing at the Big West Men’s Basketball Tournament, the Anteaters proved they were the best team in the Big West this season.  The entire Big West is now Anteater fans and wish Coach Russell Turner’s team great success in San Jose and beyond.”