There are two very different campaigns in Irvine’s Mayoral race. 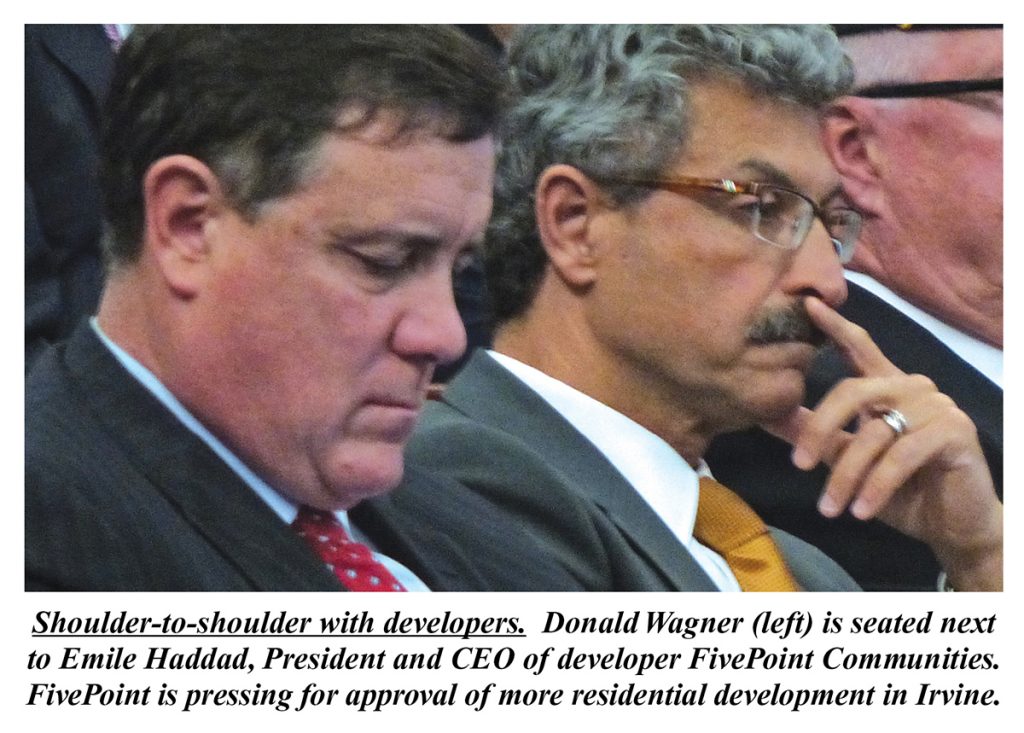 Most analysts seem to agree that termed-out Republican State Assemblyman Donald Wagner — now running for Mayor of Irvine — has little to show for his six years in the Legislature.  According to sources in the State Capitol, Wagner spent his years in Sacramento mostly warming a seat and collecting a $10,000 monthly paycheck for simply voting NO on just about everything: the budget, health care, education, roads and infrastructure, environmental protection, and gun safety.

In fact, some of Wagner’s Orange County constituents regarded his performance in Sacramento as so lackluster that they dubbed him “Donald Do-Nothing.”  These same critics — watching Wagner essentially “outsource” his entire campaign for Mayor of Irvine to developer FivePoint Communities — are saying his lazy approach to running for Mayor is yet another example of a “Donald Do-Nothing” effort.

In what some felt was a snub to the Irvine Chinese community, Wagner was a no-show at the October 15th candidate forum held at the Chinese Cultural Center.  And unlike former Councilwoman and current Planning Commissioner Mary Ann Gaido, who is taking her growth-control message to voters everywhere in Irvine — door-to-door, at Starbucks, in front of schools and at shopping centers — Wagner is nowhere to be seen.

What Wagner does have is the knowledge that FivePoint Communities and other developers are spending an astounding $1 million in unlimited “independent expenditures” — better known as “gray money” and “dark money” that is funneled through layers of committees to make its sources hard to trace — all calculated to elect him Mayor and also elect two pro-developer members of the City Council, Christina Shea and Anthony Kuo.

Most of the money so far reported has been spent on anti-Gaido TV attack ads and “hit-mailers.”

Why are they going to all this effort and expense?  FivePoint and other developers have made it clear they are prepared to spend millions to gain more entitlements, and an even faster pace of growth and development in Irvine, regardless of the City’s traffic crisis and other adverse impacts on residents’ quality of life.

Despite Gaido’s vocal opposition, FivePoint has already won Planning Commission and Council approval of 10,000 houses and apartments at the Great Park.  It is an open secret that FivePoint wants to secure approval for yet another 5,000 to 10,000 units, including as many as 2,000 houses on 125 acres of the Great Park previously dedicated for a Veterans Memorial Park and Cemetery.

Gaido, known as the “Guardian of Irvine’s General Plan,” has repeatedly stood up to aggressive, uncontrolled development.  That’s why FivePoint and other developers are working to defeat her on November 8th.

Compared to Wagner’s outsourced, developer-funded campaign, Gaido’s grassroots campaign seems almost quaint — relying on scores of volunteers and raising $100,000 in small donations of no more than $470, as prescribed under City law.  Asked about the disparity, Gaido said, “This election will decide who controls Irvine, profit-driven developers or the residents who live here.  I have faith in Irvine voters.”