It’s no longer the Trump vs. Clinton TV show.  It’s no longer presidential politics as high-ratings entertainment.  Donald J. Trump is, in fact, President of the United States.  This is not a “reality TV” program.  It’s now about real life, real people, and Trump’s real policies and programs that will directly impact everyone in Irvine, some more than others.

There is great doubt and even fear of what a Donald Trump presidency means for America.  But there can be no doubt that Trump’s agenda to “Make America Great Again” includes repeal of the federal Affordable Care Act, better known as Obamacare.  That has been at the very top of the Trump and Republican Party agenda for a long time.

What does it all mean in Irvine?  Virtually every Irvine resident has been affected — most have benefitted — from the phased implementation of the Affordable Care Act, which then-President Barack Obama managed to push through Congress in 2010.  Under Obamacare, more than 20,000 previously uninsured Irvine residents have been able to purchase affordable, quality health insurance through “Covered California,” the health insurance exchange set up under federal and state law.  Thousands of middle-class Irvine households receive tax subsidies to help pay for approved health insurance policies; thousands more have gained coverage under the state MediCal program.

“Repeal of Obamacare, as Trump and congressional Republicans are pledged to do, would be devastating to thousands and thousands of Irvine families,” according to Dr. Phyllis Agran, a UCI Professor and leading Orange County pediatrician.  Dr. Agran added, “Children, especially, would lose out on the expanded coverage that Obamacare has mandated for kids in California — for example, dental health coverage, and coverage for mental health and developmental disabilities.”

There are other popular provisions of the Affordable Care Act at risk.  For example, Obamacare currently requires health insurance companies to cover pre-existing conditions; it eliminates caps on coverage; and it allows children to remain covered under their parents’ policies until age 26.

Repeal of these provisions would wreak havoc on Irvine families.  A father with a young Irvine family put it this way:  “Obamacare enabled our family to get better health insurance coverage, and save $7,000 per year.  Repeal would probably force us to lose our insurance, or have to pay so much more that we’d have to sell our home and move, just to afford private health insurance.”

In fact, abortions represent a tiny fraction of what Planned Parenthood does.  According to Melahat Rafiei, a former Board Member of Planned Parenthood of Orange County and San Bernardino’s Community Action Fund, “The Trump-Ryan Republican war against Planned Parenthood is really part of a broader attack on women’s health.  Irvine women and families served by Planned Parenthood number in the thousands — receiving pap smears, breast examinations, contraception, and pre-natal check ups.  Why in the world would we want to de-fund that?”

Add Irvine immigrants to those in fear of Trump’s presidency.  What do they fear?  They fear presidential executive orders to begin round-ups and mass deportations.

According to the Los Angeles Times, the Trump administration is poised to launch high-profile workplace raids.  Irvine, with thousands of employers and businesses, and a vast immigrant-dependent daily workforce of more than 200,000, is extremely sensitive to attacks on immigrants.

Trump is on record favoring deportation of millions of undocumented Mexican-Americans, Chinese-Americans and others who are undocumented.  In addition, he has called for a ban on Muslims seeking asylum in th 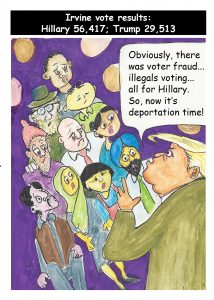 e United States, and has even proposed initiating a “registry” of Muslim-Americans as a means of “fighting terrorism.”

Irvine is now a famously diverse and integrated “majority-minority” City of nearly 300,000 people — people and families of all backgrounds, faiths, and ethnic origins.

A longtime leader in Irvine’s Muslim community, speaking anonymously for fear of reprisal, said, “Irvine’s minority communities — especially Hispanics and immigrants from the Middle East — fear what President Trump may do.  Irvine is a decent and tolerant community.  I hope our local elected officials will do what’s right — speak-up and support and defend those among us who are being targeted for attack.”

Historically, Irvine Mayors and City Councilmembers — most notably former Mayors Larry Agran and Beth Krom — have sent official letters and initiated City Council actions in opposition to federal policies and programs that are harmful to Irvine residents.  But the current City Council political alignment makes it unlikely that the Mayor and City Council will voice opposition to the Trump administration in any way.  Mayor Donald Wagner and three other Councilmembers — Christina Shea, Jeff Lalloway, and Lynn Schott — are highly partisan Republicans, who are apparently committed to supporting President Trump and the Republican Congress.

Take our Poll at: IrvineCommunityNews.org/Take-Our-Poll