With new State funding, the Southern California Veterans Memorial Park and Cemetery at the Great Park could soon be built and operational.

Memorial Day, 2017 will be remembered in Irvine because we once again, as a community, expressed our everlasting gratitude to those hundreds of thousands of men and women — soldiers, sailors, and airmen — who are among the fallen in defense of our nation. But this Memorial Day had special significance for the Irvine community, because we have apparently achieved the final breakthrough — the necessary State funding — in our quest to actually begin building the long-promised, 125-acre Veterans Cemetery in the Great Park.

It has been a long journey.

In 2014, the City Council adopted a resolution pledging to donate to the State up to 125 acres in our 1,300-acre Great Park to establish a State Veterans Cemetery. Just weeks later, the State adopted enabling legislation designating the Great Park site as the location of the future “Southern California Veterans Cemetery” which, once built, would be maintained and operated in perpetuity by the State.

Then, in 2016, the U.S. Department of Veterans Affairs received and approved final State and City plans, and put the Veterans Cemetery on the “priority list,” making it eligible for added Federal funding.

At what proved to be a raucus and confusing April 4, 2017 Irvine City Council meeting, Councilmember Jeff Lalloway sought to advance the Great Park Veterans Cemetery project by proposing that the City allocate up to $40 million from the $250 million Great Park development fund, in order to initiate and accelerate construction of the 125-acre Veterans Cemetery, estimated to cost $77.4 . 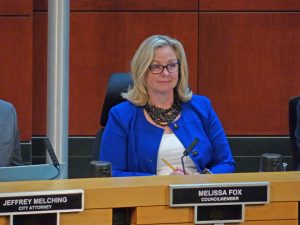 Lalloway’s motion, which passed on a 3-to-2 vote, was then effectively amended by Councilmember Melissa Fox’s motion for reconsideration. Fox, who expressed concern about the one-time development cost of the Veterans Cemetery, ultimately succeeded in amending Lalloway’s motion in three ways:

• First, she limited the City’s contribution from the Great Park development fund to $38 million (instead of Lalloway’s $40 million).

• Second, she insisted that the balance of the funding for the $77.4 million project be identified by June 15, the deadline for adopting the Fiscal Year 2017-18 State budget.

• And, third, Fox’s motion also breathed new life into developer FivePoint Communities’ “land-swap” proposal by directing City staff to look at the details of the developer’s “alternative plan” to move the 125-acre Veterans Cemetery out of the Great Park, locating it instead a couple of miles away on FivePoint-owned property near the Irvine Train Station and the convergence of the I-5 and I-405 Freeways, known as the El Toro “Y.” FivePoint would take ownership of the originally designated 125-acre Veterans Cemetery site in the Great Park, with land-development rights for massive commercial and office construction, and possibly more than 1,000 houses as well. 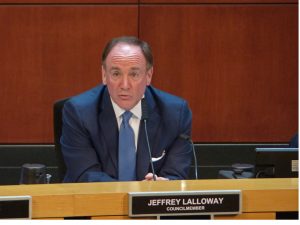 Lalloway questioned Fox’s motion — contending that it could jeopardize State funding for the original Veterans Cemetery site. But, in a startling turn of events just before the Memorial Day weekend, Fox’s motion appears to have actually galvanized support for State funding for the Veterans Cemetery. In a remarkable breakthrough, $30 million has been put into the pending State budget (with an additional $10 million expected in Federal funding), providing the balance of funding necessary to begin construction of the Veterans Cemetery at the originally planned 125-acre site in the Great Park.

What remains, of course, is for the State budget — with the money for the Veterans Cemetery in the Great Park — to be adopted by the Legislature and signed by the Governor by the June 15th deadline. This would presumably be followed by City Council action, now scheduled for June 27th, to decide whether to go ahead with the Veterans Cemetery in the Great Park or, alternatively, to pursue the FivePoint land-swap proposal.

City staff has reported publicly that if the City Council sticks with the original Great Park Veterans Cemetery site, which has all its approvals, the demolition of abandoned military buildings and preliminary site preparation could begin within “a couple of months.” Once begun, construction of the 125-acre Veterans Memorial Park and Cemetery is expected to take two years to complete.