After a rare two-week delay in development, the Irvine City Council got back to business as usual — putting massive development projects into the pipeline, projects that are certain to bring big traffic headaches to residents living anywhere near the intersection of Sand Canyon and the I-5 Freeway.

On a 3-to-2 vote, Mayor Donald Wagner, joined by Councilmembers Jeff Lalloway and Lynn Schott, voted to begin processing an Irvine Company application to build 1,710 apartment units on a 69-acre parcel of land adjacent to the I-5 Freeway at Sand Canyon.  This is an area, in the northern part of Irvine, already jammed with traffic that is exceeding road capacity.  Opposing the project, Irvine resident Steve Parker referred to existing conditions as a “traffic catastrophe.” Another resident, Rebecca Ward, said putting this kind of residential development next to a freeway, with extreme localized air pollution, failed the test of “responsible development.” The apartments would bring an additional 3,400 cars to the area would generate an estimated 14,000 daily rush-hour trips. Councilmembers Christina Shea and Melissa Fox voted NO, urging their colleagues to defer the project while Irvine residents are so upset about out-of-control traffic.

Minutes later, In a second action, the City Council voted unanimously to grant an interim use permit for the construction of a temporary 12,000-seat amphitheater on property owned by developer FivePoint Communities, adjacent to the Great Park. The amphitheater, slated to open at the end of this summer, will attract as many as 4,000 cars for popular live performances. One concert-goer, happy with the Council action, was heard to remark: “The music is going to be great. But the traffic is going to be godawful.” He added that for Irvine residents who live near the Great Park, “it’s going to be a case of Friday Night Traffic Blight!“ 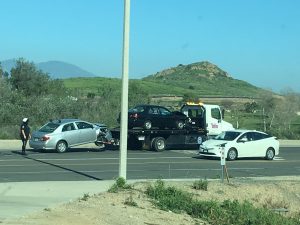 In yet another development project, this one on the other side of town, Concordia University in Turtle Rock village is presenting its facilities expansion project to the Irvine Planning Commission, when the 5-member Commission meets at 5:30 p.m. on Thursday (March 16th) in the City Council Chamber at the Irvine City Hall (corner of Harvard and Alton). Residents in the Concordia area and from throughout Turtle Rock have organized in opposition to the project, pointing to existing traffic dangers on Ridgeline Drive and University Drive that, they say, will only be compounded by thousands more cars at the Concordia campus day-in and day-out. Irvine police records confirm that there have been numerous collisions, including fatalities, in this area in recent years.