The Only Three Candidates Who Were “NO on B”! 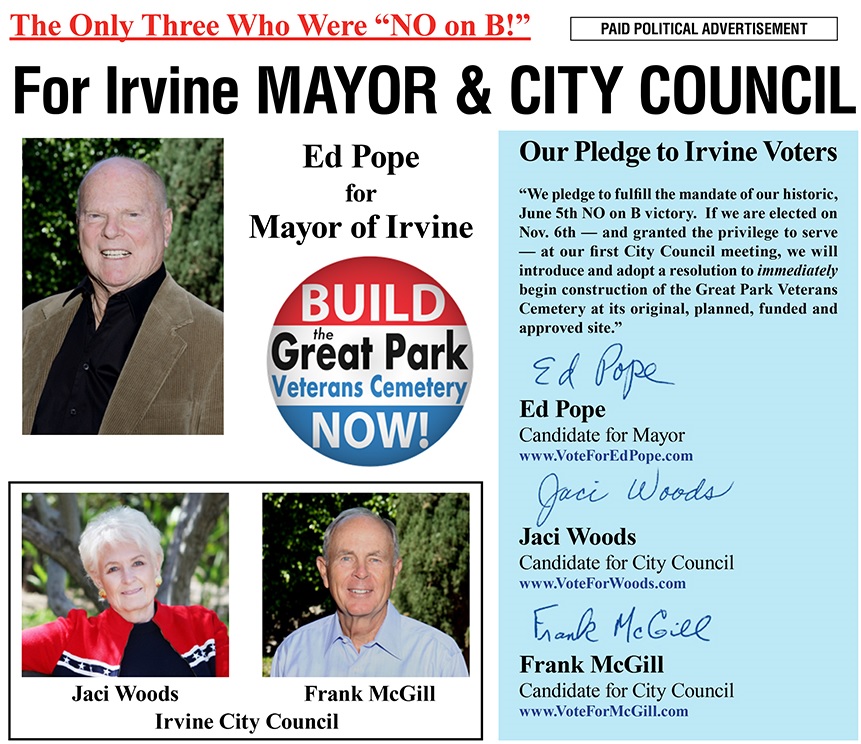 Honoring and Respecting the Will of Irvine Voters
Beginning last year, when Mayor Donald Wagner and two Councilmembers teamed up with developer FivePoint to replace the long-planned and approved Veterans Cemetery in the Great Park, three community leaders stepped forward to say “NO” to the corrupt landswap-and-development scheme — known as Measure B.

On June 5th, a majority of Irvine voters — 63 percent — voted “NO on B!”  This was an overwhelming Irvine voter mandate against massive development and for construction of the Veterans Cemetery at its originally planned and approved location, in the Great Park. Mayor Wagner and two City Councilmembers — Christina Shea & Melissa Fox — have refused to honor the will of the people.

Now, three courageous “NO on B!” leaders have stepped forward once again — this time as candidates for Mayor and City Council — with a solemn pledge to fulfill and implement the voters’ mandate so that the 125-acre property at the Great Park becomes our Veterans Memorial Park & Cemetery, not FivePoint’s next massive development project!

The “NO on B!” team will get to work right away to solve our traffic crisis.  Historically, the City issued between 1,500 and 2,000 residential building permits (for homes and apartment units) each year.  This Council has doubled that number, issuing 4,000 permits, without the necessary infrastructure in place.  No wonder Irvine traffic is horrendous!  We must return to strict controls on growth and development, which will ease traffic and improve our residents’ quality of life.