The Official Counting and Verification of Signatures on the Veterans Cemetery Referendum Petition Has Begun! 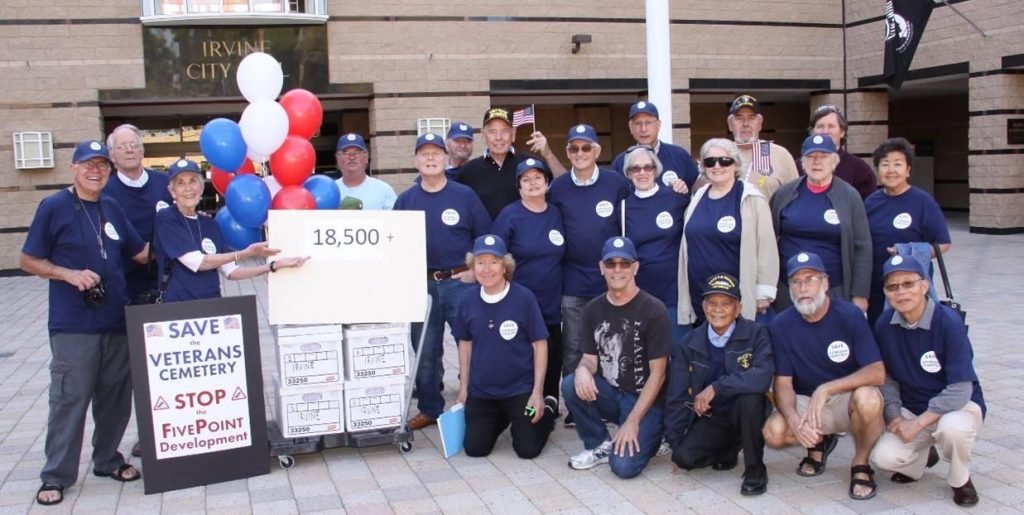 Twenty-two of the more than 100 Irvine volunteer signature gatherers showed up at City Hall on Thursday afternoon, November 9th, bringing with them five boxes containing a record-breaking “18,500+” Referendum Petition signatures to “Save the Veterans Cemetery in the Great Park” — as previously promised, planned and approved by the City, State and federal government.

In fact, the City Clerk’s preliminary count was 19,125 signatures, reflecting a last-minute surge of signatures turned-in to Referendum organizers the afternoon of November 9th, just 28 days after the Referendum campaign began.

The Petitions are now in the custody of the Orange County Registrar of Voters office for verification of the signatures’ validity.  To qualify for the Irvine ballot, 12,000 valid, registered Irvine voter signatures are required.  The Registrar of Voters is expected to certify the necessary number of signatures in the next 30 days, returning the matter to the Irvine City Council in December, or January, 2018.

At that point, the City Council will have three options: 1) Repeal its unpopular 3-2 decision to give away 125 acres of the Great Park — to developer FivePoint Communities — for conversion into 812,000 square feet of office and commercial development; 2) Put the matter on the ballot as requested in the Referendum Petition for a November 2018 regular City Council election; or, 3) Call an earlier, special election in the spring of 2018.