After a year-long investigation, the State Auditor’s Office has issued a scathing indictment of Irvine’s so-called “forensic audit” of the Great Park — an “audit” that was directed by City Councilmembers Christina Shea and Jeff Lalloway.

In a 75-page report, State Auditor Elaine Howle charged the Shea-Lalloway Audit Subcommittee with “poor governance,” including a rigged bidding process for selection of an auditing firm; no-bid contract extensions for the auditing firm; a failure to meet standard auditing practices; a lack of transparency and oversight; and what appears to be an unlawful abuse of power and misuse of $1.7 million in public funds for political purposes — to target then-Councilmember Larry Agran in the 2014 City Council election.

When a new City Council majority — Mayor Steven Choi and Councilmembers Christina Shea and Jeff Lalloway —took power after the 2012 City election, the three voted to dissolve the independent 9-member Great Park Board of Directors.  They put themselves in charge of the vast, 1,300-acre Great Park development project at the former El Toro Airbase; and they voted to initiate a “forensic audit” of the Great Park to examine all expenditures of public funds, dating back to 2005.

The forensic audit was projected to be a six-month study, budgeted to cost no more than $250,000.  Shea and Lalloway were appointed to serve on the two-member Audit Subcommittee, which wielded unprecedented power to meet secretly, to hire and fire auditors and attorneys, to issue subpoenas, take sworn depositions, and to apparently direct all aspects of what was supposed to be an independent audit.

But, according to the State Auditor, what emerged was not an independent audit at all.  Instead, the State Auditor concluded, it was a $1.7 million “waste” of public funds on what was apparently a publicly funded political investigation timed to influence the outcome of the 2014 City elections.

Corrupt from the Start 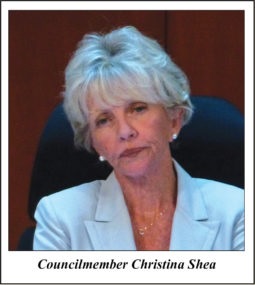 While the State Auditor’s report slams the two-member Subcommittee, sources close to the investigation reveal that Councilmember Christina Shea, now seeking re-election, took the lead in some of the worst of the abuses.  These included:

Lost in the back and forth is that from 2005 to 2012, as determined in more than a half-dozen previous independent audits, the financial affairs of the Great Park were in order.  All previous audits were “clean” — finding no evidence of unauthorized expenditures or unaccounted for funds.

And, interestingly, even the auditing and law firms that the Subcommittee relied on, HSNO and Aleshire & Wynder, could find no financial irregularities at the Great Park.

In fact, during the years 2005 to 2012, the entire 1,300-acre Great Park was master-designed, and about 200 acres — nearly 20 percent — of the Park was built at a cost of $133 million, including a number of major features that became operational.  In the 5-year period since the opening of the Park’s first iconic feature — the Great Park Balloon — in 2007, attendance at the Great Park grew to nearly 1 million visitors per year.

Since 2012, when the Choi-Shea-Lalloway majority took power and targeted Councilmembers Larry Agran and Beth Krom for attack, millions of dollars in taxpayer funds have been squandered on what Councilmember Beth Krom and former Councilmember Larry Agran called “a Great Park political witch hunt.”  Meanwhile, since 2012 — despite promises from Shea and others to “build the Great Park,” not even one new feature has been added at the Great Park.  And Park attendance has fallen by half.

Asked to comment on the State Auditor’s report, Agran said: “The Legislature’s highly respected and independent State Auditor documented that the so-called Great Park Audit Subcommittee — led by Christina Shea — failed to produce a forensic audit, as promised.  Instead, Shea conducted a publicly funded, $1.7 million political witch hunt.  This was clearly an illegal abuse of power and misuse of public funds for partisan political purposes.”

In describing Shea’s conduct as “illegal,” Agran was apparently alluding to prohibitions in State law that provide “a public agency may not spend public funds to promote a partisan position in an election campaign.”  The penalties for officials who violate these prohibitions are severe, including fines, imprisonment, and personal liability to reimburse the public agency for any misspent public funds.