Special Report: Myths and Facts about Building the Veterans Cemetery

For years now, Irvine Community News & Views has proudly advocated construction of the planned-and-approved (2014-2016) Veterans Cemetery at the “ARDA” site in the Great Park.  ICNV recently assembled a panel of experienced planners, architects and civil engineers familiar with the original Veterans Cemetery project and the various “alternatives” to the ARDA site that have more recently been put forward. This article summarizes the findings and conclusions of these professionals in an effort to focus on facts and dispel misinformation about building the Veterans Cemetery.

This spring the Irvine City Council will apparently “decide” between two Great Park sites for the Veterans Cemetery. One site is the original 125-acre ARDA site (Amended and Restated Development Agreement). [C on map] The ARDA site was planned and approved (2014-2016) by the City, State (CalVet), and U.S. Department of Veterans Affairs. The second site, the so-called “Golf Course” site, is now being promoted by Councilmembers Christina Shea (now Mayor) and Melissa Fox, as yet another alternative Veterans Cemetery site. [D on map]

Shea, Fox and others are apparently relying on three fallacious arguments to again jettison the ARDA site, this time in favor of the Golf Course site. Their three arguments are: Timeliness, Cost and Contamination. 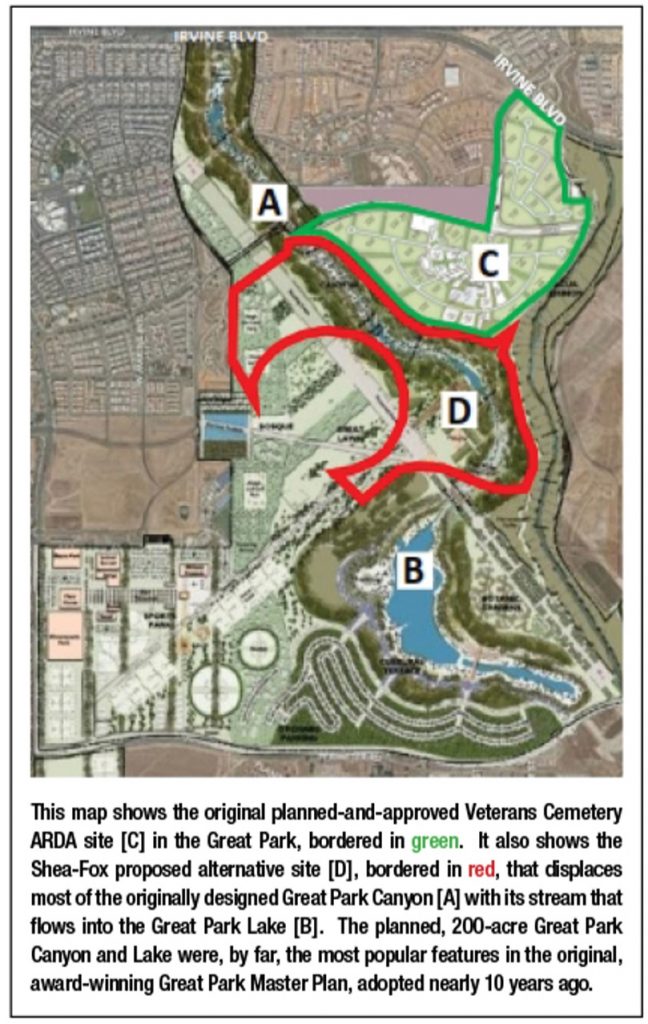 TIMELINESS
It’s important to remember that if the originally planned and approved (and funded) project to begin building the Veterans Cemetery on the ARDA site had not been derailed by Mayor Wagner and Councilmembers Shea and Fox in early 2017, the first phase of the beautiful 125-acre Great Park Veterans Cemetery would now be nearing completion, ready to be operational by the original target date — Veterans Day, November 11, 2019. This would have been in accordance with the 30-month construction Timeline set forth in the 333-page CalVet-approved Concept Plan.

The planning staff for the City of Irvine recently prepared a Timeline comparing construction of the Veterans Cemetery at the ARDA site with the Golf Course site.

The City staff report claims that it would take nearly seven years for either the Golf Course site or the ARDA site to be constructed and become operational.  But, of course, the truth is that the construction Timeline for the ARDA site in the CalVet Concept Plan is just 30 months.

COST
Shea and Fox have repeatedly asserted, without any evidence whatsoever, that it’s too costly to build the Veterans Cemetery at the ARDA site, and that it would be cheaper to build it elsewhere. After thorough study, CalVet’s Concept Plan estimated (in 2016) that it would cost $77.4 million to prepare the entire 125-acre ARDA site and complete Phase 1, which would accommodate the first ten years of burials. Moreover, the Concept Plan for the ARDA site can accommodate the preservation and repurposing of historic structures, such as the iconic aircraft control tower and airplane hangars. This presents a remarkable opportunity that does not exist elsewhere.

According to experienced civil engineers, the CalVet cost estimate for the ARDA site seems reasonable. However, the Shea-Fox Golf Course site necessitates removal of about 700,000 square feet of the massive airbase runway that is as much as 40” thick. The runway removal would surely cost tens of millions of dollars.

In addition, the Golf Course site lacks essential infrastructure leading to the site, something the ARDA site already has on three sides. Since the Golf Course site has not been investigated for a Veterans Cemetery, there will surely be additional, as yet unknown costs.

TOXIC CONTAMINATION
Unfortunately, discussions of toxic contamination of the ARDA site have been tainted by ignorance and misrepresentations to make it seem as if the entire site is beset with toxic contamination. The fact of the matter is that there are only two known sources of contamination: 1) About one-third of the original 1-acre MCAS El Toro landfill lies within the boundary of the 125-acre ARDA site. This landfill lies within the final 10-year phase of Cemetery development — not to be built for 90 years. 2) Some of the buildings that are slated for demolition on the ARDA site are contaminated by asbestos, and by lead in the immediately surrounding soil. The costs to remove the asbestos and lead-contaminated soil are listed in the Concept Plan: $3.4 million.

The chance of finding additional, as yet unknown, soil contamination is no greater on the ARDA site than in the soil under the nearby Great Park Neighborhood homes or anywhere else on the former airbase.