Due to the ongoing COVID-19 pandemic, the 2021 Oscars have been pushed back from their usual February date.  The awards ceremony is now scheduled to take place in April.

One of the films receiving a lot of Oscar buzz this year is Sound of Metal, particularly for the film’s lead actor, Riz Ahmed. 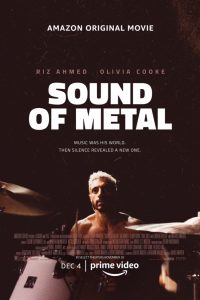 Sound of Metal follows the life of Ruben (played by Ahmed), who is a former drug addict and musician who plays drums for a punk rock band.  Ruben lives in his van with the band’s lead singer (and Ruben’s girlfriend) Lou.  Ruben and Lou are living happily together, with a life centered around their love of music.

Ruben notices that his hearing is getting worse and worse.  After visiting a series of doctors, he discovers that his worst nightmare is coming true.  He is going deaf.

Struggling to cope with time away from his band, his girlfriend, and his true love: music, Ruben finds a sober living house for the deaf.  There, he learns how to read lips, use sign language, and deal with the possibility of never being able to hear music again.

Though this could have been a very predictable movie, Ahmed’s embodiment of this complex character shines throughout the film.  Ahmed has received rave reviews for his passionate performance.  Along with a possible “Best Actor” nomination, Sound of Metal is also a front-runner for sound and sound editing awards for the movie’s innovative sound methods.

Sound of Metal is currently available on the Amazon Prime Video streaming service, which is included if you are an Amazon Prime member.  The film currently has a 96% score on Rotten Tomatoes.  You can read more about the movie here by clicking here.

Keep an eye out for next month’s movie review.