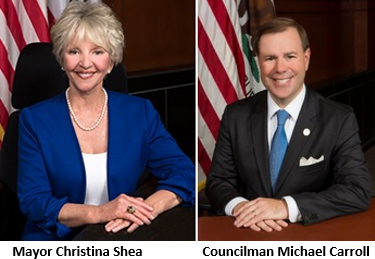 The Mayor of Irvine has the power to set the agenda for City Council meetings — deciding what is put on the agenda … and when.  Appointed Mayor Christina Shea appears to be using that power to stall and even shut down public investigation into Councilman Mike Carroll’s misuse of Irvine taxpayer funds for his own personal and political benefit.

Since August, appointed Councilman Mike Carroll has been at the center of a growing City Hall scandal involving the Councilman’s unauthorized expenditure of $72,000 on mass mailings to Irvine residents.  The expensive mailings, which began last year, were designed to promote Carroll and a series of town hall meetings he was hosting.  The City Council never authorized the mass mailings.

It is a violation of established City policy and strict State laws for Councilmembers to misappropriate and spend taxpayer money on unauthorized mailings for personal or political purposes.  Carroll, who was appointed, not elected, to fill a Council vacancy in 2019, is now running in the Nov. 3rd City Council election, trying to hold onto his seat.

Although Mayor Shea wrote a memo in August initially expressing anger when she learned of Carroll’s misuse of taxpayer funds, she quickly backed off and has remained silent on the matter for weeks.  Only recently did Shea say that the matter would come up at the October 27th “budget review” — an odd time and context for inquiring into apparent wrongdoing.

October 27th is just one week before Election Day.  By then, it is expected that tens of thousands of Irvine vote-by-mail ballots will have already been cast.  Moreover, Shea, wielding the gavel at Council meetings, can use her power as Mayor to keep the matter contained, even buried at the Council meeting, when the “budget review” item comes up.  She can even postpone consideration of the matter altogether.

Shea appears highly motivated to keep the lid on any City Hall scandal.  She is on the Nov. 3rd ballot, running for Mayor with the ballot designation “Appointed Irvine Mayor.”  Mike Carroll, also appointed, is running for a 4-year Council term, claiming the title “Vice Mayor.”  Shea and Carroll have both been endorsed by the Republican Party of Orange County, no doubt with the expectation that they will run together — and get Party support together — as endorsed pro-Trump Republicans.  (Also endorsed by the Party — and part of the Republican team — are Carrie O’Malley and John Park, running for City Council.  Irvine voters have one vote for Mayor and can vote for 3 candidates for City Council.)

Former Irvine Mayor Larry Agran — who is currently challenging Carroll for a seat on the Council — issued a statement, weighing-in on the growing City Hall scandal: “By using taxpayer funds for unauthorized self-promotional letters, Mike Carroll has clearly violated multiple policies and procedures that the City has long had in place.  Carroll appears to have also violated State law that protects Irvine citizens from misappropriation of their taxpayer dollars.  He should be held to account.”

Addressing the apparent stall by Shea, Agran added: “This is the kind of corruption at City Hall that the Mayor and City Council should be publicly addressing without delay.  The fact that the Mayor and Council are not confronting this matter publicly is in itself a form of corruption and an indication of a cover-up by Shea and Carroll in advance of the Nov. 3rd election.”

Lauren Johnson-Norris, an attorney running for Council and — along with Agran — endorsed by Irvine Community News & Views, issued her own statement.  In it, she said: “I call upon the Mayor to convene a special meeting of the Irvine City Council to publicly ask the so-far unanswered questions about Councilman Carroll’s taxpayer-funded mailings; to acknowledge any wrongdoing that is found; and to insist on restitution of any and all misappropriated Irvine taxpayer funds.”